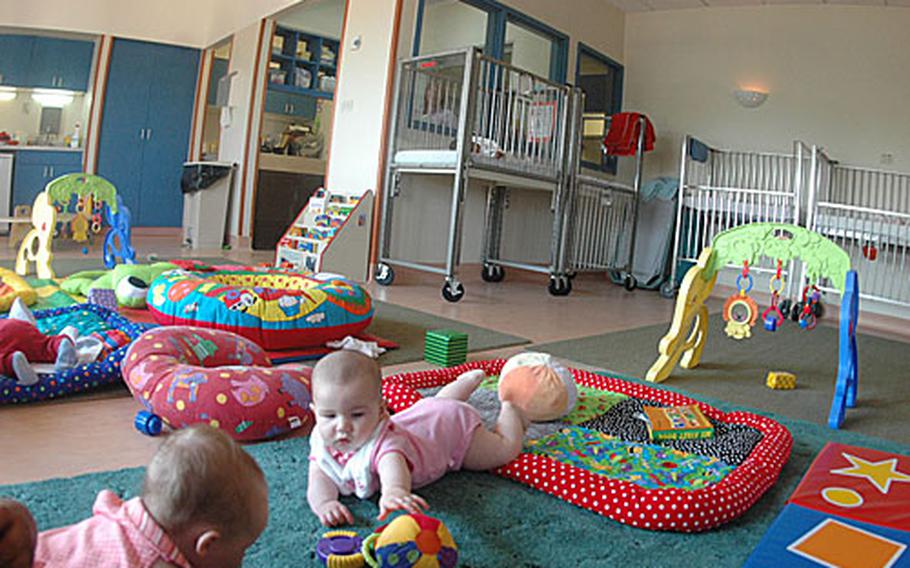 Infants Gabriella Downing, left, and Audrey Pankop play in the newly renovated infant room at the Child Development Center on the Capodichino base of Naval Support Activity Naples, Italy. An early-morning blaze March 13 started in the infant room, which sustained severe fire, smoke and water damage. The center had been closed for repairs and renovations. (Sandra Jontz / S&S)

NAPLES, Italy &#8212; The Capodichino base child development center reopened this week after a mid-March fire gutted parts of the center.

The March 13 fire, which started on an interior wall of the infant room, happened before the center opened for the day and no one was yet inside.

Base security spotted the fire and it was put out by base firefighters.

Staffers worked to find exact or similar replacement toys and supplies to help keep a consistent atmosphere for the children, said Tricia Hooverson, the Capodichino center director. &#8220;Change is hard for everyone, even the little ones.&#8221;

No one has given Hooverson a definitive cause, but she said officials suspect it was an electrical fire that started in the walls.

Navy Seabees repaired areas damaged by fire, smoke and water, and rebuilt bookcases for the 40 children who had been displaced.

Most of the children temporarily were transferred to the support site center at Gricignano.

Some parents who work or live near the Allied Joint Force Command base in Bagnoli, about a 40-minute drive from the support site, opted to find short-term care near that area, Carlson said.

&#8220;However, they have all returned, which has made us very pleased and I feel speaks to the quality of care provided by the staff,&#8221; Carlson said.