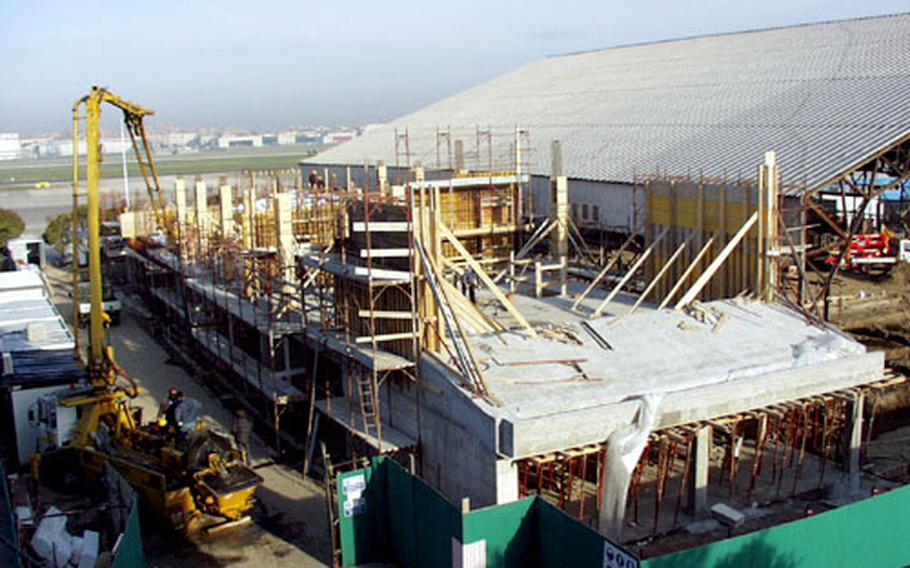 Workers lay cement at Naval Support Activity Naples’s Hangar 406 on Tuesday. The hangar in Italy is going through a major renovation, and is expected to be completed March 2005. (Jason Chudy / S&S)

NAPLES, Italy &#8212; Work is continuing on one of two aircraft hangars at Naval Support Activity Naples during a nearly two-year, $3.5 million renovation.

Work on Hangar 406 started in May 2003 and is expected to be finished by March 2005. The hangar is undergoing a top-to-bottom renovation, from portions of its concrete foundation to new roofing. It will also have more floor and office space.

Walker said that the base chaplain&#8217;s office will also have an office in the new hangar.

Hangar 406 is across from the east entrance of the main gate parking garage at the Capodichino complex. The base shares the airport&#8217;s single runway with civilian aircraft from the nearby international terminal.

Air operations is using the base&#8217;s other aircraft hangar, north of the main gate, for its two C-26 Metroliner transport aircraft.

The aircraft will share the hangar with a detachment from Helicopter Combat Support Squadron 2, which flies an H-3 Sea King used by the U.S. 6th Fleet flagship USS La Salle, as well as other deployed or transient aircraft.

Once renovations are done, the C-26 aircraft and HC-2 detachment will move into Hangar 406 and the other hangar will be torn down.