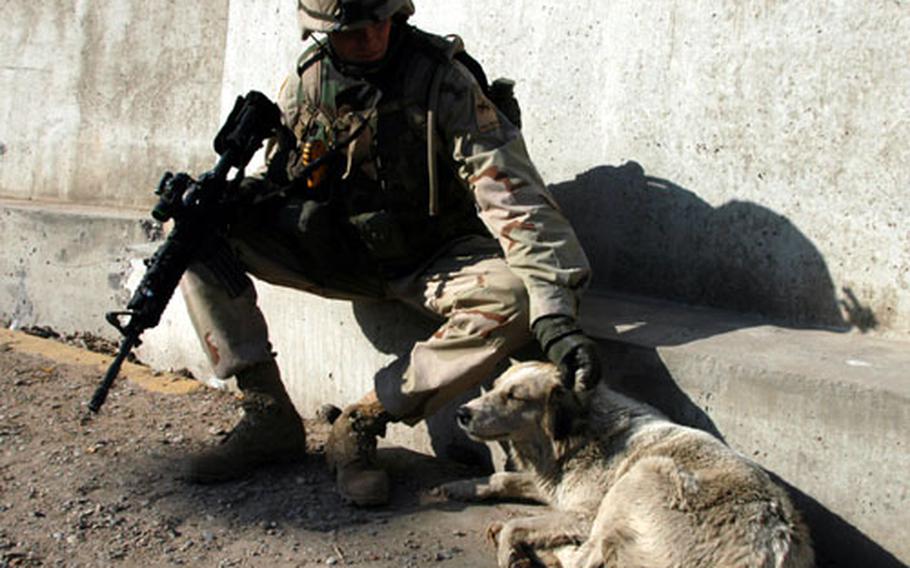 Near the Palestine Hotel in Baghdad, Iraq, Staff Sgt. Tim Litwin, 38, of Paris, Tenn., pets Lucy, a dog who&#39;s been a constant companion to U.S. troops ever since the fall of Baghdad last spring. Litwin is a squad leader with the 1st Armored Division&#39;s Company B, 1st Battalion, 36th Infantry Regiment. (Franklin Fisher / S&S)

Near the Palestine Hotel in Baghdad, Iraq, Staff Sgt. Tim Litwin, 38, of Paris, Tenn., pets Lucy, a dog who&#39;s been a constant companion to U.S. troops ever since the fall of Baghdad last spring. Litwin is a squad leader with the 1st Armored Division&#39;s Company B, 1st Battalion, 36th Infantry Regiment. (Franklin Fisher / S&S) 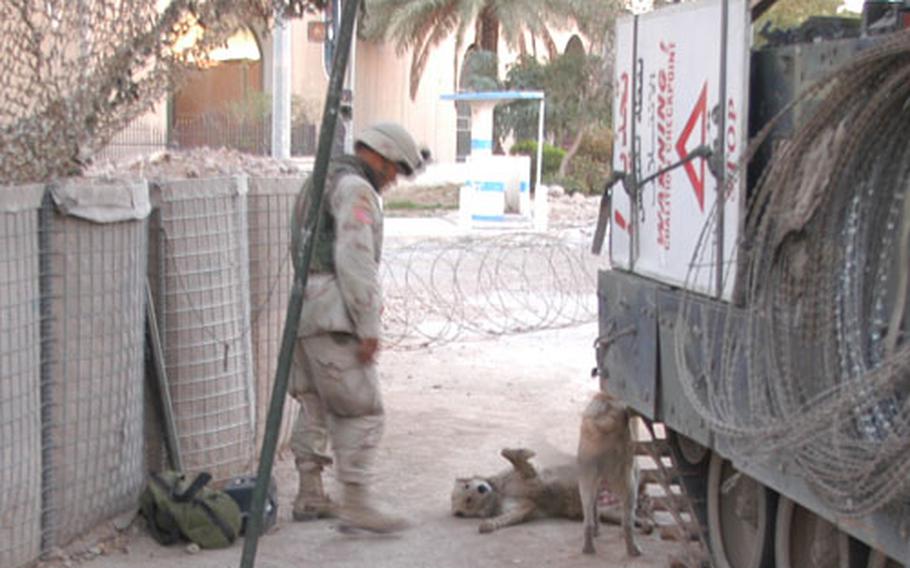 In Baghdad, Iraq, Pfc. Pedro Flores, 20, of New York City, watches the antics of two of the three dogs that have become constant companions of troops at a security strongpoint near the Palestine Hotel. Flores, a Bradley fighting vehicle driver with the 1st Armored Division&#39;s 1st Battalion, 36th Infantry Regiment, looks on as the dog they call Lucy rolls onto her back, a favorite position of hers for petting. On its hind legs and partially hidden is her pup, Litefighter. (Franklin Fisher / S&S) 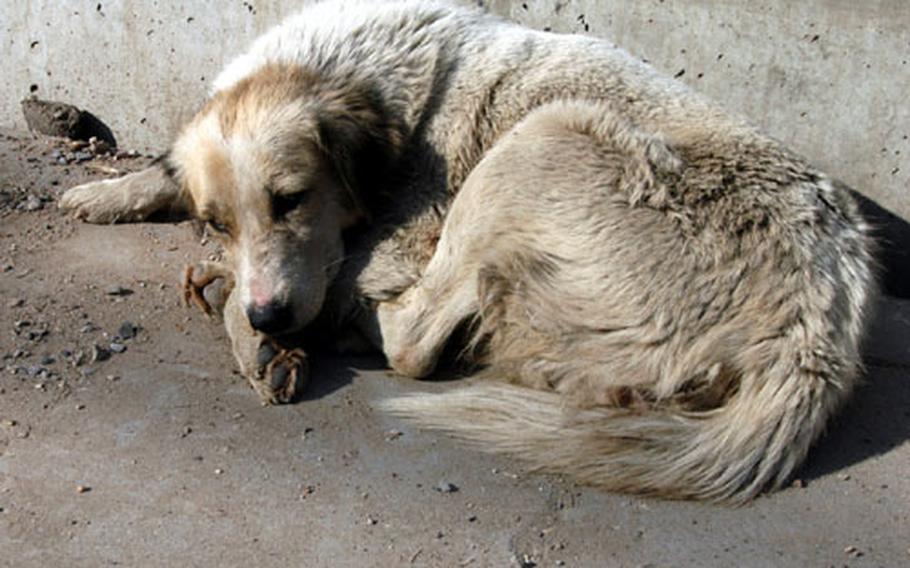 A dog U.S. soldiers in Baghdad, Iraq, have named Lucy, rests in the sun near the Palestine Hotel. Lucy has been living at an American security strongpoint near the hotel ever since the fall of Baghdad last spring. She, her pup, Litefighter, and a German shepherd named Shellie, have become fast friends with the soldiers. (Franklin Fisher / S&S)

BAGHDAD, Iraq &#8212; When U.S. troops rolled into Baghdad at the climax of the war last spring, some of them took up security posts by the Palestine Hotel near the east bank of the Tigris River.

A white dog came on the scene, got friendly with the troops, and stayed.

Those soldiers were with the 3rd Infantry Division. Later, their division pulled out and was replaced by the 1st Armored Division.

But the dog, whom somebody had named Lucy, stuck around and found that the American soldiers of one unit could be just as affectionate and gentle as those of another, that sleeping under one Abrams tank affords just as much shelter from sun or rain as another.

And in all the months since, the soldiers who rotate through the security posts near the Palestine have had a constant companion. They, in turn, have given Lucy not a house, but a home.

&#8220;If you go somewhere, that dog will be right there with you,&#8221; said Sgt. 1st Class Daniel Barrett, 37, of Clearwater, Fla., a platoon sergeant with Company B, 1st Battalion, 36th Infantry Regiment, part of the 1st Armored Division.

But, partly thanks to Lucy, the troops at the Palestine have not one dog, but three. The other two are Lucy&#8217;s son, the brown-and-white Litefighter &#8211; the nickname of Fox&#8217;s platoon; and Shellie, a young German shepherd who &#8220;came out of nowhere one day,&#8221; said Fox, and got along with everyone, man and dog. Litefighter was born about 7 months ago, said Fox, and he thinks Shellie&#8217;s maybe a month or two older.

The dogs trot easily in and out of the razor wire, bask in the sun, grab a nap under an Abrams or Bradley.

Sometimes Torrito aims his red laser pointer on the ground in a circle and Litefighter and Shellie run themselves silly trying to catch it.

And at night, the dogs go fully tactical.