Cancer changes everything for soldier 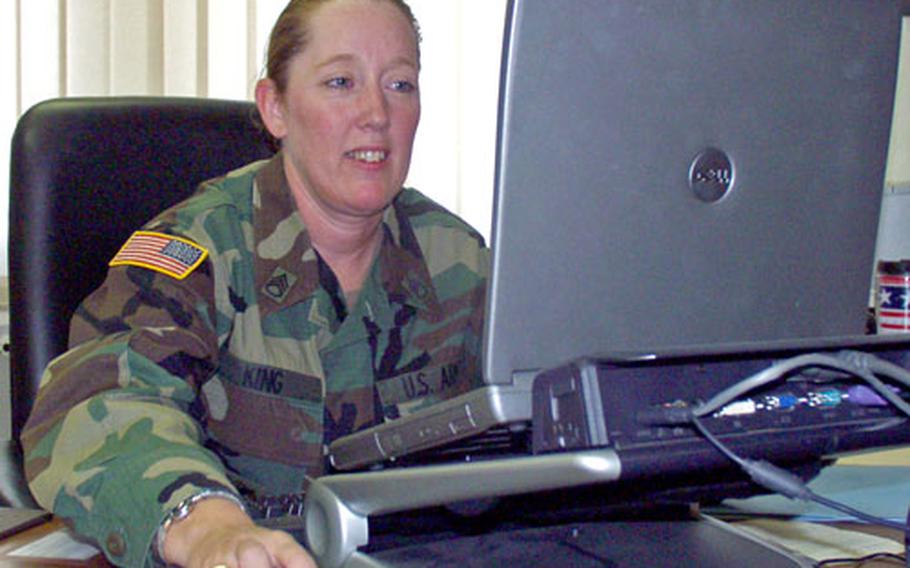 Even when she was suffering through chemotherapy in Texas three years ago, Staff Sgt. Scarlet King, now a career counselor with the 1st Infantry Division’s retention office, re-enlisted double her quota of soldiers. King had a malignant tumor wrapped around her spinal cord. (Steve Liewer / S&S)

During field maneuvers with her troop from the 2nd Armored Cavalry Regiment at Fort Polk, La., one January day in 2002, King jumped out of the back of a Humvee and fell on her backside.

The fall left an ugly bruise on her tailbone. The 12-year veteran soldier simply ignored it.

Except the bruise did not go away. Three months later she reluctantly visited a doctor. After viewing X-rays, he delivered the harsh diagnosis: a malignant tumor had wrapped itself around the lower end of her spinal cord. She risked paralysis, or worse.

Not much about the slight, soft-spoken redhead suggests the toughness inside. She grew up in Seaside, Calif., where her adoptive father was a drill sergeant who would retire as a command sergeant major.

King became a single mother at 16. Ten years later, she had three little boys and quit her job as a hairdresser to join the Army in hopes of giving them a better future.

Juggling the demands of soldiering and motherhood while working toward a college degree in her &#8220;spare&#8221; time was challenging, to say the least, especially when she served a year in Korea. But she thrived on the structure of Army life, she said.

Never was it harder than after her cancer diagnosis. Within a month, she took a medical transfer from Fort Polk to Fort Sam Houston, Texas, so she could get treatment at Brooke Army Medical Center, one of the Army&#8217;s premier hospitals. Her mother, Honey Hewlett &#8212; who had moved in with King in 2001 after the death of Hewlett&#8217;s husband &#8212; followed soon afterwards.

For nine months, she endured twice-weekly chemotherapy treatments that left her nauseous and vomiting. Her sons and her mother helped as much as they could.

King kept up her duties as a career counselor, helping to re-enlist soldiers. She viewed work as a critical part of her therapy. Her mother says she put in evenings and weekends, hitting 200 percent of her re-enlistment quota during her illness.

The treatments shrank the tumor, but her legs continued to ache from pressure on her sciatic nerve. In 2003, her doctors decided to operate in spite of the danger of paralysis. They inserted four titanium bolts and eight drops of synthetic bone (at $5,000 per drop). The surgery succeeded, but she had to stay in bed during a long recovery. Her sons arranged to sit up with her around the clock.

In late August 2003, she learned her cancer was in remission. But the roller-coaster wasn&#8217;t over yet. The next day, Hewlett visited a doctor about a large growth on her elbow she thought was bursitis.

It turned out to be a cancerous tumor that required immediate, aggressive treatment. Overnight, the patient became a caregiver &#8212; though a wiser one, because of her own experience. Now Hewlett, too, is in remission.

Mother and daughter now both get annual checkups. They are cautious but optimistic that they&#8217;ve beaten the dreaded disease. And both sing the praises of military medicine.

King said she used to be a driven, Type A personality. That&#8217;s changed.

She credits the Army with, quite literally, saving her life.