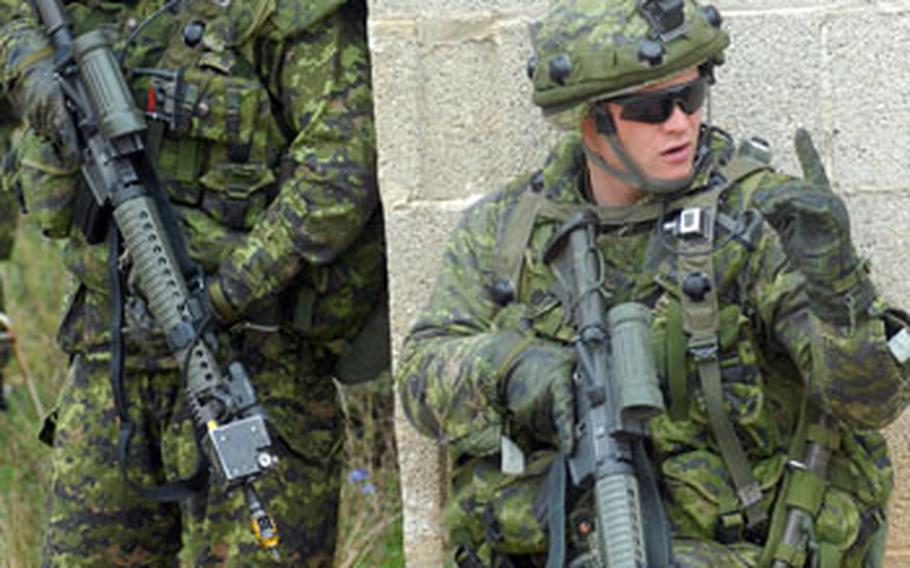 HOHENFELS, Germany &#8212; When Canadian soldiers deploy to Afghanistan they usually go for only six months and get a hefty bonus for being there.

That&#8217;s something U.S. soldiers, who recently had their deployment times cut from 15 to 12 months, were quick to discover during this month&#8217;s Cooperative Spirit exercise at Hohenfels&#8217; Joint Multinational Readiness Center.

Comparing pay and service conditions is something soldiers from different armies usually do when they are involved in multinational operations. And this month&#8217;s exercise involving soldiers from the U.S., Britain, Canada, Australia and New Zealand was a good chance to do just that.

Canadian Cpl. Rob Hovey, 25, of Miramichi, New Brunswick, said, based on his conversations with U.S. soldiers, he believes his army has the best pay and conditions.

Canadian dollars were trading slightly higher than U.S. dollars on Monday. But Hovey said he didn&#8217;t join the Army for the money.

"It was more of a family tradition," he said.

While Cooperative Spirit has been a chance for the troops to compare jobs, its actual purpose is to test the armies&#8217; ability to cooperate.

For example, the Canadians assume that they must be observing a route for it to be "clear" whereas the Americans consider it clear once it has been checked for roadside bombs.

And the armies have different caveats constraining the way they operate downrange. Americans allow any soldier to question a person who has been detained, whereas the Canadians have trained personnel charged with questioning detainees, Callis said.

Cooperative Spirit is based on an Afghanistan scenario, which makes sense since all five armies have deployed troops there.

The commander of one of the two Canadian infantry companies involved in the exercise, Maj. Steve Noel, 37, of Saint John, Newfoundland, said his nation has been involved in the Afghan mission since 2001. Canadian forces were originally based in Kabul, but moved to Kandahar in 2004. Noel said he deployed there in 2006 as part of a Provincial Reconstruction Team.

"The [Canadian] soldiers are committed for as long as we are there," he said. "We are going to do our job. We are making great impact in Afghanistan and we have been for six years. We are going to go where we are told to go and do the job."