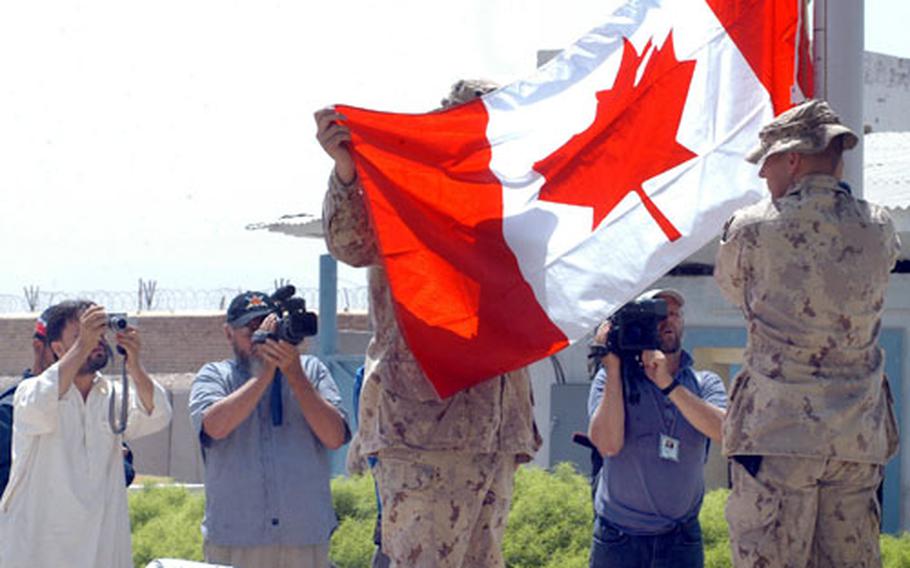 Soldiers from the Canadian Army prepare to raise the nation&#39;s flag over the Kandahar Provincial Reconstruction Team Tuesday as members of the Canadian and Afghan media videotape and photograph the event. (Jason Chudy / S&S)

Soldiers from the Canadian Army prepare to raise the nation&#39;s flag over the Kandahar Provincial Reconstruction Team Tuesday as members of the Canadian and Afghan media videotape and photograph the event. (Jason Chudy / S&S) 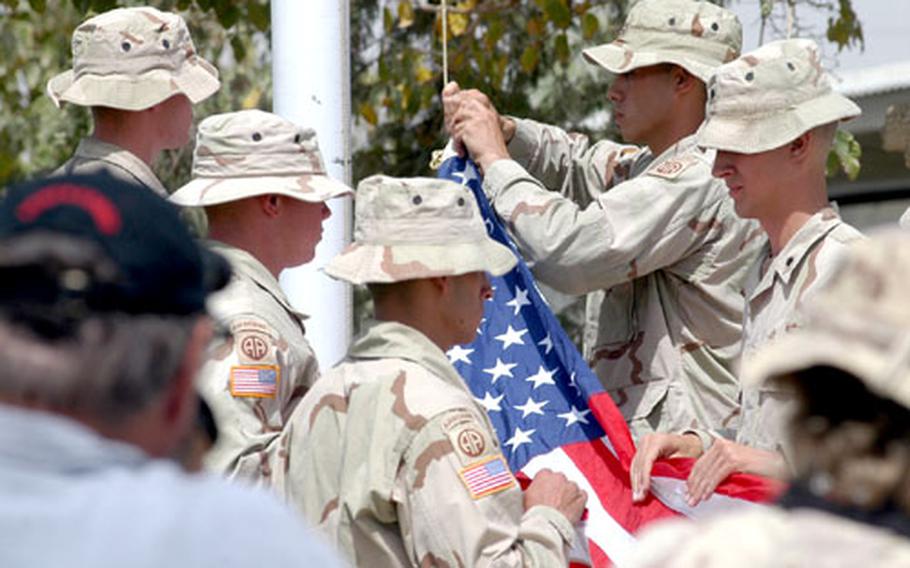 Soldiers from the 82nd Airborne lower the flag at the Kandahar Provincial Reconstruction Team for the final time Tuesday as Canadian forces took over control of the facility. (Jason Chudy / S&S)

This is Canada&#8217;s first PRT in Afghanistan, with more than 1,000 troops expected to be in the province by February as part of NATO&#8217;s expanding role in the south, according to Canadian army Col. Steve Bowes.

During a transfer of authority ceremony at the PRT headquarters, located in an old cannery in the north-central part of the city, Canadian Ambassador to Afghanistan Chris Alexander promised to build on the U.S. success in Kandahar.

About 90 U.S. soldiers and civilians from the 492nd Civil Affairs Battalion, 107th Engineer Battalion and the 321st Civil Affairs Brigade, along with U.S. aid agencies, have been replaced by about 250 Canadian soldiers, Royal Canadian Mounted Police and civilian aid workers.

The move means that of the country&#8217;s 22 PRTs &#8212; responsible for a variety of civil projects ranging from digging wells to building schools &#8212; only 10 remain under American control. There is one PRT that is jointly operated by U.S. and South Korean forces.

The incoming Canadian troops already were patrolling the city before Tuesday&#8217;s turnover. In fact, soldiers secured the site of a bomb blast at a central Kandahar market last week.

It&#8217;s fitting that the soldiers were so quickly called on to provide a security presence, Alexander said, because security is one of the PRTs&#8217; main missions.

&#8220;Our job is to restore stability and strength,&#8221; the ambassador explained, standing about 10 feet from a flagpole flying the Canadian Maple Leaf flag.

Alexander said that without security, the troops could not work on their other goals to improve access to government services throughout the province and accelerate and develop existing reconstruction efforts.

Security also will increase with the addition of three brigades of Afghan National Army troops that are expected in the area &#8220;in the coming months,&#8221; Alexander said.

Kandahar province Gov. Asadullah Khan thanked the outgoing American units and welcomed the incoming Canadians. He told the gathered guests through an interpreter that &#8220;the world community&#8217;s presence means that they support us and will continue to do so until we don&#8217;t need their support.&#8221;

But until that support isn&#8217;t needed, said U.S. Army Brig. Gen. Jack Sterling, deputy commander of Combined Joint Task Force 76, forces at the PRT will continue the work that the PRT staff has done since its opening in 2003.