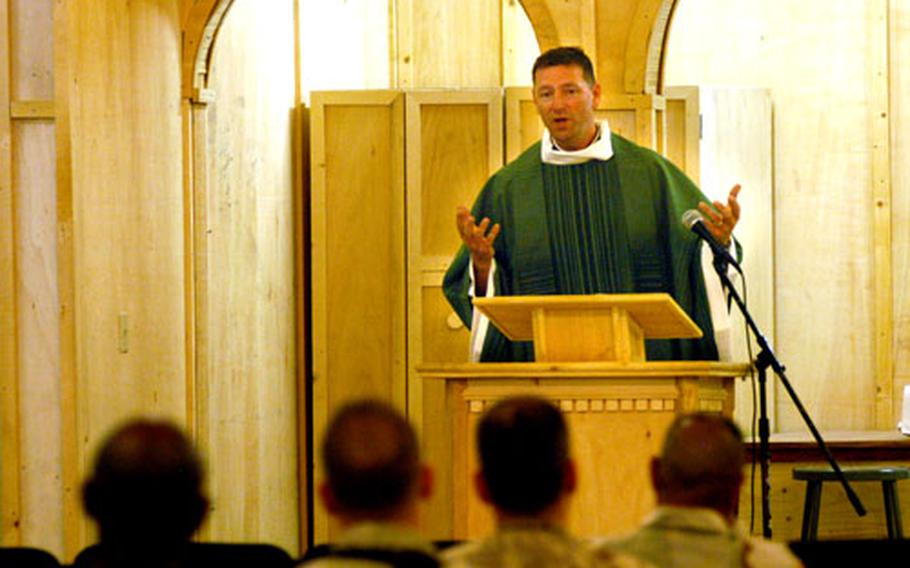 KANDAHAR, Afghanistan &#8212; Evening Mass at Fraise Chapel wasn&#8217;t celebrated any differently than on other Saturday nights.

But instead of a U.S. military priest conducting the service, Canadian army Chaplain (Capt.) Paul Acton ministered to the small group of Catholics.

Though this was his first Mass in Kandahar, he&#8217;ll become a familiar site at the wooden-framed and tin-roofed chapel in the next few months, conducting services for Catholics of the various nations making up the base&#8217;s military contingent and civilian work force.

Ecumenical is defined as both relating to the worldwide Christian church and establishing and promoting unity among churches and religions.

The Canadian army is deploying about 250 soldiers to the Kandahar area and will soon take over the Provincial Reconstruction Team from U.S. forces.

Acton is part of the Joint Signals Regiment from Kingston, Ontario, which typically is one of the first units to deploy to an area, setting up communications and preparing for a larger group of soldiers.

Once the bulk of the 250 soldiers arrives and starts operating, he&#8217;ll be splitting his ministering between the Kandahar Airfield and the PRT.

Acton&#8217;s presence should become a familiar sight to the various nations making up the Kandahar congregation.

He arrived about a week ago and will be in Afghanistan for the next few months, sharing the responsibilities of celebrating Mass with U.S. Army chaplains.

After Saturday&#8217;s Mass, congregation members filed past Acton, shaking his hand and passing along their greetings. A few Canadian soldiers attended the service along with nearly a dozen U.S. military members and a handful of civilian base workers.