Canada sends helos, drones to back up troops in Afghanistan 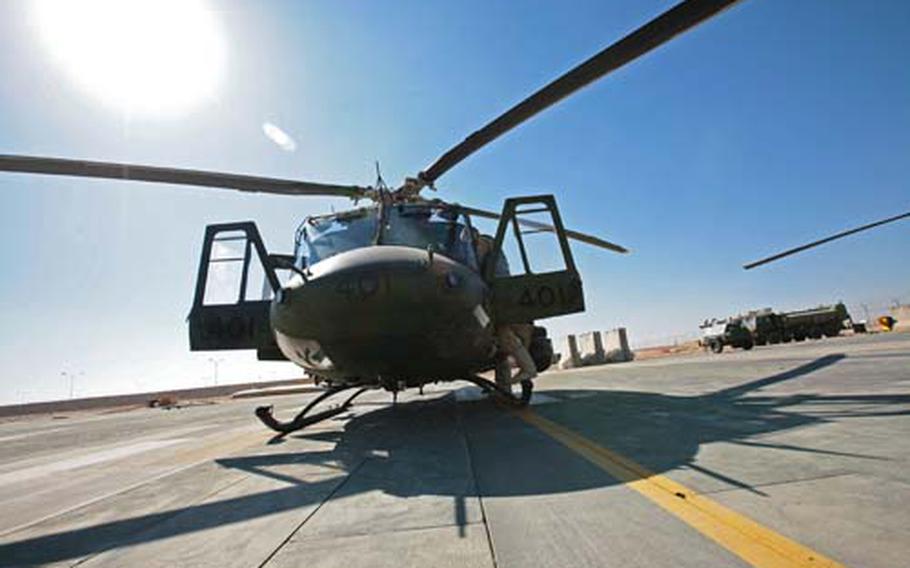 A Canadian pilot prepares a Griffon escort helicopter for a mission at Kandahar Airfield, Afghanistan. Canadian forces started operating a contingent of helicopters and unmanned aerial vehicles in December to support their troops and other NATO forces in southern Afghanistan. (Drew Brown / S&S)

A Canadian pilot prepares a Griffon escort helicopter for a mission at Kandahar Airfield, Afghanistan. Canadian forces started operating a contingent of helicopters and unmanned aerial vehicles in December to support their troops and other NATO forces in southern Afghanistan. (Drew Brown / S&S) 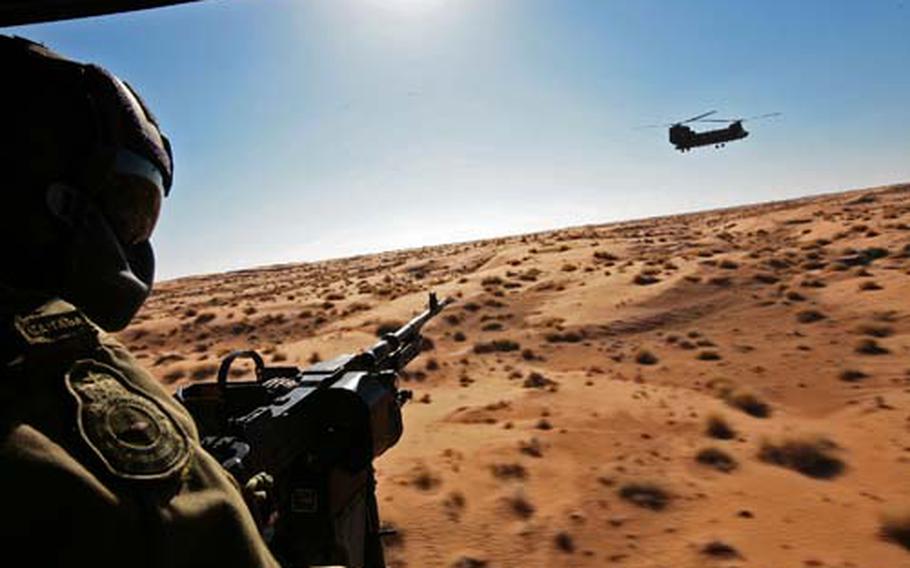 Cpl. Igor Navarro mans a machine gun on a Canadian Griffon escort helicopter during a training mission over the red sands of the Dasht-e-Margow, or “Desert of Death,” south of Kandahar, Afghanistan, on Friday. Canadian forces have recently started operating a small wing of helicopters and unmanned aerial vehicles to support their troops and other NATO forces in southern Afghanistan. (Drew Brown / S&S)

KANDAHAR, Afghanistan &#8212; Canada has boosted its forces in southern Afghanistan with a new contingent of helicopters and drones, a move that senior military officers say will reduce the number of ground convoys used to supply remote bases and better protect soldiers against Taliban fighters.

The addition of the new aircraft comes as U.S. attention shifts from Iraq to Afghanistan and as the NATO-led international coalition renews its focus on Kandahar, Helmand and other southern provinces, which have seen a sharp rise in bombings, assassinations and other Taliban violence in the last two years.

"There are never enough aircraft and helicopters to support operations," said Col. Christopher Coates, commander of the Canadian air wing in Kandahar, during an interview last week. "Certainly, it&#8217;s a recognition that there is a need for more aviation support."

A study commissioned by the Canadian parliament recommended last year that Canada purchase new medium-lift cargo helicopters and high-performance surveillance drones. The study, known as the Manley Report, concluded that Canadian soldiers "currently rely too much" on allied forces to provide those capabilities.

The panel also recommended that Canada give up security responsibility for Kandahar if other countries did not post more soldiers to the province or if the aircraft were not purchased.

Canada has 2,800 soldiers in Afghanistan, most of which operate in Kandahar province. They were joined last summer by about 800 soldiers from the U.S. Army&#8217;s 2nd Battalion, 2nd Infantry Regiment.

Canada deployed the new aircraft amid an overall buildup of military forces in southern Afghanistan. The Pentagon is preparing to dispatch as many as 30,000 additional troops to the country over the next year and a half, many of which are expected to deploy to southern regions, almost doubling the current U.S. force in Afghanistan of 35,000 troops.

The U.S. 3rd Brigade, 10th Mountain Division has begun deploying soldiers to Wardak and Logar provinces, south of the Afghan capital of Kabul. At least one more brigade &#8212; about 3,500 soldiers &#8212; is expected to arrive in Afghanistan by summer.

NATO Secretary General Jaap de Hoop Scheffer has also called on other NATO countries to provide up to 10,000 additional troops for up to four months to help provide security for the presidential election currently scheduled for August.

The NATO-led International Security Assistance Force consists of about 55,000 troops from 41 nations, but about half of those are U.S. forces. More than 10,000 other U.S. troops also operate in Afghanistan under separate commands.

Several countries, including the United States, Britain, the Netherlands and France, operate aircraft in southern Afghanistan, but helicopters, especially, remain in short supply. Military officials say they are a crucial asset in a country which has few paved roads and is dominated by vast stretches of mountains and deserts.

Defense Secretary Robert Gates has been calling upon NATO countries for more than a year to contribute more helicopters and other equipment to the war in Afghanistan, but many pledges of help have yet to be fulfilled.

The Pentagon announced in December that the 82nd Combat Aviation Brigade from Fort Bragg, N.C., would deploy to Afghanistan this spring.

The six Canadian Chinooks were purchased from the United States and delivered to Canadian forces in December by the U.S. Army&#8217;s 6th Battalion, 101st Aviation Regiment as that unit redeployed to the United States, Coates said.

Coates said the aircraft will be used not only to supply Canadian forces, but will also ferry equipment and soldiers to other NATO bases throughout southern Afghanistan.

But Canadian forces haven&#8217;t flown the Chinook since 1992, so pilots and crews have spent much of the past month flying training missions, Coates said.

Some of the Canadian helicopters have already flown combat missions, but the aircraft will not be considered fully operational until a sufficient number of pilots and crews are trained, a process that could take another four to eight weeks, Coates said.

The smaller Griffon utility helicopters will be used primarily to escort the Chinooks, but can also fly surveillance and reconnaissance missions, Coates said.

The Canadian military last week announced that it had also begun operating Heron unmanned aerial vehicles in Kandahar province. The drones should help reduce Taliban attacks by providing troops with the ability to scout convoy routes around the clock and detect fighters trying to plant bombs, officials said.