Can the Army fight without a network? New service secretary focused on tech-savvy enemies 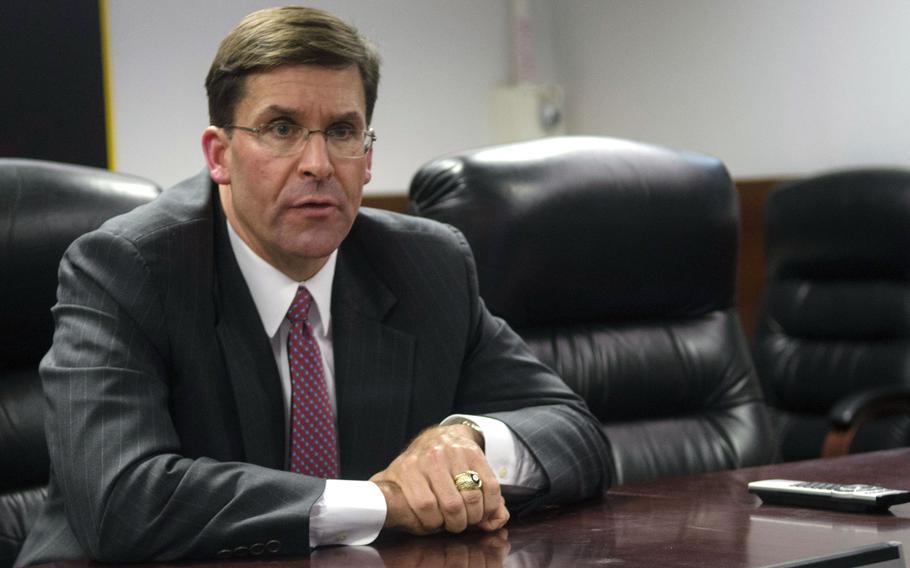 Buy Photo
Secretary of the Army Dr. Mark Esper answers a journalist's question during a meeting with the press in Wiesbaden, Germany, Monday, Jan. 29, 2018. Esper emphasized the Army needed to prepare for ''high-end'' conflict against near-peer adversaries. (Dan Stoutamire/Stars and Stripes)

Buy Photo
Secretary of the Army Dr. Mark Esper answers a journalist's question during a meeting with the press in Wiesbaden, Germany, Monday, Jan. 29, 2018. Esper emphasized the Army needed to prepare for ''high-end'' conflict against near-peer adversaries. (Dan Stoutamire/Stars and Stripes) 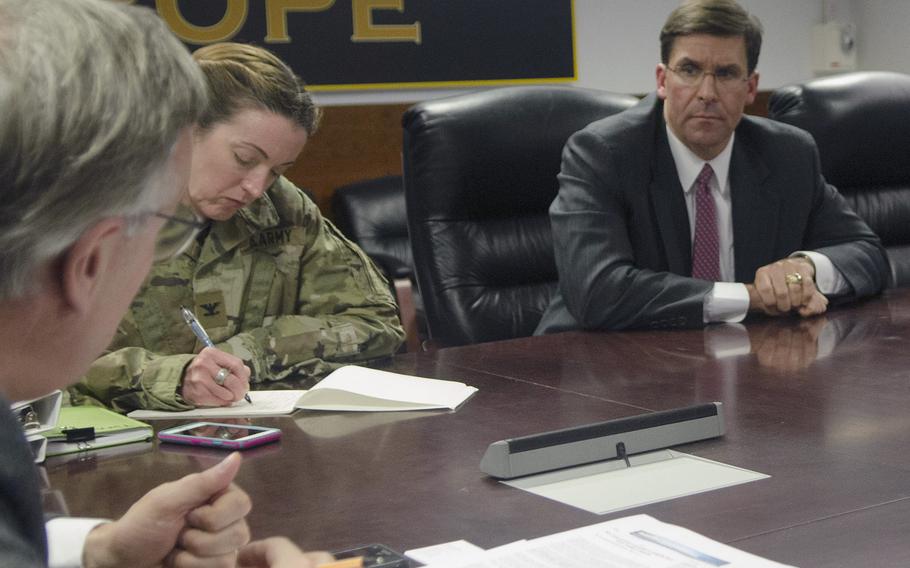 Buy Photo
Secretary of the Army Mark Esper listens to a journalist's question in Wiesbaden, Germany, Monday, Jan. 29, 2018. Esper emphasized the need of the Army to prepare for ''high-end'' conflict against near-peer adversaries. (Dan Stoutamire/Stars and Stripes)

WIESBADEN, Germany — The Army should learn how to use old-school methods against advanced adversaries in the cyberwarfare age, the Army secretary said Monday.

With technology changing the face of conflict — just this week, a popular fitness app was reported to display the location of sensitive U.S. bases worldwide — Secretary of the Army Mark Esper said he’d like to see soldier training that reflects that reality.

“I’d like to be able to see them operate in a situation where we shut down the net and they have to operate free of radios,” Esper said in an interview with Stars and Stripes on Monday. “There’s all these things in the future environment that we have to prepare for.”

The training Esper envisions would place soldiers in scenarios where they could be easily detected via their heat signatures, or easily exposed to cyberattacks, Esper said.

His emphasis on near-peer adversaries — as opposed to the more recent insurgency-focused conflicts — is in line with the 2018 National Defense Strategy released this month by Defense Secretary Jim Mattis, which makes threats posed by Russia and China a priority.

The U.S. has previously accused both Moscow and Beijing of cyberintrusions into government and private systems. The intrusions have raised concerns that GPS and other systems could be compromised in a conflict.

Esper discussed his priorities while on a visit to U.S. European Command, U.S. Army Europe and the Grafenwoehr Training Area, Germany, as well as to U.S. troops in Poland.

“I came in with my top priority being readiness, and we have things we need to do to make sure we’re prepared for a high-end fight anywhere in the world,” Esper said.

The secretary also said that he’d like to see “incremental builds” on the next generation of combat vehicles so that they can be outfitted with future technology, such as microwave weapons, without the need for extensive overhauls.

“We can’t wait forever for them to develop, but … we may want to make sure we leave room on the platforms or power in the system, so we can add those on over time,” he said.

Esper voiced support for the rotation of armored and aviation brigades in Europe, a measure adopted in response to a more aggressive Russia, and said it would remain in place in the near future.

But he isn’t ready to shut down the idea of adding more permanent units to the Continent.

“We’ve got to continue to assess the situation, permanent versus rotating forces, and it may not be a clear black or white,” he said. “I keep an open mind about that.”

Esper, a businessman who was sworn in on Nov. 20, has already had to deal with political turmoil in Washington. A short-lived government shutdown affected training for tens of thousands of National Guard and Reserve soldiers.

With another possible shutdown looming in February, Esper said, he and his fellow civilian leaders are working to mitigate further disruptions.

“Myself and certainly Secretary of Defense (Jim) Mattis will continue to message the Hill and Congress about the criticality of this funding and the urgency given the impacts it has on readiness,” he said.