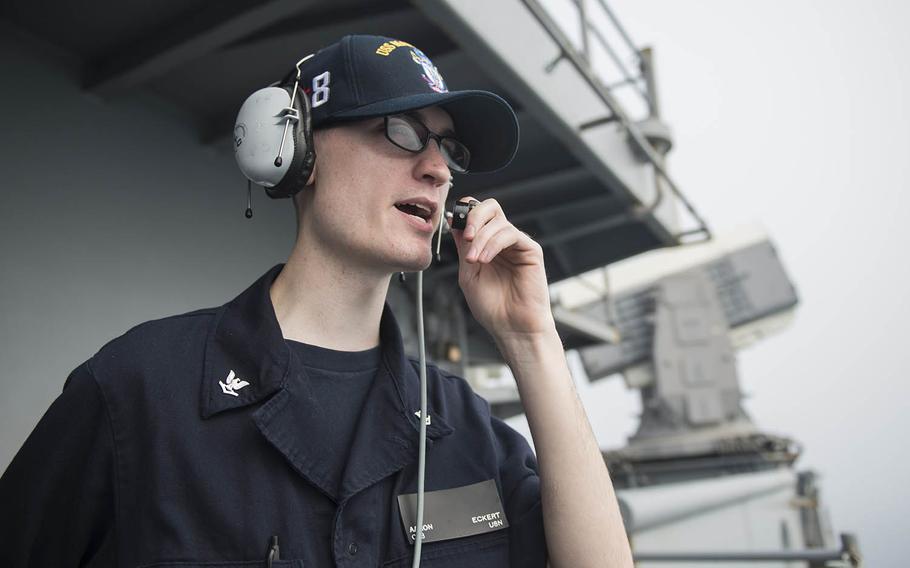 A sailor on the USS Makin relays information to bridge watch standers from the fantail as the amphibious assault ship arrives in Hong Kong for a scheduled port visit in April. (Devin Langer/U.S. Navy photo)

FORT SHAFTER, Hawaii — A couple of decades into his 30-year Navy career, John Cordle took command of the destroyer USS Oscar Austin in 2001.

Looking back, Cordle confesses that he felt a need to prove something to his superiors.

“This is the job I’ve been training for,” he recalled his mindset being at the time. “There’s six others in the squadron, and I want to be the one who finds a way to ‘yes.’

“I look back at that now and wonder, was that me being a good steward or was that me trying to make myself look good?”

In the wake of several high-profile ship disasters this year, a Navy comprehensive review released Thursday takes aim at the consequences of a widespread culture of “getting to yes,” a go-go approach that has left many of the fleet’s forward-deployed ships inadequately maintained and crews overworked, undermanned and short on training.

“Interviews revealed that particularly among ships based in Japan, crews perceived their Commanding Officer was unable to say ‘no’ regardless of unit-level consequences,” the review said. “Tight directive control can result in a command climate intolerant of dissenting views or questions that prevents effective teamwork and forceful feedback in planning, preparations, and execution.”

The review comes months after 17 sailors were killed in two collisions involving Navy destroyers in the Pacific. In June, the USS Fitzgerald ran into a commercial vessel off Japan, and in August the USS John S. McCain crashed into an oil tanker east of Singapore. Both vessels are part of 7th Fleet’s forward-deployed ships homeported at Yokosuka Naval Base, Japan.

Can-do culture The review makes clear that the never-say-no ethos has been a factor in undermining the Navy’s readiness — particularly the Japan-based fleet — where too few officers with authority in the chain of command have drawn a red line over safety and training concerns.

But the Navy also faces other entrenched mores as it attempts to institute a system of “near-misses” reporting for Pacific Fleet ships and continues to grapple with a fleet-wide problem of commanders being removed for personal misconduct.

“We have a can-do culture,” said Adm. John Richardson, chief of Naval Operations, during a Sept. 19 Senate hearing about the collisions. “That’s what we do. Nobody wants to raise his hand and say, ‘I can’t do the mission.’ But it’s absolutely essential that when those are the facts we enable that report.”

Richardson described the pervasive culture of deploying without proper training and certification in 7th Fleet as “kind of this boiling frog scenario over time,” meaning that problems of a lukewarm level slowly built up into a deadly boil before being fully perceived.

But the Navy has long been aware of this particular ethos hamstringing its surface fleet.

A scathing 2010 internal Navy report on the surface fleet’s readiness urged officials to counter the “underway at all costs” mentality.

The so-called Balisle Report noted that the Navy’s decade-long policy of seeking greater efficiency — primarily through rejiggering maintenance and manning schemes — had “served to steadily reinforce the notion that less readiness is acceptable.”

“From the most senior officers to the most junior petty officer the culture reveals itself in personal attitudes running from resignation to frustration to toleration,” the report said.

“While the severity of current culture climate may be debated, its decline cannot. If left unchecked, a declining culture can only generate a worsening level of surface force readiness.”

Even stretched as it has been, the Navy meets fewer than half the deployments requested by combatant commanders, Richardson said.

“The hard part is that the demand is not going to go away,” Cordle said. “But I’m not convinced that the Navy would be as averse to someone saying we can’t do something as we sort of assume,” he said.

“The signal is out there now that that’s an acceptable path, but it was an expectation — spoken or unspoken — that was there in the past.”

On the other hand, wars and battles have been won by people taking on an impossible situation and making the best of it, he said. “So you have to be careful not to squash that initiative and that warfighting.”

Changing attitudes One way forward would be to begin rewarding officers for prudent decisions in putting the brakes on deployments of ill-prepared surface ships, said Bryan Clark, a senior fellow with the Center for Strategic and Budgetary Assessments in Washington, D.C., and a former strategic planner for the Navy.

“Right now what happens is decisions on whether to say no to a particular deployment generally rise all the way to the level of the chief of naval operations,” Clark said.

“Because people don’t want to go and tell CNO, hey, I can’t do this, below that level the can-do attitude sort of persists,” he said.

Such decisions should perhaps be pushed down to the fleet-forces command level where an officer has enough seniority to be able to stand up and say no but is still close enough to a readiness problem to directly understand it, he said.

Today’s admirals are generally removed from the realities of ship conditions as compared to previous generations, said Capt. Michael Junge, a military professor at the U.S. Naval War College.

“Once upon a time flag officers, even fleet commanders and CNOs, spent time underway traveling from place to place,” he said. Now they spend more time, especially at the three- and four-star level, in private jets and talking to large groups from a dais, he said.

“Too many of them think the Navy is what they experienced as they moved up the ranks,” he said.

The Navy’s comprehensive review does not directly address the issue of the motivations by officers to garner promotions and protect careers through overzealous can-do actions. It instead emphasizes the need to recognize crew fatigue, recommending implementation of a management plan that “considers human factors and delineates operational restrictions to include ‘Go-No-Go’ criteria for hours on task, and task limitations.”

It also recommends the establishment of a near-miss reporting system across the surface fleet, which had already been implemented in September for the Pacific Fleet with the goal of creating a “culture of critical self-assessment.”

Some observers think the Navy faces an uphill battle in changing attitudes around the reporting of near-misses with ships and other close calls, such as groundings.

“I think every surface officer has a collection of close calls where it very easily could have been them on the Fitzgerald or the McCain getting t-boned by a big merchant ship,” said Steven Stashwick, a lieutenant commander in the Navy Reserve who spent a decade as a surface warfare officer before leaving active duty in 2015

“Everyone has those stories, but they aren’t discussed,” he said. “That can contribute to an artificial sense of what the fleet’s overall proficiency really is because you don’t know about the near-misses.”

It remains to be seen, however, “how eager captains are really going to be to self-report a bunch of near-misses,” he said. “Because it’s something their boss is going to hear, and inevitably that sort of thing is going to have an impact on their professional evaluation. That’s the piece I’m not quite sure how you’ll overcome.”

“In theory it’s a great idea, but in practice it’s probably infeasible,” said Jan van Tol, who retired as a captain from the Navy in 2007 after a career that included command of three warships.

“Basically what it means is putting yourself on report, and the definition of ‘near-miss’ is very fuzzy.”

Lt. Cmdr. Nicole Schwegman, a Pacific Fleet spokeswoman, told Stars and Stripes via email that the near-miss protocol will serve as a tool to quickly conduct a “root cause analysis” and then take corrective actions.

“This instruction no longer frames self-reporting as a negative thing, but instead makes it a tool for learning, and preventing future mishaps,” she said. “The process will instill a culture of continuous improvement, promote better understanding of the sound shipboard operating principles, and gain proficiency to improve warfighting effectiveness.”

Ethical standards The Navy has also struggled for years to curb an epidemic of misconduct by ship commanders.

In a 2012 analysis in the Naval War College Review, Capt. Mark Light described the “worrisome” number of dismissals of commanding officers over the previous decade — 42 from 2002 through 2010 — due to personal misconduct, such as sexual harassment, drunkenness and fraternization.

“The excessive (and increasing) number of COs fired for personal misconduct is symptomatic of cultural issues within the Navy and of a confusing ethical context in society, combined with a failure to set effectively and uphold an ethical standard within the service,” wrote Light, then a faculty member at the U.S. Army War College in Carlisle, Pa.

The Navy has since then taken steps to head off such misconduct, including screening of potential commanding officers by an administrative board and greater scrutiny of Command Climate Assessments, annual surveys that give subordinates a chance to weigh in on CO performance.

A 2015 follow-up analysis in the same publication tallied 27 commanding officers fired for personal misconduct from 2011 to 2013.

The “Fat Leonard” scandal, however, has eclipsed the problem of skipper misconduct in the past four years, with eight Navy officers — including a rear admiral — indicted in March, four admirals disciplined by the Navy and others still under investigation.

The officers all took part in a scheme by “Fat” Leonard Glenn Francis, a Malaysian who provided money, luxury items and prostitutes to Navy personnel in return for classified information about movement of ships and submarines in Southeast Asia, which he used to defraud the U.S. government.

“There’s no way you could have as much churn as Fat Leonard caused in the last few years in 7th Fleet and have it not impact what’s been going on. You just can’t separate it,” Junge said.

Clark isn’t convinced of that because most of those caught up in the scandal are logistics and staff personnel or very senior officers who aren’t the likely pool from which the next generation of executive and commanding officers would be drawn.

“I don’t think it had a big enough impact to have contributed significantly to readiness problems in the Pacific Fleet,” Clark said.