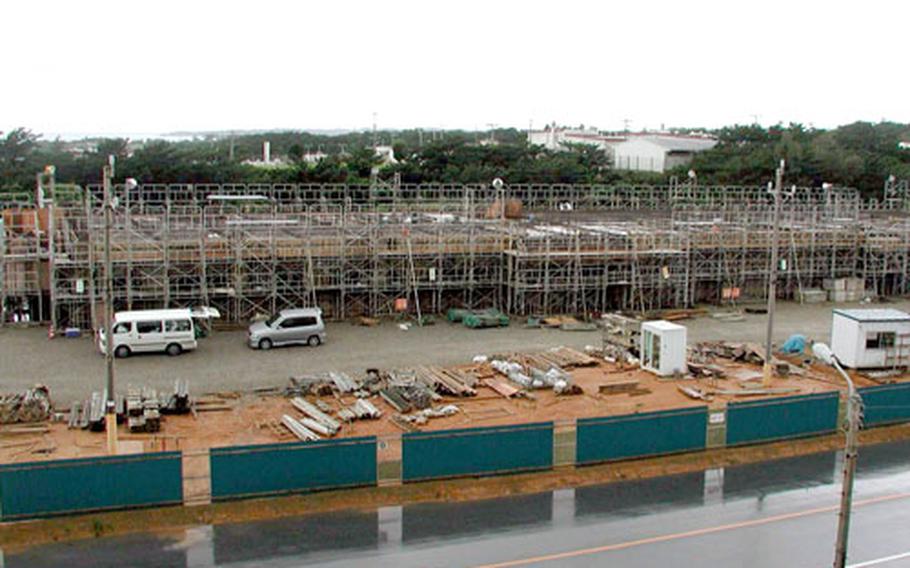 A new two-story battalion headquarters on Camp Schwab, costing some $5 million, is set for completion in November. Camp Schwab and Hansen are both seeing major renovations, similar to those at Camp Foster. (U.S. Marine Corps)

CAMP SCHWAB, Okinawa &#8212; Finishing touches are being put on $15.4 million in new construction here that includes a new shopping mall, headquarters for the 4th Marine Infantry Regiment and other buildings.

Of course, no one knows how long they will last: The area is slated to be razed someday for construction of a new airport.

The projects were approved and funded before the United States and Japan agreed in October on a broad plan to realign U.S. troops in Japan, including closing Marine Corps Air Station Futenma in urban central Okinawa once a new air facility is built on Camp Schwab and reclaimed land in Oura Bay.

&#8220;But it will be a while before we have to worry about going into the construction phase on that,&#8221; said Bill Kinzley, Facilities Planning director for Marine Corps Bases Japan. &#8220;Until then, the troops on Schwab will have a great new mini-mall and other buildings.&#8221;

Camp Schwab has seen more construction in the past 18 months than in the last eight years, said Navy Cmdr. Mike Williamson, the public works officer for Marine Corps bases in Japan.

The projects on Schwab are part of an ongoing face lift of the Marine Corps&#8217; major bases in northern Okinawa. An additional $37.5 million is being spent on several projects for Camp Hansen, including a $5.6 million gym, $8.8 million AAFES mini-mall and $2.5 million for a truck company headquarters building and maintenance shop.

All of the construction, except the AAFES projects, is financed by Japan.

The Camp Hansen projects include a $1.9 million complex for the Provost Marshal&#8217;s Military Police Investigation Division, Naval Criminal Investigative Service, Japanese security guards and a Pass and ID Office. Construction on Camp Hansen will not be affected by the troop realignment.

The 39,100-square-foot mall consolidates under one roof all of the various Exchange services scattered throughout the camp. It will include a restaurant area for Burger King, Subway, Baskin-Robbins, Taco Bell, Pizza Hut and Popeyes.

It also will feature an expanded retail store area, car rentals, dry cleaning and alterations and an ATM.

A larger, 63,332-square-foot mini-mall now is under construction on Camp Hansen behind the existing Exchange area. It is scheduled to be completed in early December.

Other projects on Camp Hansen are pending, Kinzley said.