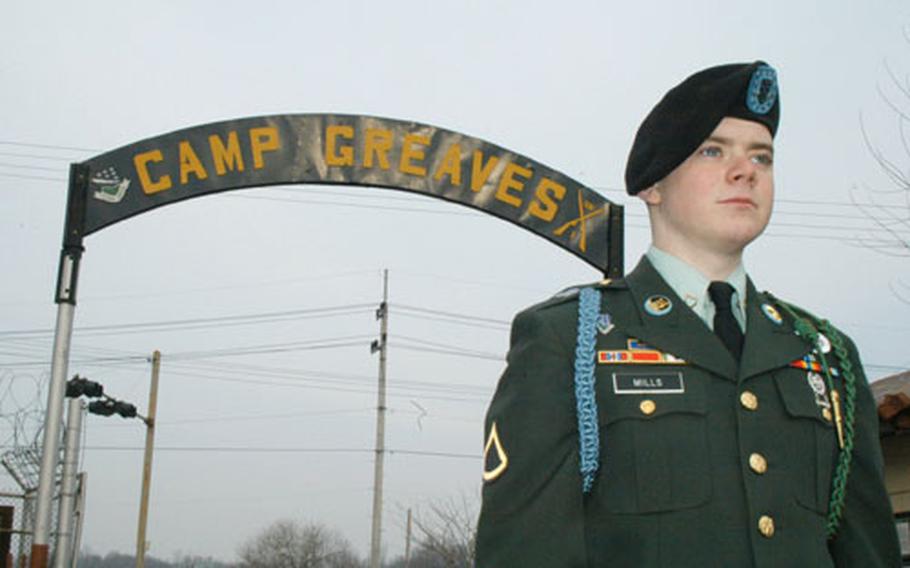 Brig. Gen. John A. Macdonald, director of the Installation Management Agency-Korea Region, made the surprise announcement at a town hall meeting with Camp Casey soldiers earlier this week. Official word, however, was not spread until a Thursday afternoon news release.

A spokesman for IMA-KORO said Thursday the closures were part of a revision to the Land Partnership Plan that South Korea and the United States signed in March 2002.

Under the original plan, Greaves and Giant were to close in 2011, said the spokesman, Steve Oertwig.

Officials could not immediately explain why the time line was moved up, or why the bases named were the ones to be closed or downsized. More details would be available Friday, Oertwig said.

Greaves and Giant are home to the 1st Battalion, 506th Infantry Regiment, a major part of the 2nd Infantry Division.

It was unclear Thursday where those soldiers would move, but military officials previously have said smaller bases in the 2nd ID area would be consolidated onto hubs at Camp Casey and Camp Red Cloud.

A 2nd Infantry Division spokeswoman said Thursday it was not &#8220;in her purview&#8221; to discuss the announcement at this time.

Greaves, at 58 acres, and Giant, at 24 acres, offer fewer services than other area bases; soldiers stationed at the two bases routinely travel to the larger facilities in the area.

Camp Giant also houses a Directorate of Public Works office, which likely will be shifted to Rodriguez Range and other bases in the Western Corridor area, officials said.

Macdonald also announced that the number of U.S. soldiers at Camps Bonifas and Liberty Bell &#8212; which sit on the Demilitarized Zone&#8217;s southern boundary and house soldiers who serve in the Joint Security Battalion &#8212; will be reduced from 200 to 43.

Soldiers at Bonifas are known as the most forward-deployed unit on the peninsula and the entire U.S. Army. They are on 24-hour alert with their South Korean counterparts.

As part of the base closures, officials will do extensive environmental cleanups, Macdonald said. Among the fixes will be removing underground fuel storage tanks.

U.S. military officials in South Korea repeatedly have said they will reconfigure troops on the peninsula but will keep a high deterrent level by using improved military technology.

Officials have touted some $11 billion in new and upgraded military hardware that has been, or is to be, deployed in South Korea in the coming years.

This week, the sixth round of the Future of the Alliance Talks is being held in Hawaii. U.S. and South Korean officials are discussing troop relocations, but the talks this week are expected to focus on the future of Yongsan Garrison in Seoul, officials said.