Camps Casey, Hovey spruced up for influx of troops 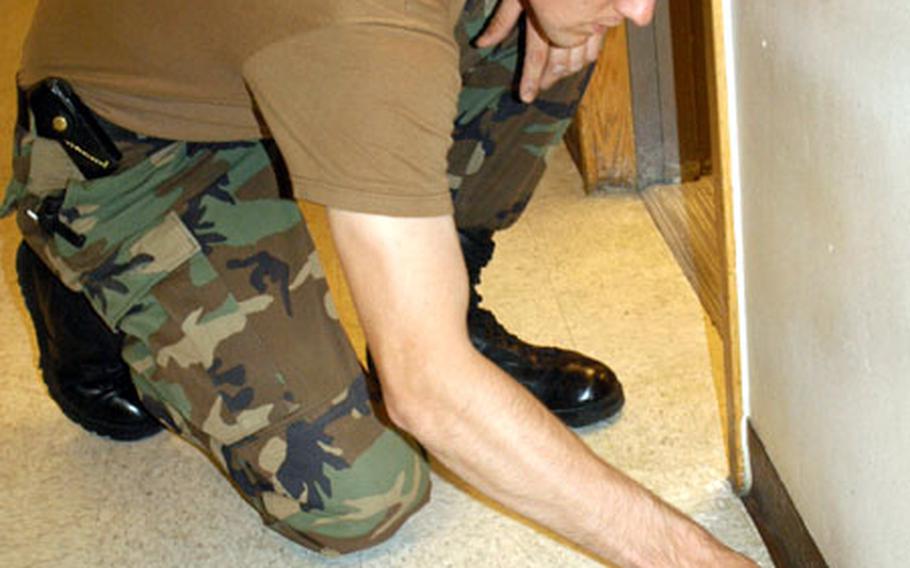 Pfc. Caldwell Dean, 20, of Detroit did not mind getting down on his hands and knees to scrape the floors of 4-7’s new headquarters building at Camp Hovey last week. (Seth Robson / S&S)

Pfc. Caldwell Dean, 20, of Detroit did not mind getting down on his hands and knees to scrape the floors of 4-7’s new headquarters building at Camp Hovey last week. (Seth Robson / S&S) 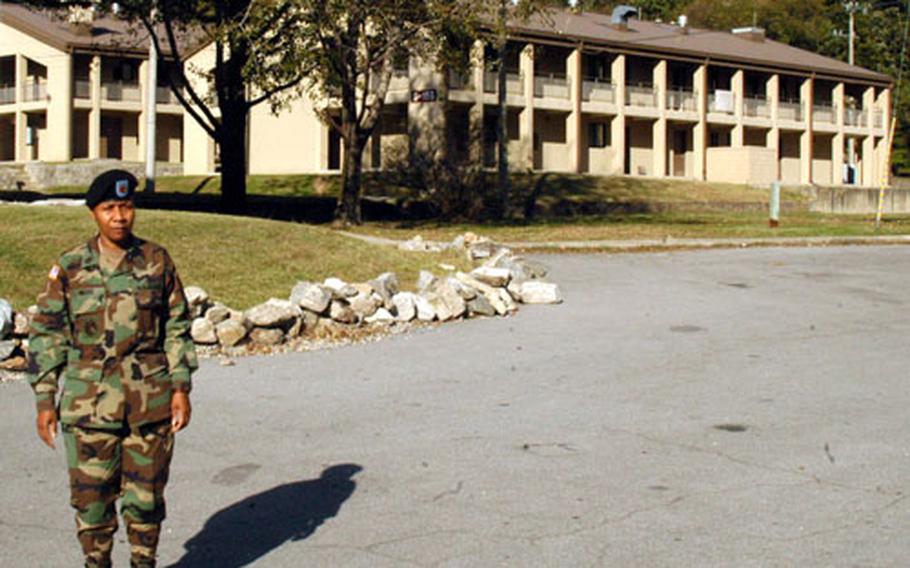 The soldiers, from various 2nd Infantry Division units, are taking over offices, barracks, storage areas, motor pools and other facilities left vacant by units from the division&#8217;s 2nd Brigade Combat Team (Strike Force), which deployed to Iraq in August.

Camp Casey Garrison Sgt. Maj. Eva Webb of Fitzpatrick, Ala., gave media members a tour of camps Casey and Hovey last week and pointed out where changes are happening at the bases.

On that day, parts of the bases looked like ghost towns with soldiers, who had the day off, apparently outnumbered by South Korean maintenance workers. Camp Casey buildings, which once housed the 1st Battalion, 503rd Infantry Regiment before it deployed to Iraq, were quiet and empty.

The buildings will become the 2nd ID Engineers Brigade headquarters. The brigade is moving from Camp Howze, which was shared with the 44th Engineers Battalion before that unit also deployed to Iraq. Camp Howze will close once the brigade leaves, Webb said.

Some of the barracks, which used to be home to 1-503 soldiers, will be occupied by airmen from a U.S. Air Force liaison unit at Camp Casey, who will move out of buildings at Camp Hovey, she said.

Units moving to Camp Hovey include elements of the Engineers Brigade; the 82nd Engineers Company, which is moving from another base slated for closure &#8212; Camp Edwards &#8212; and 4th Squadron, 7th Cavalry Regiment, moving from camps Stanton and Garry Owens, also slated to close.

Near the Hovey Cut, which links camps Casey and Hovey, a motor pool that was run by another unit serving in Iraq, the 2nd Forward Support Battalion, is being used to store furniture.

At Camp Hovey, 1st Brigade&#8217;s senior leaders already have moved into a new headquarters building. The 1st Brigade Headquarters recently moved from buildings on Camp Casey that will be occupied by the Engineers Brigade, Webb said.

Camp Casey will remain the home of 2nd Battalion, 9th Infantry Regiment and elements of 1-72 and 2-72, Webb said.

An advance party of soldiers from the 4-7 are preparing their new headquarters, which used to be headquarters for 1st Battalion, 9th Infantry Regiment, now serving in Iraq with Strike Force.

Pfc. Caldwell Dean, 20, of Detroit, said he did not mind getting down on his hands and knees to scrape the floors of 4-7&#8217;s new headquarters building at Camp Hovey on Tuesday.

Another soldier cleaning the headquarters, Pfc. Wade Cotton, 20, of Blountstown, Fla., also said he was impressed by the new building, which has a lot more space than the old headquarters.

But the prospect of moving back to &#8220;civilization&#8221; is more exciting than getting a new building, he said.