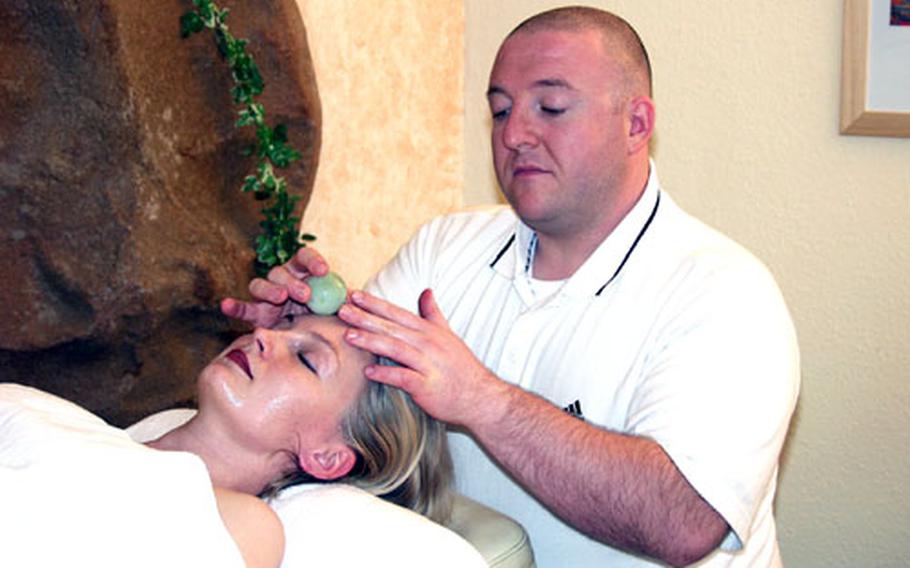 Ricky Welch, a massage therapist who works at Campbell Barracks, likes to use semi-precious stones such as jade, malachite and rose quartz in his massages. (Courtesy of Ricky Welch)

Young Ricky Welch wasn&#8217;t planning to massage anyone the night years ago he went to Eppelheim, Germany, to see the Scorpions, only to find it sold out. So the aspiring massage therapist improvised his way into the concert. He walked back to his car, got his portable massage table from the trunk and headed for the concert hall back door. Someone had called for a masseur, he told security, and he was it.

Before long, Welch says, he was massaging ACDC&#8217;s drummer, Billy Idol and even Bono of U2.

Welch, a cheerful and chubby German-American massage therapist with an earring and a dedicated if noncelebrity local clientele at Campbell Barracks, may not be through with famous bodies yet.

Maybe some day he&#8217;ll cart his portable massage table to the Ed Sullivan Theater in New York City, whip out his hot jade and cold crystal and put David Letterman out of his misery.

Letterman is a reported sufferer of tinnitus, or ringing in the ears. Welch claims to have devised a special massage that makes the incessant, annoying sounds stop.

He calls it the &#8220;Aurum Manus,&#8221; Latin for golden hands. Welch says the massage treats only stress-induced tinnitus, as well as headache and migraine, not tinnitus due to organic damage of some sort.

Medical science isn&#8217;t certain of the ailment&#8217;s causes, and has yet to find a cure. But Welch says his surprising results have captured the imagination of not only German otolaryngologists, but also Letterman&#8217;s regular masseur.

For now, though, Welch can be found most days kneading and prodding the stiff, sore muscles of soldiers and civilians in a former shower room in the gym at Campbell Barracks.

There, with his oils and hot rocks, music and theories about the importance of the kidneys, he aims to fight barehanded the ravages to the body caused by stress, sports injuries, over use and &#8230; sitting.

Welch, 36, and the son of a U.S. Army father and German mother, studied for two years at Heidelberg University, starting when he was 18, and apprenticed for another year before getting his diploma, he says.

But his interest in massage therapy began when he was 13, when he laid eyes on the massage room at a local swimming pool. To Welch, it was magic.

Welch can name &#8212; and does &#8212; 14 different types of massage, including the Turkish Maham massage, which involves a marble table, possibly heated, and a lot of soap.

He&#8217;d welcome the chance to massage Gen. B. B. Bell, commander of U.S. Army Europe, he said, whom he assumes is under a great deal of stress.