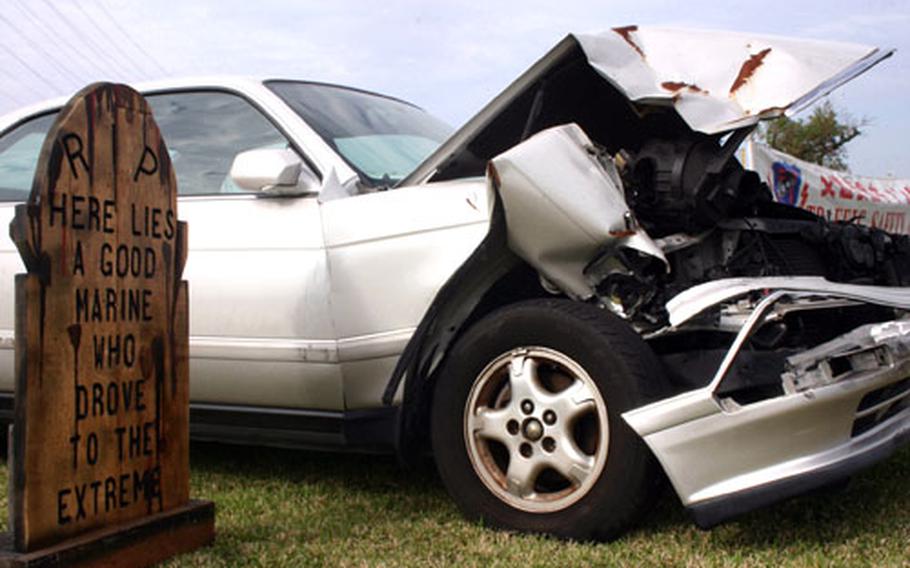 This wrecked car and fake tombstone on Camp Foster are one of many static displays parked at a gate on most of the military bases on Okinawa to remind people during the holiday season of the dangers of driving while impaired. (Cindy Fisher / S&S)

This wrecked car and fake tombstone on Camp Foster are one of many static displays parked at a gate on most of the military bases on Okinawa to remind people during the holiday season of the dangers of driving while impaired. (Cindy Fisher / S&S) 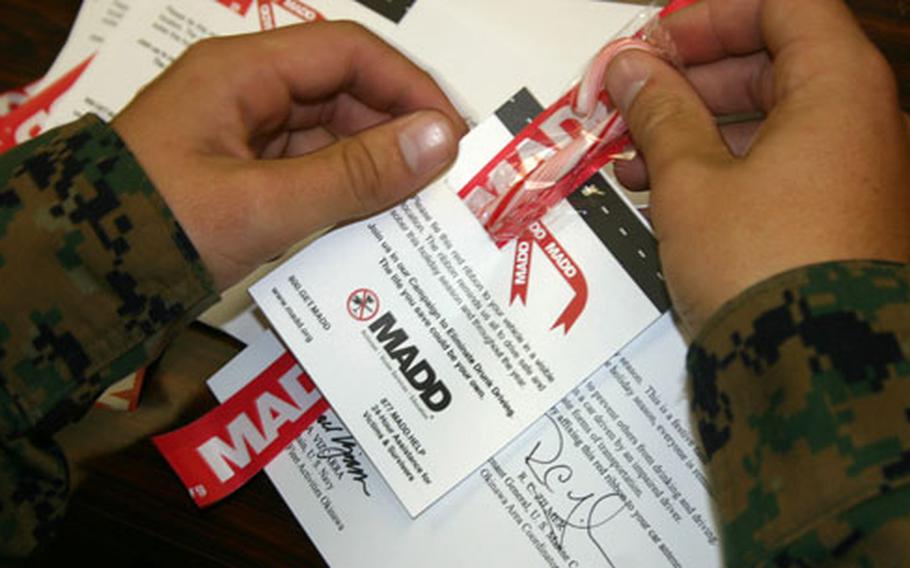 Cpl. Aaron Harris, 22, from Amite, La., puts together a packet Wednesday at the Marine Corps Air Station Futenma Provost Marshal&#39;s Office that urges people to not drive while impaired and includes numbers to the DAIKO service from each base. "Military police have been handing these out to people at some of the Marine gates," said 2nt Lt. Steve Carlos, with PMO. ()

That&#8217;s the message military leaders and law enforcement are trying to get across to the community this holiday season, said 2nd Lt. Steve Carlos, one of the coordinators of this year&#8217;s Drinking and Drugged Driving Campaign on Okinawa.

The 3D campaign, supported by the senior leaders from all four service branches on Okinawa, is mostly about educating the military community about the negative effects of impaired driving and alternative methods for getting home if you&#8217;ve been drinking, he said.

As part of the program, children in the Drug Abuse Resistance Education program have made posters that will be hung at commissaries, and wrecked vehicles are parked at gates on most bases.

Military police also are working to educate people about the effects of driving while under the influence of prescription drugs or while sleepy, he said.

People also should bear in mind the strict Japanese laws governing driving under the influence, Carlos said. It doesn&#8217;t take much to hit .03, the Japanese intoxication limit, he said.

Under new Japanese laws, a passenger in the car of an intoxicated driver is just as culpable as the driver, he added.

A DUI offense will affect a servicemember&#8217;s military career, even if a ticket is issued off base. The military police communicate with the Japanese police and will do so especially over the New Year&#8217;s weekend, he said.

The 3D campaign will include command-authorized vehicle inspections, a 100 percent identification card check and highly visible and aggressive patrols by the provost marshal&#8217;s office throughout the holiday season, according to a Marine Corps news release.

Military police have been holding additional checkpoints at random bases on Okinawa and joint service checkpoints on the weekends, Carlos said.

Getting you and your car home safely

Daiko is a taxi service that offers a way to get you and your vehicle home if you&#8217;ve been drinking. The service provides a cab for you and a second driver who drives your car home. The service is available for on- and off-base residents.