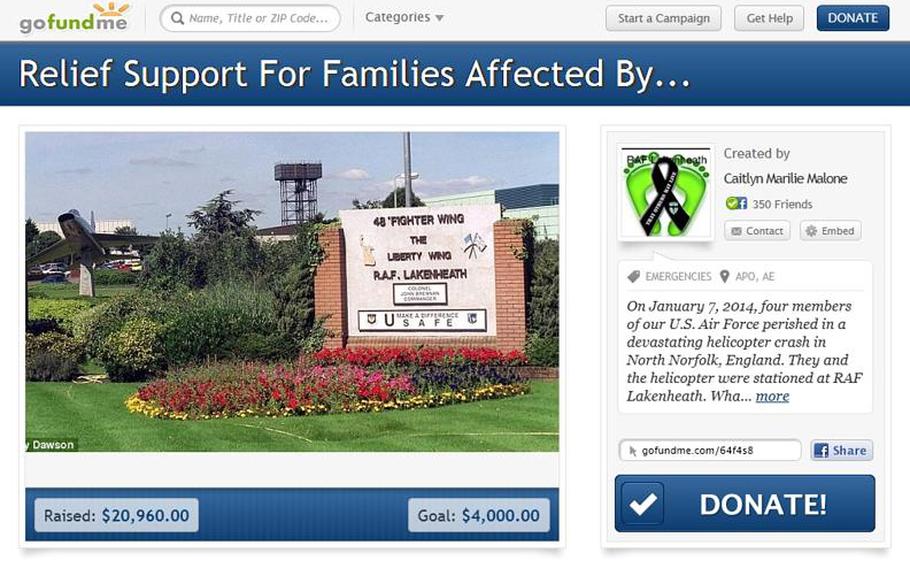 To help the families of the four airmen killed in Tuesday's helicopter crash, the wife of an electrical mechanic at RAF Mildenhall, England, set up a gofundme.com page. As of Friday, the campaign had raised more than $22,000. (Courtesy of gofundme.com)

RAF MILDENHALL, England — Less than a week has passed since the crash that killed four airmen near the town of Salthouse, but a drive to help the families of the victims has already raised more than $22,000 as of Friday.

Caitlyn Malone, the wife of an electrical mechanic who works at RAF Mildenhall, started a fundraising campaign Wednesday on gofundme.com “to cover any monetary loss” the families might suffer, she wrote on the website.

Malone said in a phone interview that she started the campaign in order to tell the families of the victims “that although this is a very difficult and very tragic time for them, we are going to come together as a military community and support them and help them out with whatever it is that they need.”

She plans to stop the campaign on Monday and has asked RAF Lakenheath’s public affairs office to help her distribute the funds.

Anyone interested in donating to the families through Malone’s campaign can contribute at www.gofundme.com/64f4s8.

There is also an effort to help at Lakenheath. Brandy Lockhart, president of Lakenheath Liberty Kids, said they will sell raffle tickets for donated prizes at the Lakenheath Child Development Centers, to raise money for the Ponce family.

Lockhart said the raffle was prompted by her daughter, who was in the same class as one of Ponce’s children.

The Air Force, however, is warning people not to misplace their generosity. A notice has appeared on some Air Force Facebook pages warning that the Lakenheath’s legal office “is investigating several sites claiming to be collecting contributions.”

A Lakenheath spokesman said in a phone interview that the Air Force does not conduct fundraising campaigns, and any person or group claiming to raise funds officially should be treated cautiously.

The spokesman advised people to research any purported charity before donating money.