Army Specialist Jaime Moore has "blood" painted on her face by Hospital Corpsman Vicheath Phan. Both were taking part in a training exercise at Camp Zama, Japan. (Christopher B. Stoltz / S&S)

Army Specialist Jaime Moore has "blood" painted on her face by Hospital Corpsman Vicheath Phan. Both were taking part in a training exercise at Camp Zama, Japan. (Christopher B. Stoltz / S&S) Army Specialist Arielle Mcallister puts an oxygen mask on ninth-grader Cambell Overly, who volenteered to play a victim in a training exercise at Camp Zama, Japan. (Christopher B. Stoltz / S&S) Japanese firemen communicate by using hand signals as they wash down volenteers. (Christopher B. Stoltz / S&S) 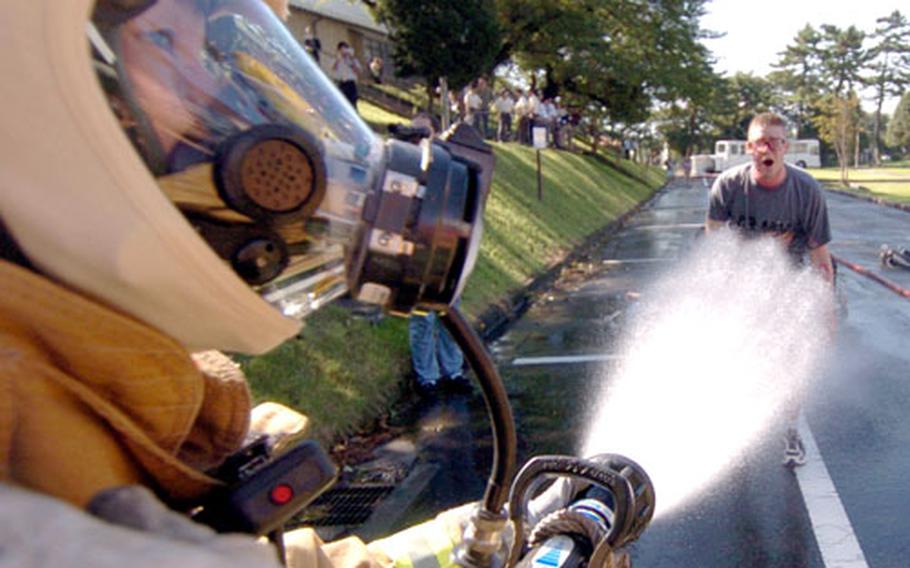 A volunteer gets washed down during the exercise at Camp Zama. (Christopher B. Stoltz / S&S) 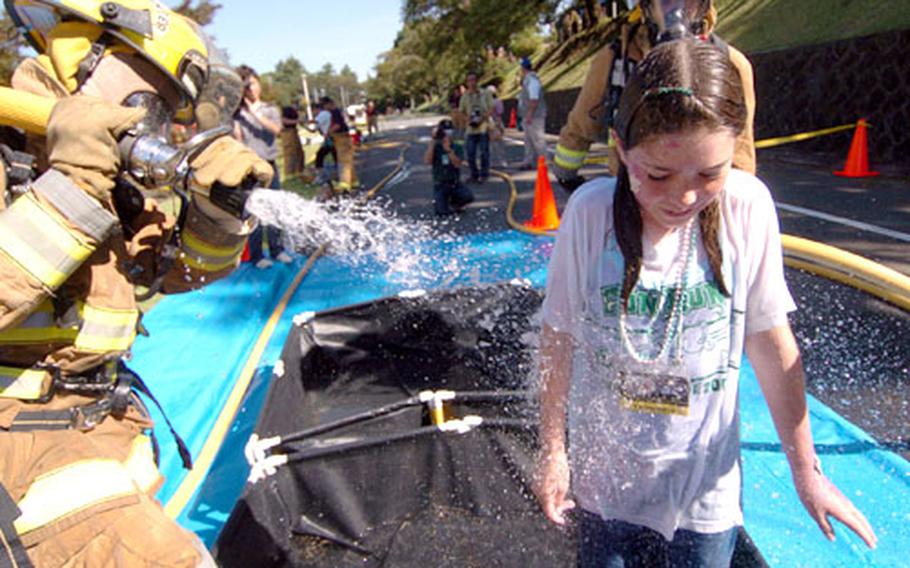 Japanese firemen wash down Laura Bailes, a seventh-grader who was “contaminated” during the exercise. (Christopher B. Stoltz / S&S)

A truck driver hauling chemicals and an explosive device rammed through Gate No. 2 here, crashing into a passenger bus near the U.S. Army Garrison Japan headquarters building.

Base police, fire and ambulance crews who responded found 27 injured and three dead, including the suspected terrorist. A toxic plume of anhydrous ammonia had also spread from a barrel in the back of the pickup.

The rehearsal, a review of Zama&#8217;s ability to tackle a major attack or incident, was part of U.S. Army Pacific&#8217;s Chemical, Biological, Radiological, Nuclear and (high-yield) Explosives exercise, or CBRNE. It involves elements of the Army, Air Force and Navy and is held alternately at Zama, Yokosuka Naval Base and Yokota Air Base.

Defense Department guidelines state that U.S. military installations must stage the exercise at least once a year.

&#8220;This was nine months in the works, with all the planning needed to get it coordinated and run properly,&#8221; Bender said.

Soldiers and Zama American High School students played Thursday&#8217;s victims. They were on a bus headed to an off-post golf tournament in Nichibei when it was hit by a fictional terrorist named Shamus O&#8217;no. Military police were in pursuit at the time.

Exercise planners had two victims take off on foot for the base clinic immediately after the incident.

While Zama military police secured the perimeter, firefighters and medical personnel tended to victims, who marched through decontamination lines. The Center for Health Promotion and Preventive Medicine-Pacific was responsible for identifying the chemical agent, and a hazardous-material team later worked to contain the ammonia spill.

&#8220;There are a lot of moving parts,&#8221; said Lt. Col. Ron Stephens, commander of Zama&#8217;s Medical Activity-Japan and the U.S. Army Japan surgeon. &#8220;The object is to get all those moving parts working together as closely as possible.

While Thursday&#8217;s session was centered on the leak of an industrial chemical, the methods used by emergency responders can easily be employed during natural disasters and other terrorist attacks, Stephens added.