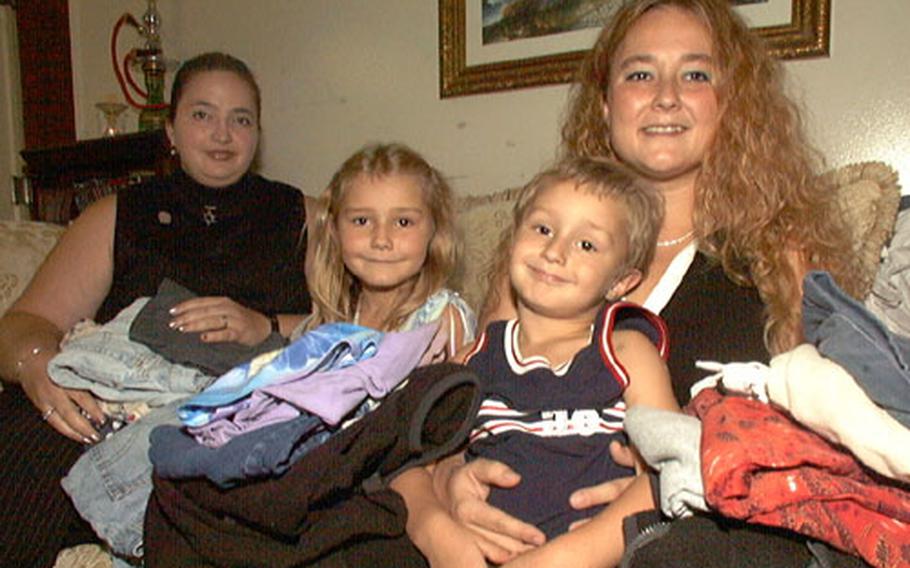 The Family Readiness Group of the 78th Signal Battalion at Camp Zama, Japan, is heading a clothes drive to send civilian clothes to servicemembers serving in Afghanistan and Iraq on a four-day rest and relaxation tour to Camp As Sayliyah, Qatar. FRG leaders Jennifer Moreno (left) and Dominique Unrein, and her children, Cassandra and Brandon, have already gathered several boxes of clothes towards the effort. (Jennifer H. Svan / S&S)

There&#8217;s no clothes shortage at this small Army post near Tokyo, but a handful of spouses and soldiers want to make rest and relaxation time more comfortable for the thousands of troops traveling through Camp As Sayliyah, Qatar, from Iraq and Afghanistan.

Unrein&#8217;s husband, Army Sgt. Lee Unrein, a computer technician with the battalion, has been at Camp As Sayliyah since February.

He forwarded his wife an e-mail from Army Capt. Eric Clark, a camp public affairs officer, seeking civilian clothes for servicemembers on a four-day visit.

The two mentioned it at a group meeting last month, and donations have piled up.

The program provides four days&#8217; rest to troops serving in Iraq and Afghanistan who have been deployed for at least 90 days.

About 120 servicemembers, from all military branches and some coalition forces, arrive daily, he said. The camp has many amenities including a full-service post exchange, a movie theater, all-ranks club, Olympic-size swimming pool and tennis and basketball courts.

The problem is, he said, many of the troops arrive at camp with only desert camouflage uniforms.

Spc. Andrew D. Lauer, 27, from Santa Rosa, Calif., arrived at Camp As Sayliyah last week with two pieces of civilian clothing: A pair of jeans and a button-down shirt.

Lauer, with the 74th Dive Unit, has been deployed for five months; he and his unit are stationed at Camp Iron Horse in Tikrit, Iraq.

After five months in desert camouflage fatigues, he said, &#8220;It feels unbelievable to have time away from Iraq.&#8221;

Clark said with the daily influx of servicemembers, the camp&#8217;s post exchange can&#8217;t keep up with the demand for civilian clothes.

Most in demand, he said, are slacks for men and women, including blue jeans and khakis: &#8220;To respect local customs, military members must be in long pants before they&#8217;re allowed off-post.&#8221;

Moreno encouraged people to include notes with their donation: &#8220;Let the soldiers know we appreciate them,&#8221; she said.

Unrein said helping with the clothes drive makes her feel closer to her husband, who&#8217;s scheduled to be deployed for a year.

Montgomery, the 78th Signal Battalion commander, said the clothes drive is a great opportunity for anyone to help servicemembers deployed to Iraq and Afghanistan.

Clothes donations can be sent directly to Camp As Sayliyah at: USCENTCOM, CCJ6, APO AE 09365, Attn: As Sayliyah Clothing Drive.

Clark noted that the camp already has received clothes donations from the States and notes from people in Washington, D.C.; Alexandria, Va.; Dallas and several California cities that are conducting &#8220;R&R&#8221; clothing drives.

Unrein and Moreno said Camp Zama donations may be dropped off at the 78th Signal Battalion&#8217;s headquarters, Building 123, at Camp Zama.

The boxes take about five to six days to arrive at Camp As Sayliyah by mail, Unrein said, noting postage costs nothing because the clothing parcels may be shipped via the Military Postal System.