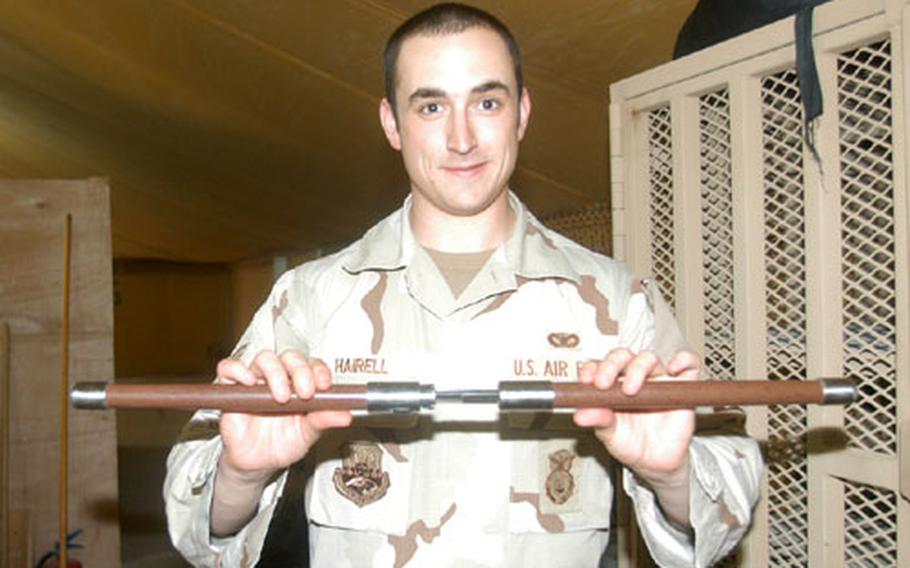 Senior Airman Andrew Hairell, a customs border clearing agent at the amnesty point on Camp Wolverine, displays a baton that separates into two swords. Swords are considered contraband. All servicemembers leaving from a deployment through Camp Wolverine are completely inspected for illegal items prior to departure. (Jessica Inigo / S&S)

Senior Airman Andrew Hairell, a customs border clearing agent at the amnesty point on Camp Wolverine, displays a baton that separates into two swords. Swords are considered contraband. All servicemembers leaving from a deployment through Camp Wolverine are completely inspected for illegal items prior to departure. (Jessica Inigo / S&S) 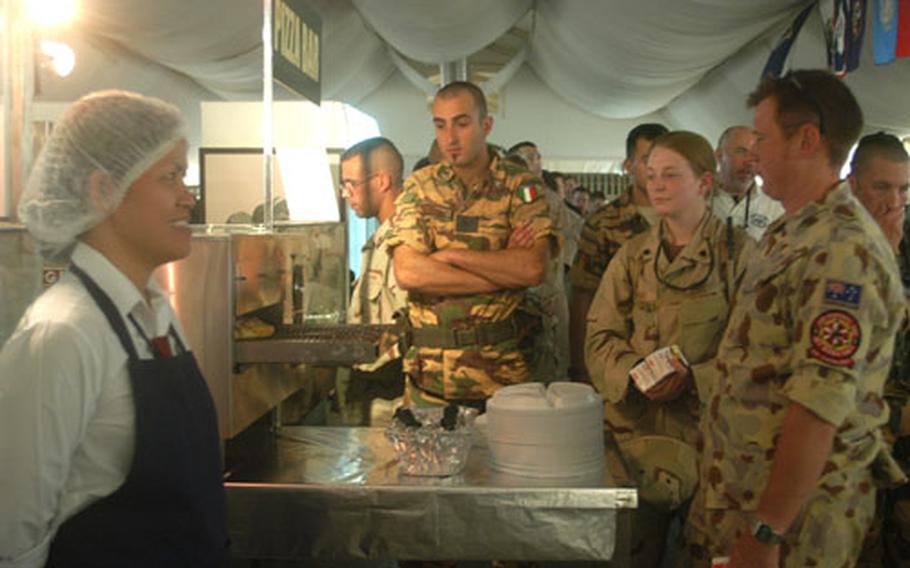 CAMP WOLVERINE, Kuwait &#8212; When immigrants first stepped on to Ellis Island and waited in long registry lines to be scrutinized for disease on their way to becoming citizens, they hoped to live the American dream.

Two centuries later, similar weary travelers overburdened with heavy bags and difficult journeys, are stepping on to a port in Kuwait to defend that same dream.

Also known as the Arial Port of Debarkation and Embarkation, or simply APOD, Camp Wolverine provides transient services for U.S. and coalition forces.

Entering the sandy country is much like immigrants entering the new world: arrivals are steered into in-processing lines and quickly dispersed throughout the area of operation.

This means in less than a week, a servicemember is registered and sent to his assigned deployment with country, finance, and hazardous briefings, as well as force-protection gear and ammunition. Unit liaison officers are also present to assist specific unit issues.

For troops who need to stay the night prior to heading out, 49 rows of air-conditioned tents are lined with empty cots.

So far, about 130,000 troops have deployed through Camp Wolverine this year, keeping the population ever changing. There are only 800 servicemembers assigned to APOD, including units from all four services.

For troops leaving the theater a clockwork system is in place to get units home as quickly as possible.

&#8220;You have to have patience,&#8221; said Sgt. Brandon Sollars, of the 282nd Quartermaster Component from Montgomery, Ala., who is going through the return cycle after a deployment to Camp Anaconda in Balad, Iraq. &#8220;It&#8217;s a simple process, really. They seem to know their job well since they push so many people through.&#8221;

Returning home after a deployment includes a series of briefings and a major baggage inspection to keep illegal items from getting out of the country.

The baggage dump takes place only after servicemembers are briefed about what is contraband. They are then allowed to go into covered amnesty points to leave any souvenirs they may have tried to smuggle without being caught. After their last chance to ditch these items, a shakedown takes place in another holding area.

The most unique item confiscated by a troop was a 4-foot Saddam Hussein head statue, according to Senior Airman Andrew Hairell, a customs boarder-clearing agent at the amnesty point.

So far 81,000 troops have returned through the camp after their mission was complete. Another 15,000 have moved through under the U.S. military&#8217;s Rest and Recuperation Program.

The camp also has an Expeditionary Medical Facility, or a scaled down hospital, open 24 hours a day.

Though troops are still a long way from home in Kuwait, the tall control towers of the APOD could almost be mistaken as the Statue of Liberty coming into Ellis Island; just the sight of them look like beckoning arms welcoming troops home after a long deployment.