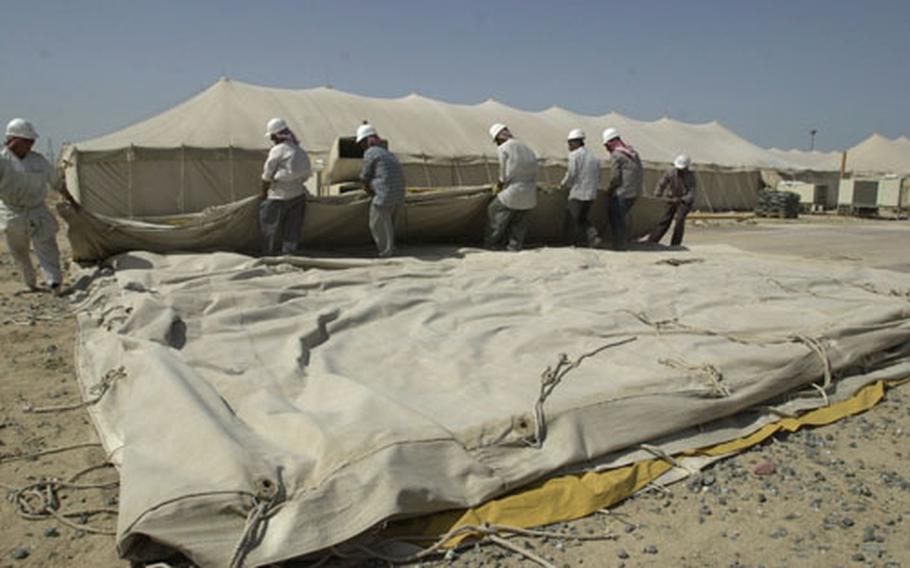 Local Kuwaiti workers fold up a 60-person tent at Camp Wolverine on Tuesday. The camp, which was the Aerial Port of Debarkation, is set to close in several weeks. All APOD operations have moved to Camp Doha, Kuwait. (Fred Zimmerman / S&S)

Local Kuwaiti workers fold up a 60-person tent at Camp Wolverine on Tuesday. The camp, which was the Aerial Port of Debarkation, is set to close in several weeks. All APOD operations have moved to Camp Doha, Kuwait. (Fred Zimmerman / S&S) 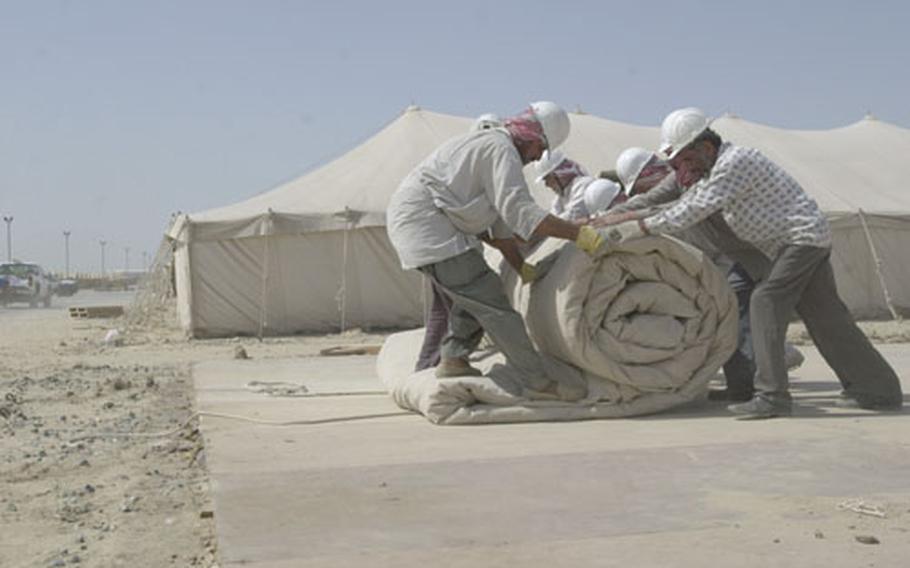 Local Kuwaiti workers roll up a tent. Camp Wolverine, which was the Aerial Port of Debarkation, is set to close in several weeks. All APOD operations have already moved to Camp Doha, Kuwait. (Fred Zimmerman / S&S) CAMP WOLVERINE, Kuwait &#8212; The once-busy camp looks like a ghost town as the tents that stood in perfect alignment slowly come down. While still home to some support personnel, Camp Wolverine will officially close in several weeks.

The camp&#8217;s main purpose was to act as the Aerial Port of Debarkation, or APOD, for troops heading to or coming from Iraq. The APOD operations, along with its more than 600 personnel, have moved to Camp Doha. Other tenant units on Camp Wolverine are moving to various camps throughout Kuwait.

The land where Wolverine once stood, which is near the Kuwait City International Airport, will be turned back over to the Kuwaiti government. According to Army Capt. Tom Wargo, Security Force commander at Camp Wolverine, the area will be turned into a free-trade zone and new airport terminal.

Wargo said having the APOD near the airport was convenient, and the move to Camp Doha has added some &#8220;speed bumps.&#8221; He added that in addition to the Kuwait City airport being used for departures, Ali Al Salem Air Base will see an increase in traffic. Camp Doha is about halfway between the two airports.

With longer transit times between the camps, Wargo said the chances for problems increase. For example, if a bus broke down on Camp Wolverine, troops could carry their bags to the flight line and not show up late. But now, if a bus breaks down, a replacement vehicle will have to be found, and the chance of troops missing a flight increases.

Army Lt. Col. John Donovan, commander of the 847th Personnel Services Battalion who is currently coordinating all APOD functions, agreed that transportation is now the No. 1 concern. He said transportation coordination has been problematic, but not to the point where it has compromised the overall mission.

In addition to the new commute, Donovan said the APOD also must get used to working out of smaller facilities. He said everything from billeting to parking to briefing rooms are smaller than what they had on Camp Wolverine.

Another challenge APOD personnel faced just after the move was an increase in business. Donovan said the Rest and Recuperation program is back into high gear and there was a small surge of units moving through for what he called &#8220;OIF two-and-a-half.&#8221;

Donovan said that Camp Doha personnel, not just those with the APOD, have been a great help since the recent move.