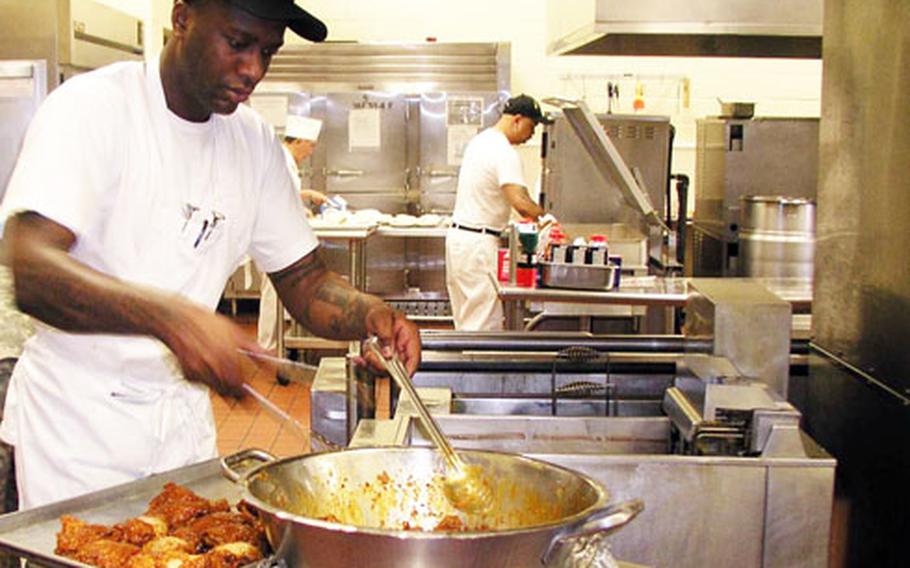 At the Camp Walker dining facility in Daegu, South Korea, on Thursday, Pfc. Jerol Johnston does his part in preparing the "Victory Meal" that marks the end of the annual exercise Key Resolve/Foal Eagle. Johnston, 25, of San Antonio is a cook assigned to the 188th Military Police Company. (Franklin Fisher/S&S)

DAEGU, South Korea &#8212; It was the home stretch of the big exercise in South Korea, and at the Camp Walker dining hall Thursday, a small army of cooks was in high gear preparing the end-of-exercise "Victory Meal."

In just hours the troops would be in the chow line at the tail end of the annual Key Resolve/Foal Eagle exercise, which began March 9 and was to officially end Friday.

It draws thousands of additional U.S. troops to South Korea.

And at Walker, hundreds of them would be looking forward to Thursday&#8217;s special dinner.

The Victory Meal at the end of last year&#8217;s Key Resolve drew the biggest head count for a single meal here: 863 people.

"The line was continuous," she recalled.

Every few minutes she&#8217;d send someone out to see if the line was easing up.

Exercise planners know how many troops will need to be fed during the exercise.

So they keep the food rolling by the truckload, every three days, Harper said.

"You would be amazed at how much food is coming in on these trucks now, from one or two pallets [when there&#8217;s no exercise] to about five pallets. It may be more," Harper said.

"They usually give out one case of chicken for one meal; here they&#8217;re giving four cases of chicken. I saw we got some more food. Stacked all the way up to the ceiling.

"The milk is just going fast. Just seems like everything is going so fast. Milk. Juice. Soda. You name it. Salad bar. The people are consuming so much food."

"When the exercise comes, you have to stay focused," said one of the cooks, Pfc. Jerol Johnston, 25, of San Antonio, assigned to the 188th Military Police Company.

But the troops seem to look forward to the meals.

"They always say thanks," Johnston said.

"Especially during things like Key Resolve, they&#8217;ll appreciate a good meal. So that makes us in the back want to put out a good meal."