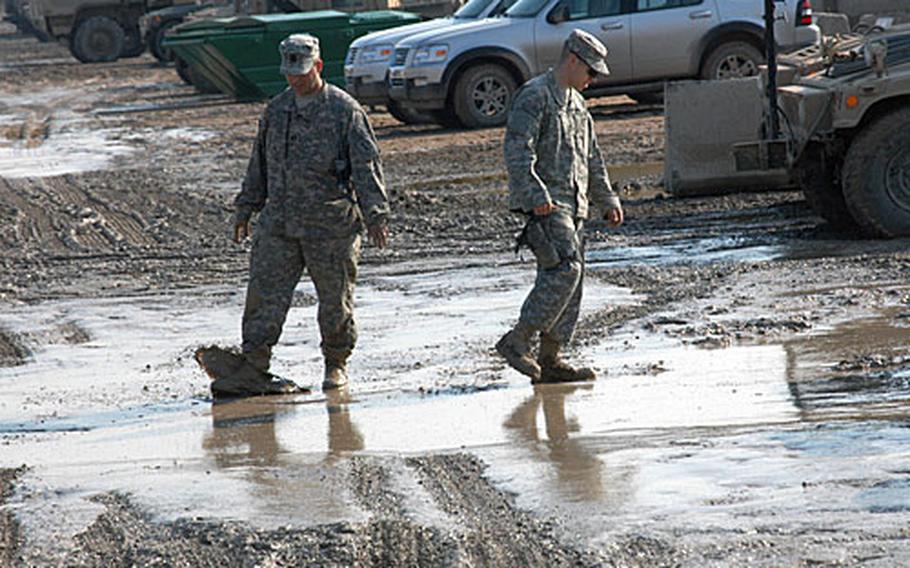 Soldiers from the 95th Military Police Battalion prepare a convoy next to a large mud puddle at Forward Operating Base Rustamiyah in Iraq. (Vince Little / S&S) CAMP VICTORY, Iraq &#8212; A longtime nemesis resurfaced this week on battlefields and U.S. bases in Iraq.

Descriptions are as copious as the muck itself. Some call it chocolate pudding, peanut butter and flour all rolled into one, only far nastier. It weighs down boots and coats them up like caramel on an apple, and it doesn&#8217;t come off easily.

People use sticks, brushes and metal grates and slam their boots onto concrete walls to knock the clumps away. Nothing seems to help.

The mud gets dragged into offices, chow halls, living quarters, latrines, the exchange &#8230; everywhere. And it&#8217;s even more difficult to spot at night as pedestrians search for the path of least resistance. There usually isn&#8217;t one.

In lower-lying areas at nearby Camp Liberty and other parts of Iraq, getting around is even tougher.

Early Friday afternoon, Spc. Justin Doubet, 20, of Glasford, Ill., worked on his mud-layered boots in the driver&#8217;s seat of a Humvee parked on a sloppy lot at Liberty.

Doubet, who is assigned to the 101st Airborne Division&#8217;s 1st Squadron, 75th Cavalry Regiment, says he learned how to live with claylike mud while growing up in the country.

Sgt. James Singleton of Headquarters and Headquarters Company, 18th Military Police Brigade, who is on his third tour in Iraq, said the mud here is unlike any found in the United States and the lack of grass here doesn&#8217;t help.

&#8220;Unfortunately, there&#8217;s not enough rock put down to make a difference,&#8221; said Singleton, 31, of Dallas, who was in a support unit during the initial drive into Baghdad in 2003, then returned a year later for a deployment in western Iraq. &#8220;They need more rocks or concrete walkways, especially in areas around living quarters and latrines. That would solve a lot.

After it rains, Singleton said he often wears wet-weather rubber boots over his desert boots, tennis shoes and flip flops. He seeks out the rockiest passageway or higher ground when walking.

Dust storms were prevalent west of Baghdad and they&#8217;re much worse, he added.