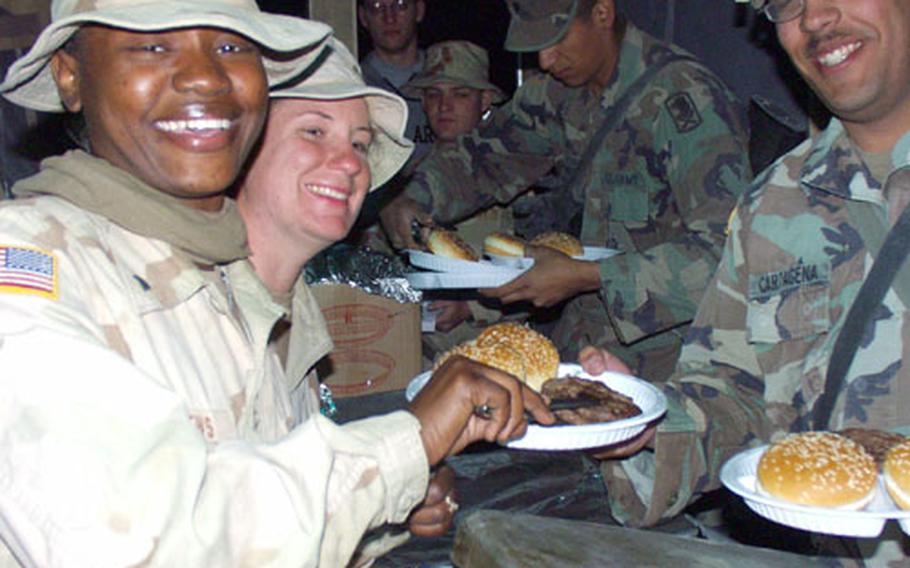 Spc. Latrelle Matthews (left), a cook from the 1st Battalion, 3rd Aviation Regiment, serves a hamburger to Spc. Jorge Cartegena, a 17th Signal Battalion soldier from Kitzingen, Germany, for the Monday evening meal at Camp Udairi, Kuwait. It took dining facility soldiers less than 36 hours to gear up and serve a hot meal after the DFAC burned to the ground early Sunday. (Steve Liewer / S&S)

Col. Pete Bosse, the camp mayor, said the fire is believed to have been started by a halogen lamp placed too close to the tent wall in the northernmost tent by a contract worker.

The lamps are known to burn very hot, and the tent&#8217;s walls are flammable.

Two of them rushed back with pans of water to try to douse the flames, but it was too late. Two chaplains and several worshippers from a just-completed Protestant service fled, as did about 60 Army cooks and food-service contractors.

No one was hurt.

Spc. Laticia Wilson, 22, a cook for the Giebelstadt, Germany-based 5th Battalion, 158th Aviation Regiment, said she saw the fire erupt from behind the tent.

Bosse has ordered several new safety measures, including the addition of extra fire extinguishers in the tents. Other measures include keeping at least two entrances, and some units are adding round-the-clock fire patrols.

Regulations barring smoking within 50 feet of tents are being rigidly enforced.

Safety officers also are stepping up tent inspections to make sure electrical outlets aren&#8217;t overloaded. Some soldiers are taking extra steps on their own.

&#8220;We have a lot of soldiers sleeping with their knives so if a fire does erupt, they&#8217;ve got their own way out,&#8221; said Chief Warrant Officer 5 Will Chance, safety officer for the Illesheim-based 11th Aviation Regiment.

Given the inherent dangers of the desert tent cities, Bosse said it is imperative that fires never start.

The ashes had not even cooled Sunday before Army engineers rolled in with bulldozers and dump trucks, hauling away the rubble. They worked through the night, and by Monday morning, only rocks and desert sand lay at the site of the blaze.

The local contractor brought in two new trailer-kitchens and put up temporary tents. Bosse said a new permanent chow hall &#8212; a metal clamshell-shaped building similar to the helicopter hangars now at the base &#8212; should be up in about three weeks. It already is en route from Bahrain.

Base officials are hoping the fire&#8217;s other silver lining will be waking soldiers up to the intense fire danger in these desert camps.

The tents most soldiers live in are leased from Kuwaiti contractors. They are treated with a water-repellant chemical that is highly flammable.

Sgt. Brady Brever, chief of the 336th Engineer Detach- ment/Firefighters, a Wisconsin-based reserve unit serving at Camp Udairi, said tests have shown fire can consume one of the tents in just 21 seconds.