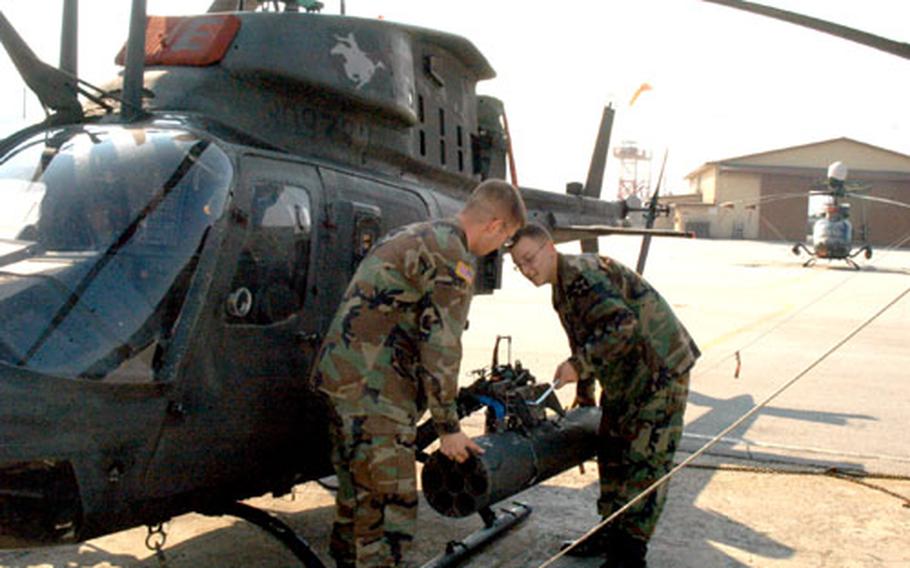 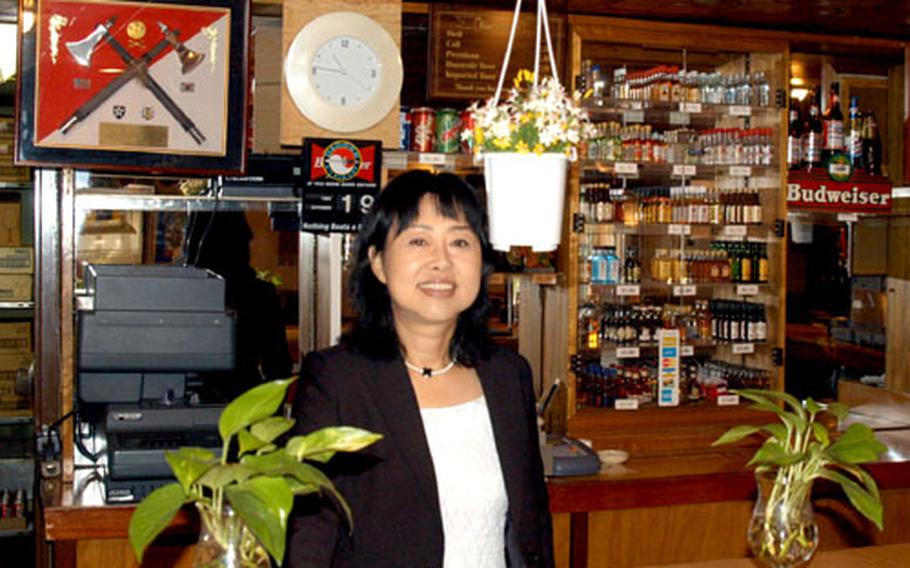 South Korean Tae Myong Hui, who has managed the Fiddlers Green restaurant and bar at Camp Stanton, South Korea, for the past four years, said she will miss working at the small installation. (Seth Robson / S&S) 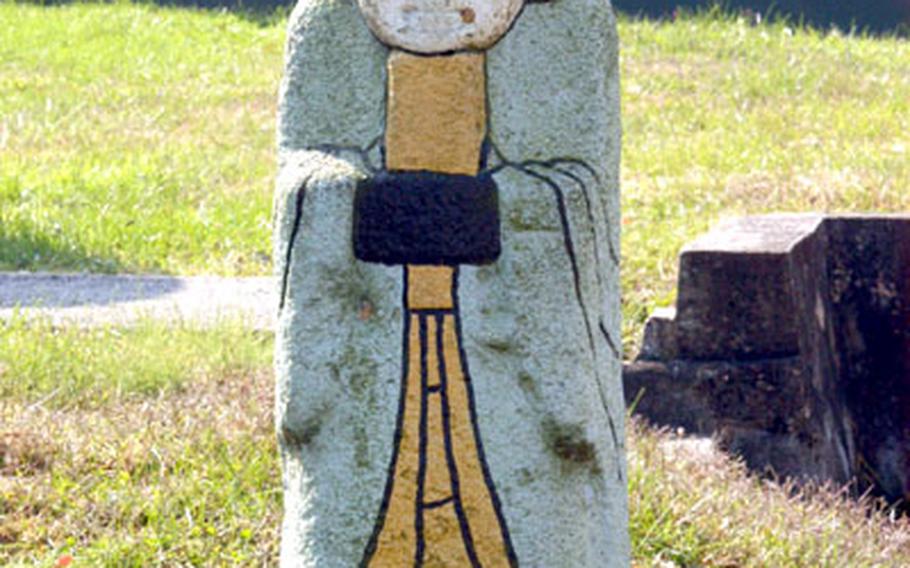 This Korean rock carving will remain at Camp Stanton when U.S. forces leave the base later this year. (Seth Robson / S&S)

Editor&#8217;s Note: This is the third in an occasional series on U.S. bases in South Korea closing this year.

CAMP STANTON, South Korea &#8212; Kiowa Warrior helicopters based in Area I, South Korea, will make their last flight over the peninsula next month with the closure of Camp Stanton and their reassignment to a stateside facility.

Camp Stanton, near Munsan, is one of six Western Corridor camps occupied by the 2nd Infantry Division slated to close by the year&#8217;s end. Also closing are camps Howze, Edwards, Greaves, Garry Owen and Giant.

Three other bases in the 2nd Infantry Division area, camps Bonifas, Liberty Bell and Falling Water, also are slated to be closed.

The camp closure marks the end of the line in South Korea for 16 Kiowas based there with 4th Squadron, 7th Cavalry Regiment. The Kiowas, which are leaving as 4-7 transforms into an armored reconnaissance squadron, will make a final flight to Osan Air Base next month before being shipped back to the United States, a 2nd ID official said.

The Kiowas are among about 360 operated by the U.S. military worldwide, said 4-7&#8217;s Camp Stanton airfield commander Capt. Adam Kiown, 27, of Kentucky.

The reassignment of Germany-based Kiowas to the United States at the same time as the South Korea move means that by next year, there will be only six installations in the world where Kiowas are based, he said.

However, the machines remain an effective weapon and have been used extensively in Iraq and Afghanistan, he said.

&#8220;I was in Iraq with the 3rd Armored Cavalry Regiment. It (the Kiowa) is really a great aircraft for that environment. It is highly maneuverable and you can take off the doors and look straight down the street (in an urban environment). It also requires a lot less maintenance than some of the other airframes,&#8221; Kiown said.

The aircraft&#8217;s electronic sensors, including a video camera and thermal imager mounted above the rotor, give it the ability to acquire numerous targets quickly on the battlefield.

In South Korea, the Kiowas were involved in 4-7&#8217;s training cycle, which included shooting gunnery at ranges, participating in 2nd ID air assault training, and calling in fire from artillery and Air Force F-16s jet fighters, he said.

Camp Stanton is one of the smallest U.S. bases in South Korea, with approximately 160 personnel living in a collection of old Quonset huts and a few modern structures. It is about an hour&#8217;s drive from larger U.S. facilities such as Camp Casey and Camp Red Cloud.

Second Infantry Division records state that Camp Stanton was established in March 1952, during the Korean War, and named in honor of 1st Lt. John B. Stanton of the 15th Aviation Company, 24th Infantry Division; he was killed in action after crashing his aircraft for the third time during the war &#8212; the last time in a midair collision between his Ryan Avian observation airplane and a P-51 Mustang fighter. The camp once was home to the 2/61st Air Defense Artillery Battalion, the records state.

&#8220;The remoteness of it has an upside and a downside,&#8221; said Kiown, who spent 18 months at the base during two postings to South Korea.

&#8220;Being isolated makes it a closer-knit unit. You are familiar with everyone on post. We come together for more group functions as a unit than the majority of camps. We have barbecues and always have football and softball teams to participate in 2nd ID tournaments. The downside is there are less facilities than you would find at Camp Stanley or Camp Casey,&#8221; he said.

The base lacks such luxuries as a bowling alley or movie theater. However, Kiown said he will always remember his time there.

&#8220;South Korea at Christmas is always a depressing, miserable time because everyone is away from their families. One Christmas we had a big bonfire and there was a lot of snow and it was picturesque, even though we were all away from our families. You suffer through those things and it brings you closer together,&#8221; he said.

The smallness of Camp Stanton means living there is sometimes like being at high school, Kiown said.

South Korean Tae Myong Hui, who has managed the Fiddlers Green restaurant and bar at Camp Stanton for the past four years, said she will miss working there.

Most South Korean employees at the restaurant have been transferred to part-time jobs at Camp Casey, she said.

Tae, who is headed for an office job at Camp Casey, will miss talking to the soldiers most of all, she said.

&#8220;They talk about their jobs, girlfriends, wives. They want me to call their girlfriends because they (the girlfriends) don&#8217;t speak English well or they don&#8217;t know how to check their cell phone bill and ask me to call KT (Korea Telecom) for them,&#8221; she said.

&#8220;I beg them to take me for a flight in their helicopters, but after four years they never gave me a chance to ride once,&#8221; she laughed.

Another 4-7 soldier serving at Camp Stanton, Kiowa technician Spc. Brett Pierce, 25, of Longview, Texas, said he enjoyed working at a small camp where he got to know everybody.

Pfc. Richard Elder, 20, of Orlando, Fla., also a Kiowa technician, said that although there was a relaxed atmosphere at Camp Stanton, there were still high standards for maintaining the aircraft.

Some of the 4-7 soldiers who work with the Kiowas, including Pierce and Elder, will follow the machines to the 160th Special Operations Unit at Fort Campbell, Ky. Other soldiers may go to other units in South Korea or the United States, the soldiers said.