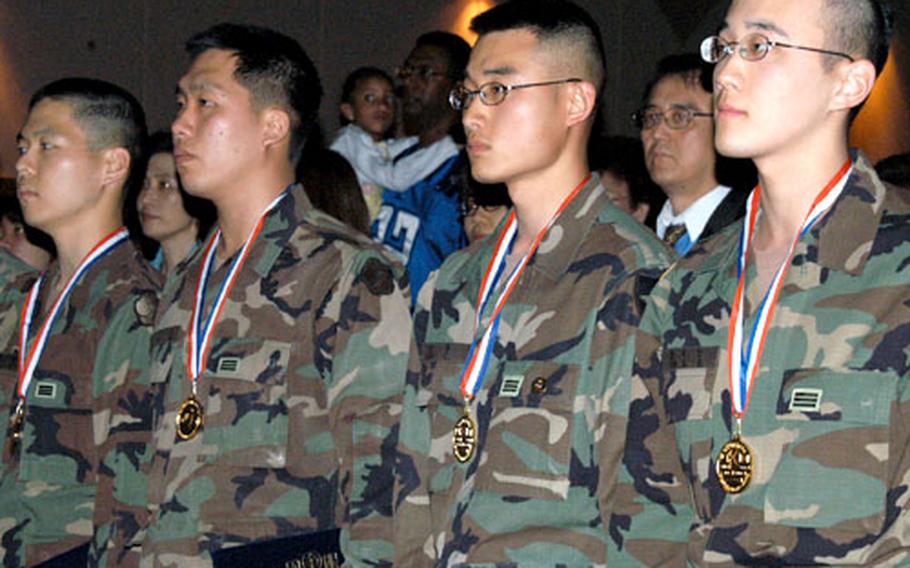 YONGSAN GARRISON, South Korea &#8212; Sgt. 1st Class Steven R. Jenderseck is the newest member of one of the most select clubs in the U.S. Army: The Sgt. Audie Murphy Club.

The honor, named after the most decorated soldier in American history, recognizes leadership and performance among noncommissioned officers. Jenderseck, of the 6th Battalion, 37th Field Artillery at Camp Stanley, said he was humbled by the award.

&#8220;I feel honored just to be among them,&#8221; he said after the ceremony Friday, referring to the many NCOs serving in South Korea and with the 2nd Infantry Division who already have earned the honor.

Jenderseck said he spent about three months preparing for the tests and paperwork required to be considered for the recognition. Welch and 8th Army commander Lt. Gen. Charles C. Campbell presented him the award.

Williams-Turner volunteers at the South Post Chapel with parents&#8217; groups and works with the director of community activities for Area II. She retired last September after 21 years in the Army.

Friday&#8217;s ceremony at the multipurpose theater on South Post also recognized 12 Korean soldiers who earned the Gen. Paik Sun-yup Leadership Award. The award is named after the first South Korean officer to become a four-star general.

Paik was born in 1920 near Pyongyang but came south before the conflict began in 1950. He participated in all 10 major campaigns in the war and served twice as the South Korean army&#8217;s chief of staff after the war.

Cpl. Kim Chang-ik, 21, was one of the recipients of the Paik award, which judges a servicemember&#8217;s military knowledge, conduct, attitude and English-language skills.