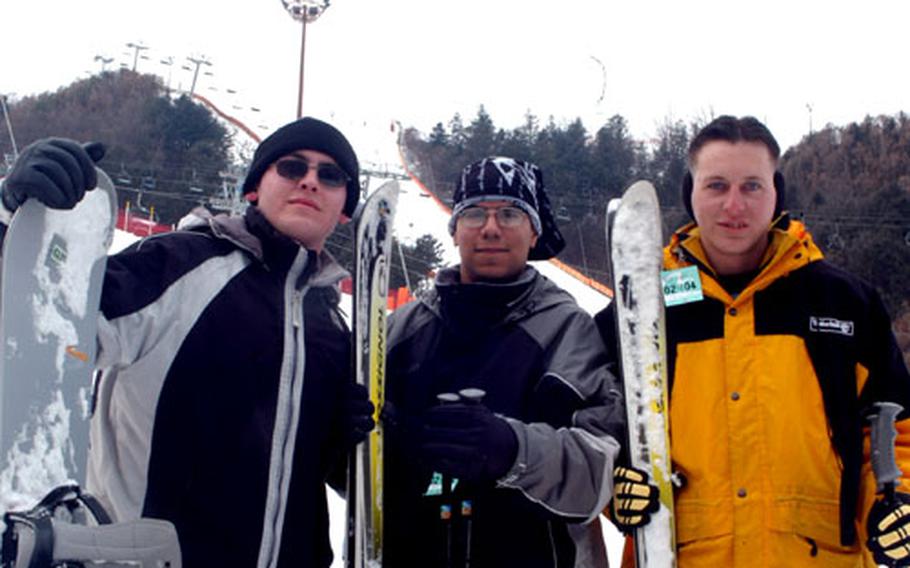 The soldiers were part of a United Service Organizations tour that included bus transport from the soldiers&#8217; home at Camp Stanley to Gangchon, a picturesque South Korean ski resort a two hours&#8217; drive away.

Along with the transportion, the 348 soldiers got lift tickets and ski or snowboard rentals for about $50 per soldier.

Sporting a yellow ski suit, 6-37 commander Lt. Col. Matt Dawson was one of the most visible skiers on the mountain, as he slid along beside his wife, Allie, and their young children, Ellen and Zach.

&#8220;We have skied in Europe and the States and at Yongpyong (ski area in South Korea), and now we are here at Gangchon,&#8221; Dawson said as he and his family assembled their ski equipment at the bottom of the slope.

&#8220;One of my obligations is to help the guys get out and see part of the culture they are in so they can have some lifelong experiences. It is a cultural education,&#8221; he said of the ski excursion.

It also rewarded the dedication of the 6-37 soldiers who won an 8th Army award for maintenance excellence and completed several training exercises recently, he said.

The USO and the Military Service Organization facilitated the tour, and the USO canteen truck was at the resort to keep the soldiers fed. Gangchon Resort rolled out a large welcome sign for the troops, Dawson said. &#8220;I have done unit trips in the States and Europe, and this is by far on par with that or better,&#8221; he said.

While some soldiers pulled off carving turns on the steeper slopes, others got the hang of their equipment in the learners areas.

Camp Casey USO director Sally Hall said more 2nd ID battalions should take advantage of the tours available from her organization. &#8220;This is a great battalion program taking the soldiers to new adventures after a hard day&#8217;s work, and the USO is proud to be involved,&#8221; she said.

USO was working on another ski trip for a different 2nd ID battalion, she said. &#8220;I hope that there will be more of these tours for other battalion-strength units that we can support,&#8221; she said.