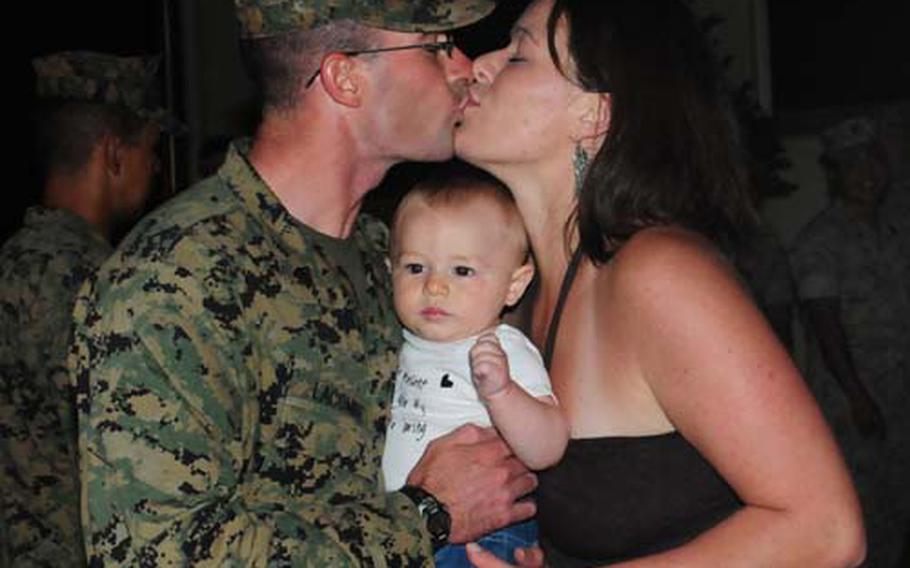 Sgt. Thomas Lacombe, a Marine from Currie, N.C., kisses his wife, Martha, after returning Wednesday to Camp Schwab, Okinawa, after a nine-month deployment in Afghanistan. Lacombe, 27, holds his son, Aaron, who was only 9 days old when the sergeant deployed. (Matt Orr / S&S)

CAMP SCHWAB, Okinawa &#8212; Kids watched movies and did their best to pass the time, while anxious mothers and wives sat around tables talking among themselves.

It was a long wait Wednesday morning at Camp Schwab&#8217;s Beachhead Club as family and friends gathered for the return of 150 Marines from a nine-month deployment to Afghanistan.

At 5:15 a.m. &#8212; three hours after they were due to arrive &#8212; the troops who had served downrange with Regional Corps Advisory Command-Central were welcomed home.

Those who returned were greeted one by one with hugs and smiles &#8212; along with cold sodas and hot pizza.

Sgt. Thomas Lacombe said he "met a lot of good people and made some great friends" during his deployment, and on Wednesday he got to hold his son, Aaron. The last time he held the boy, Aaron was 9 days old.

"I&#8217;m looking forward to spending some time with my family," Lacombe said, beaming at his son.