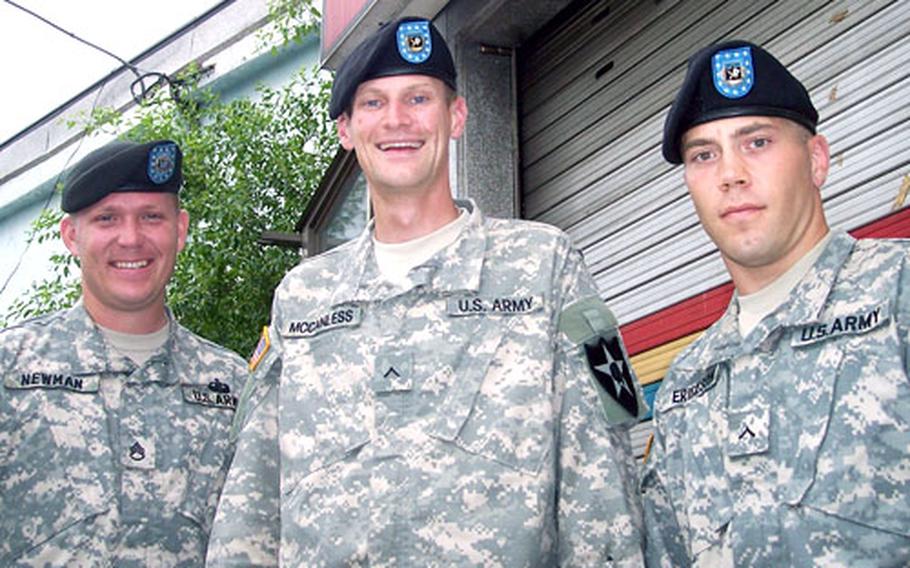 Staff Sgt. David Newman began shouting to the apartment above New York Subs, where black smoke was escaping through the roof and anywhere else it could find an opening. He correctly assumed that its occupants were sleeping. (Erik Slavin / S&S)

The two went exploring across from Camp Red Cloud&#8217;s main gate on July 1, looking for a little relaxation.

Erickson, 25, and McCanless, 26, were reviewing the finer points of handstand push-ups at about 11:30 p.m. when they noticed smoke rising from the two-story New York Subs building.

Meanwhile, Staff Sgt. David Newman had walked outside a club to use his cell phone when he smelled the smoke.

Newman, the 2ID Band&#8217;s noncommissioned officer in charge, asked for a fire extinguisher at the Veterans of Foreign Wars building next door. He came back to New York Subs and felt the hot door with his hand. He went back to the VFW and asked them how to say &#8220;fire&#8221; in Korean.

Newman began shouting to the apartment above New York Subs, where black smoke was escaping through the roof and anywhere else it could find an opening. He correctly assumed that its occupants were sleeping.

Then an elderly lady, Jung-Jin sun, opened the gate to the left of the sub shop. She had walked down a set of outside stairs from the second-floor apartment.

While Newman took care of Jung, McCanless and Erickson raced up the stairs and into the burning building.

Using their skills from basic and advanced individual training, the pair whisked Park down the stairs, just as the fire department and military police arrived.

Twenty-five firemen contained the blaze in 15 minutes, said Uijeongbu fire station investigator Kim Young-cheon. No one was in the first-floor restaurant, which sustained damage to its ceiling and appliances. The fire&#8217;s cause is under investigation.

McCanless and Erickson, whose grandfather was once a fire chief, both have suffered serious burns from past accidents. But neither hesitated to enter the burning building, they said.

They attribute that courage to their role models &#8212; McCanless cited his grandfather, who survived World War II by floating in the ocean for days after his ship was blown up.

Erickson and McCanless were examined for smoke inhalation at the medical clinic on post afterward. Both were medically cleared, but they said they&#8217;ve dealt with persistent coughing and black phlegm for the past few days.

Neither Jung nor her daughter suffered serious injuries from the fire. For that, the soldiers have Jung&#8217;s eternal gratitude.

&#8220;How can anyone enter a burning house to save a stranger? It is not an easy act at all,&#8221; Jung said in a phone interview. &#8220;And what I am truly impressed about by the American men is that they know exactly how to treat a disabled person in a dangerous situation. I can&#8217;t thank them enough in words.&#8221;