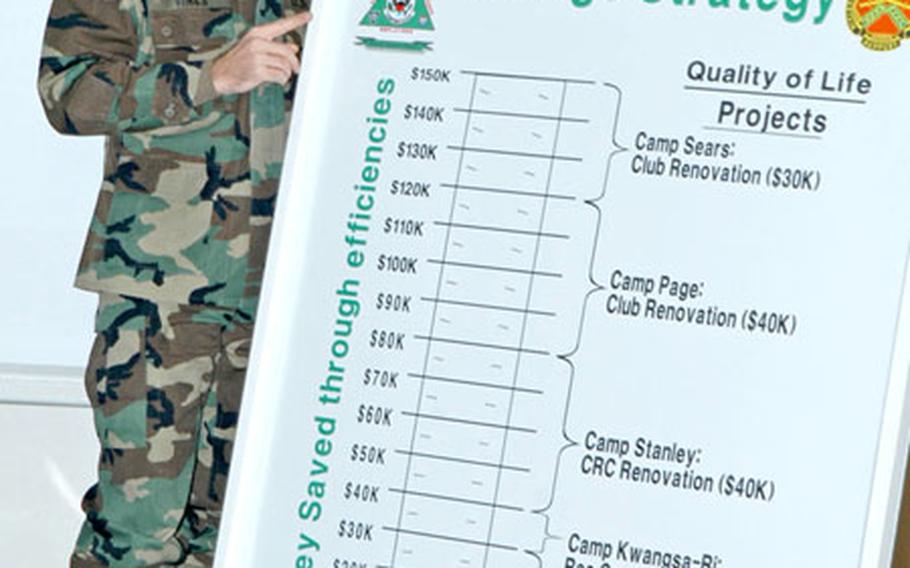 CAMP RED CLOUD, South Korea &#8212; The outgoing garrison commander here is touting efficiency reforms that have saved some $600,000 on various projects, and he&#8217;s trying to get his eventual replacement up to speed on the program.

Lt. Col. Brian Vines, who will leave Camp Red Cloud in July, used his final &#8220;State of the Garrison&#8221; address two weeks ago to highlight how the base saves money through streamlined operations.

That extra money, he said, can be used on quality-of-life projects at the base.

&#8220;That money stays right in the organization. It becomes discretionary income to invest in the needs of the garrison,&#8221; Vines said in an Army news release after the address.

As commander of the Camp Red Cloud Garrison, Vines oversees Red Cloud and 10 other installations, mostly small posts in Uijongbu.

Vines detailed a series of measures that have saved the money, pointing to a training program called Six Sigma as part of the reason for success.

Six Sigma is a corporate management system focusing on productivity and increased efficiency.

Base leaders took a seminar in November, and Red Cloud supervisors and employees started the training last month.

One example was buying a $260 fitting that allows fuel to be pumped directly from a vendor&#8217;s delivery truck to a holding tank on base.

Previously, the delivery truck could pump the fuel only into an interim fuel truck, which would then pump it into the holding tank.

Vines has been working with the incoming Red Cloud commander on a number of goals, he said. They include:

Officials also have unveiled a large signboard, decorated with a thermometer, to track the amount of money saved on projects across the garrison.

The sign will be placed in a public area and updated regularly, they said.