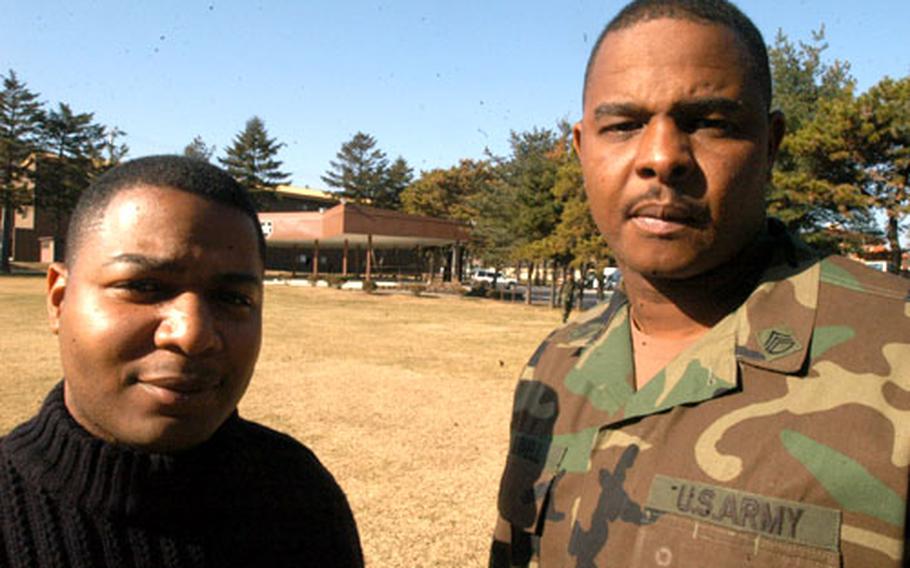 CAMP RED CLOUD, South Korea &#8212; The words to the 2nd Infantry Division song could be rapped instead of sung, according to one of several soldiers/poets to perform at Camp Red Cloud this week.

2nd ID band member Pfc. Derrick Gilbert, 27, of Little Rock, Ark., who will perform along with several other poets and jazz musicians at Camp Red Cloud&#8217;s Mitchell&#8217;s Restaurant on Friday, predicted that it&#8217;s only a matter of time until the military embraces hip-hop music.

&#8220;Hip-hop is just a form of jazz for my generation. Jazz music was once called jackass music because it was not accepted. Hip-hop is facing the same thing now,&#8221; said Gilbert, who added that the 2nd ID song could one day be rapped instead of sung by soldiers.

Hip-hop inspired the young soldier to write numerous poems, some of which he will recite during Friday&#8217;s performance, he said.

&#8220;That opening line just said a lot for situations where you grow up in a neighborhood like that. Every time I step outside I have got somebody watching for me to mess up so they can come down hard on me. &#8230; It applies unneeded pressure. In the military with me being a private first class, I never know when I am going to be catching flak from an E-4, E-5, E-6 or E-7,&#8221; Gilbert said.

Other inspiration, he said, comes from his cousin, who served with the U.S. Army in Afghanistan.

One of the original poems Gilbert plans to perform at Mitchell&#8217;s is called &#8220;No Apologies&#8221; and includes the following lines:

Gilbert said of the poem: &#8220;It is about me accepting myself as I am with my imperfections and not apologizing for it. That is how I was created.&#8221;

Another poet who will perform Friday, 61st Maintenance Company Staff Sgt. Roy Burrell, 42, of Columbus, Ohio, works in the driver-training program at 2nd ID. But his poems speak neither of safe operating procedures for military vehicles nor of his rage against South Korean drivers who, he said, flout the rules of the road.

&#8220;I want my poetry to be deeper than a poem about vehicle safety. I want each person to be able to walk away from my poems and come away with their own interpretation,&#8221; said Burrell.

Nor does his poetry dwell on the clash of armies in battle.

&#8220;I entertain the many moods of love &#8212; relationships between a man and woman, mother and son, father and family. Wholesome things,&#8221; said Burrell, who said he draws inspiration from Barry White and R&B artists.

Big Swole said during four years working in Washington, he was exposed to a potpourri of live poetry. Having the poetry evening in South Korea was his idea, he said.

&#8220;The inner city in D.C. is alive with poetry. Every night there is a different place. I wanted to create some of the scenes and experiences I had while I was there,&#8221; he said.

Army regulations limit the facial hair and clothing fashions associated &#8212; at least in stereotypes &#8212; with poets but Big Swole said the event would offer the same sort of atmosphere as a U.S. poetry night.

Area I Command Sgt. Maj. Jolanda Lomax will perform several of her poems and host the Camp Red Cloud poetry evening. Members of the 2nd ID band will play jazz to complement the poetry, and at the end of the evening, an open-mike session will allow anybody to perform. The only restrictions are on profanity and topics of a sexual nature, Burrell said.

The poetry evening starts at 8; entry cost is a donation of food or clothing for the Isaac House Children&#8217;s Home in Uijongbu, he said.