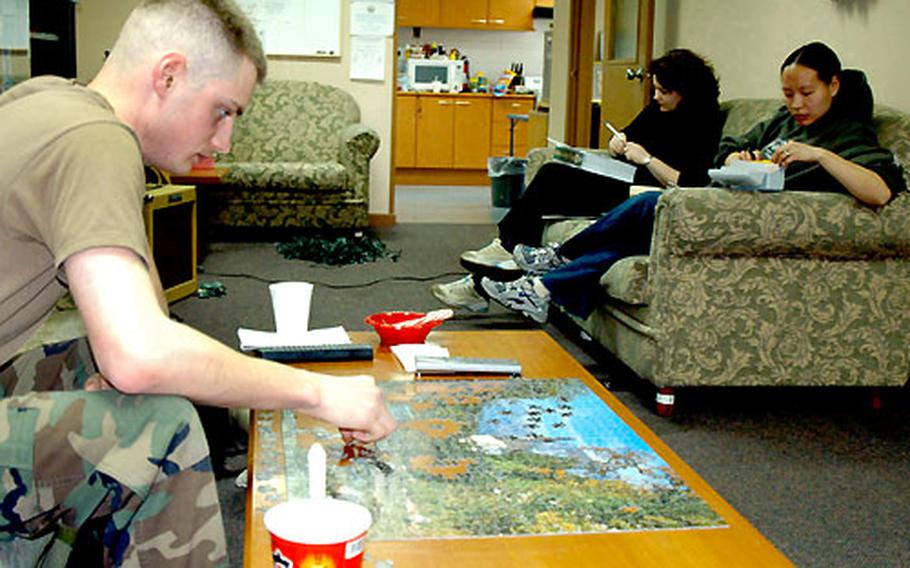 The young soldier is responsible for running the Camp Red Cloud Coffee House, one of a number of similar Area 1 facilities the Chaplain&#8217;s Office set up after the Sept. 11, 2001, terror attacks as places of refuge for military personnel.

The job feeds Graber&#8217;s caffeine habit, which, at five to six cups of black coffee a day, means he is in a constant state of alertness and readiness as he goes about his duties.

The coffee houses are not shops. They are set up like ordinary apartments and include fully stocked kitchens offering free drinks and food troops can prepare themselves. And if the volunteers have their way, the coffee houses will be available on more days and for longer hours.

The Camp Red Cloud Coffee House is inside what looks like a storage building next door to the Community Bank. It includes several large comfortable couches, board games, musical instruments, a big-screen television, DVDs, art materials and computers.

The atmosphere is a bit like a Starbucks, except that there usually are not fancy coffees such as lattes or cappuccinos available.

Volunteers can collect keys from the Chaplain&#8217;s Office and open the coffee house whenever they have free time. Generally it is open at lunch hour, Friday and Saturday nights and on weekends.

The Chaplain&#8217;s Office uses it for Bible study classes on Wednesday nights and Sunday mornings.

But the number of soldiers who use the facility, about two dozen a day, dropped earlier this year after MPs, who have a building nearby open 24 hours a day, stopped looking after the coffee house keys outside of Chaplain&#8217;s Office.

Graber said he was working on improving access. &#8220;We want to see more people come in. We want to know it is being well-used. You don&#8217;t see it open much and you don&#8217;t see a lot of people coming through because of the key issue,&#8221; he said, adding that volunteers such as Sunee Kim have indicated they&#8217;d be willing to help cover the extra hours.

Kim, a civilian who works at the nearby International Christian School, understandably may be fond of the place. Asked at the coffee house Tuesday the most interesting thing she&#8217;s seen here, she said that would be Senior Airman Steve Kim of the 604th ASOS.