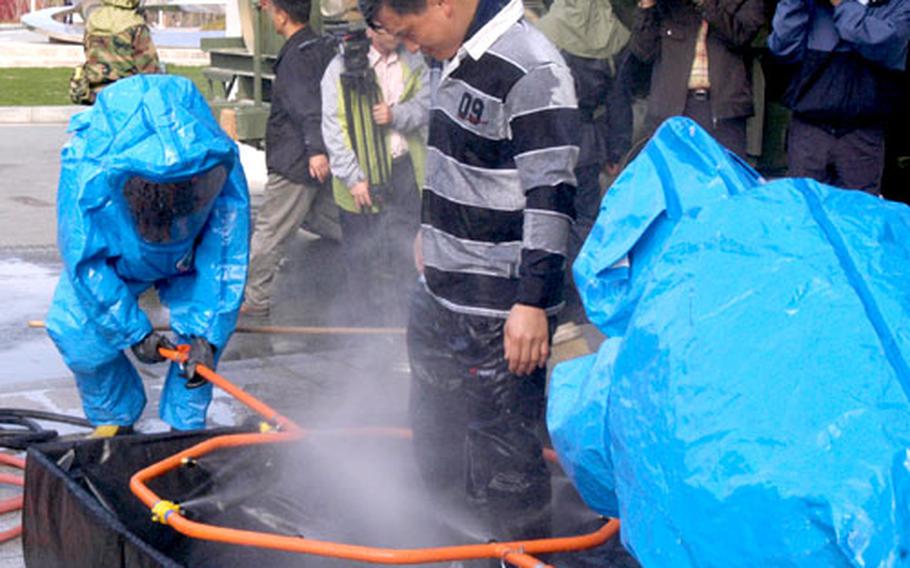 Firefighters from Chunchon city and Camp Page decontaminate a “victim” during a nerve gas drill near the base. (Stephanie Pearson / Courtesy of U.S. Army) 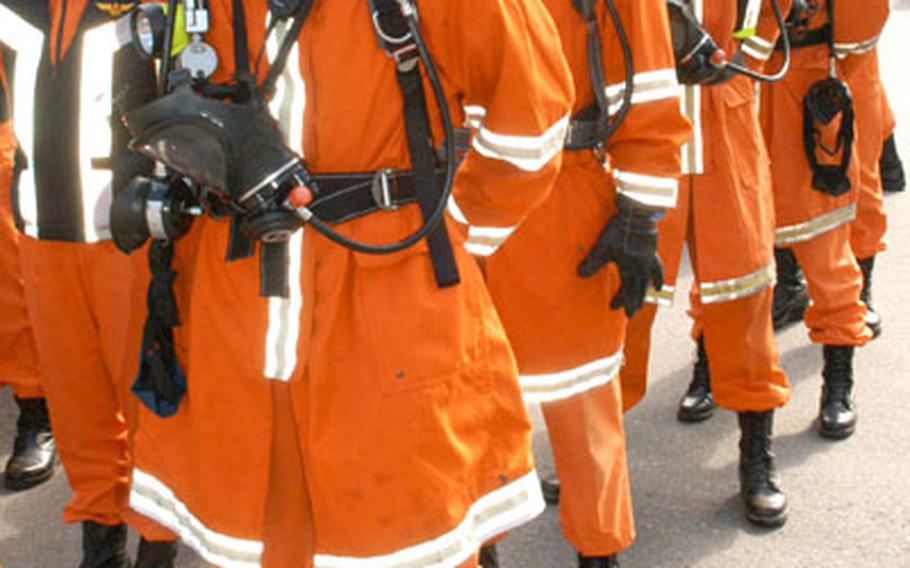 CAMP PAGE, South Korea &#8212; Firefighters from Camp Page trained beside their counterparts from South Korean emergency services Monday in an exercise designed to test their response to a terrorist attack on a large building.

Under a mutual aid agreement with the Chunchon Fire Department, the Camp Page Fire Department routinely responds to incidents near the base, which is near the center of the city, Cook said.

By mid-morning Monday, the emergency workers were scurrying about the resort, which includes a ski track and a golf course, and firemen were using tall ladders to wash down the outside of a high-rise hotel.

Kim Tae-kyong, Camp Page assistant fire chief, said his men set up equipment including an air tent, decontamination hoops, and a decontamination pool, then demonstrated their uses on a volunteer &#8220;victim&#8221; during the exercise.

&#8220;The downtown fire department does not have decontamination equipment (but) any time they broadcast we respond,&#8221; Kim said.

When victims arrive at the warm zone they are calmed, then washed with mild soap and water, Kon said.

&#8220;After that, the victim goes into the air tent and we wash them twice. Then we wrap them in a blanket and take them to a medical center for detailed examination,&#8221; he said.

Firefighters at Camp Page started planning for a chemical or biological terrorist attack in April 2002, Kon said. &#8220;That was when we were told about anthrax for the first time,&#8221; he said.

Since then, there has been one real-world incident in Area I, when a U.S. soldier received a letter from the United States containing an unknown powder. Emergency services responded but the powder turned out to be harmless, Kon said.

The Gangchon training went beyond the monthly decontamination practice his unit does, Kon said. &#8220;This training will enhance our ability to protect USFK employees and save lives.&#8221;