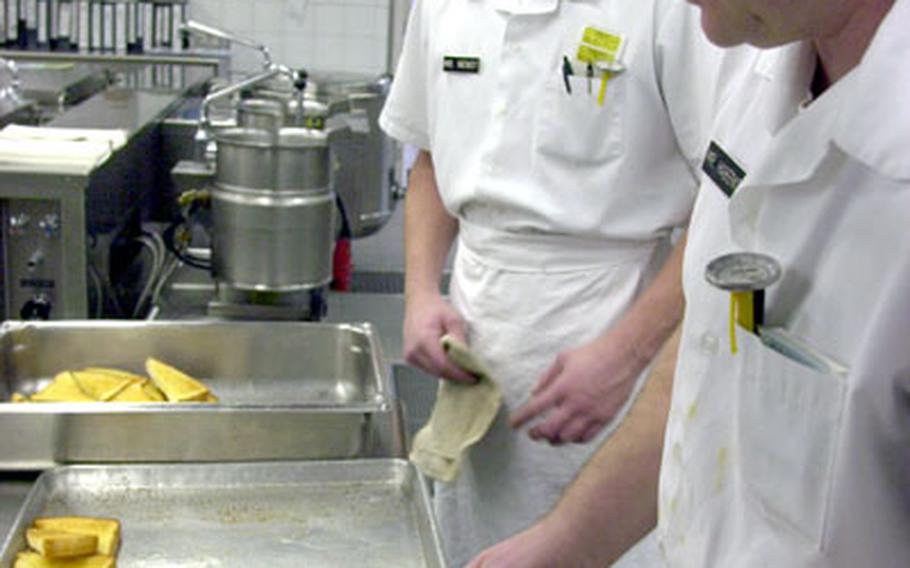 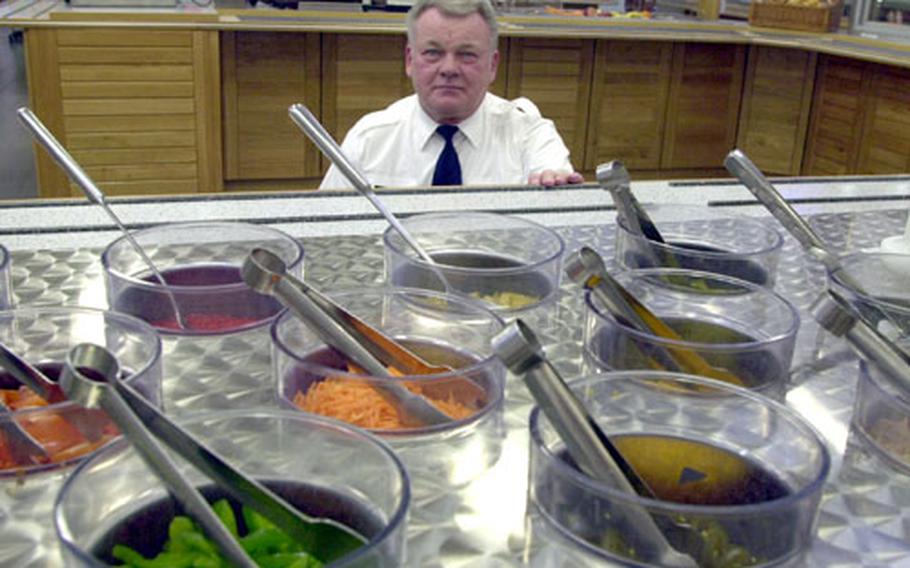 Camp Normandy Dining Facility manager Gerhard Bessner says the wide selection of items in the DFAC&#39;s salad bar was a factor in its success at this year&#39;s Philip A Connelly Awards. (Seth Robson / S&S)

GRAFENW&#214;HR, Germany &#8212; Nine months ago, the Camp Normandy chow hall did not exist. Last week, it took home the Connelly Award as the best large garrison dining facility in the U.S. Army.

The new facility is set to open in July.

The Camp Normandy facility will eventually cater only to soldiers at the camp&#8217;s Noncommissioned Officer Academy.

Army officials were amazed that such a new facility outperformed more established Army chow-halls at the Connelly Awards.

Just to get to the Connelly Awards finals, the Camp Normandy DFAC had to beat last year&#8217;s worldwide winner, the 1st Battalion, 4th Infantry Regiment dining facility in Hohenfels, to become the Grafenw&#246;hr Garrison champion.

Then it had to take out the Installation Management Agency title for Europe, said Grafenw&#246;hr food program manager Joyce Toney.

&#8220;We are the only garrison in the history of the Connelly Awards to win best large DFAC two years in a row. We have started a dynasty,&#8221; she said.

Teamwork, d&#233;cor, quality of food preparation and sanitation were all factors in the chow hall&#8217;s success, she added.

When the Connelly judges inspected the DFAC earlier in the year they found a salad bar with almost 30 items and a short order line with 20 items.

There also was a signature item, something no other DFAC had &#8212; a Philly steak with secret sauce, Toney said.

The only soldier working at the DFAC, which employs 61, mostly German staff &#8212; Sgt. 1st Class Jacqueline Albert &#8212; developed a marketing plan for short order items that involved naming them after the different companies at the NCO academy. There was the Alphagator Steak Sandwich, the Bravo Baked Beans and the Charlie Corn-dogs, Toney said.

On special days, the facility serves up meals from different countries in Europe.

On a Bavarian day, for example, the menu might include traditional German meals such as schnitzel or beef rouladen &#8212; rolls of beef stuffed with vegetables.

On Italian days there is pasta and lasagna, on Spanish days there are enchiladas and tacos.

And there are also Asia-Pacific days with fried rice and soul food days with Cajun meals, Bessner said.

The DFAC award will be presented in a ceremony hosted by the Army and the International Food Service Executives Association in Miami, in April.