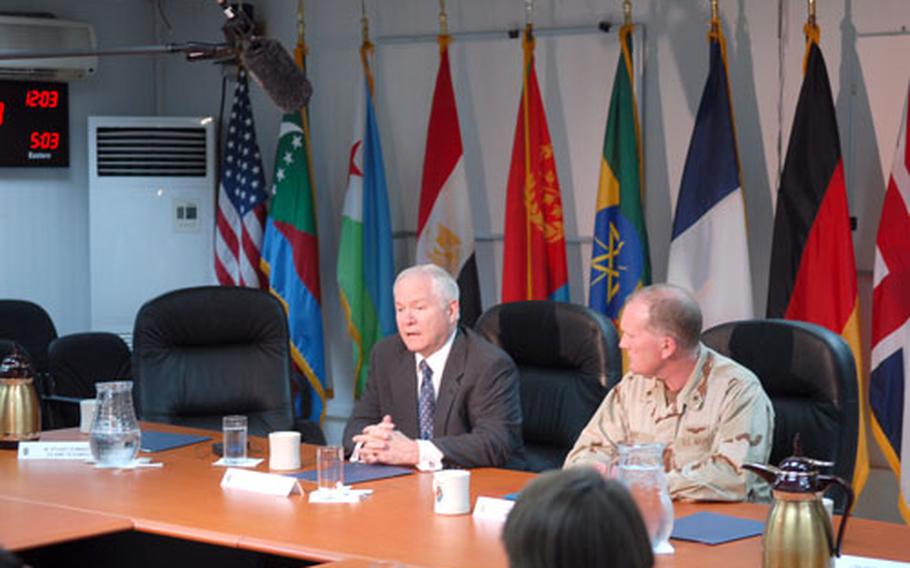 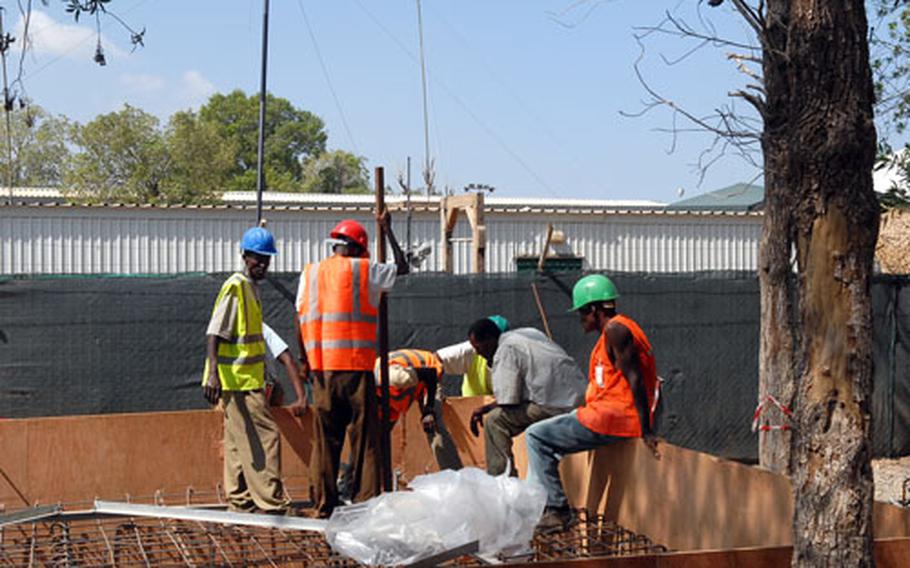 Construction crews work on the ever-changing face of Camp Lemonier in the northeast African country of Djibouti. The base was once a small, sleepy outpost where residents slept in tents and were served only one hot meal a day. The camp has since grown nearly five times its original size and hosts many newly installed comforts and amenities. () 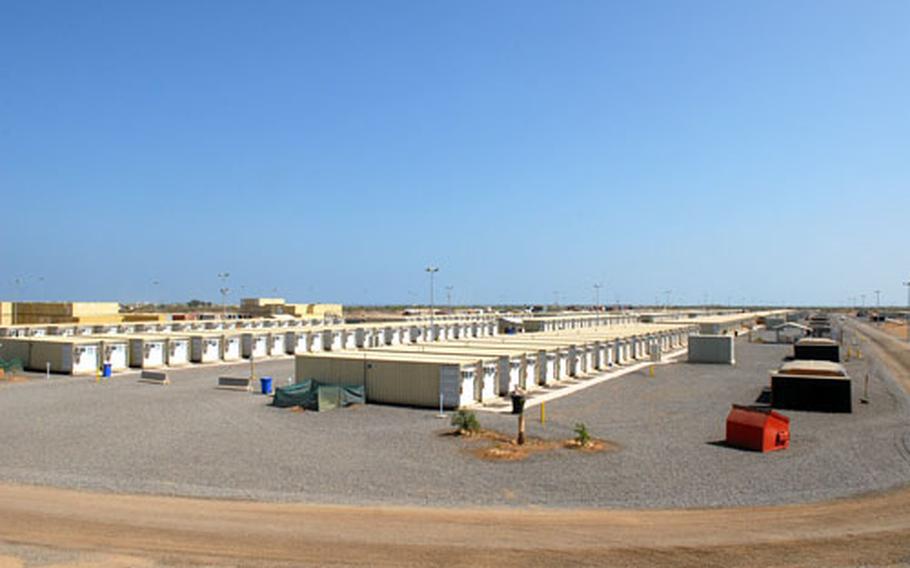 Some 600 containerized living units have been recently installed on Camp Lemonier in the northeast African nation of Djibouti. The living units are part of the expansion of the base which has grown from 97 acres to about 500. () 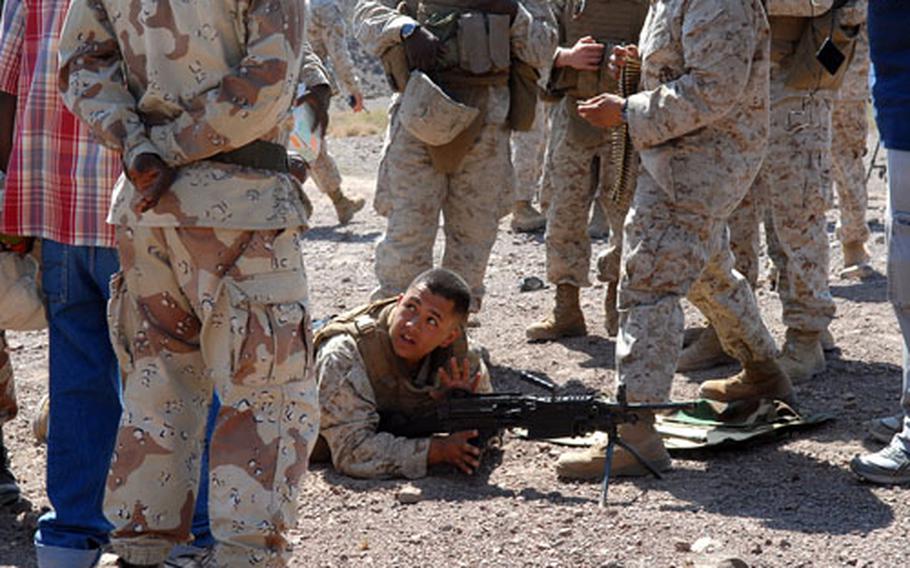 Lance Cpl. David Jaime, 21, of Santa Maria, Calif., demonstrates to the gathered members of the Djiboutian Air Force how to use a Squad Automatic Weapon at a joint exercise Dec. 2 near Arta, Djibouti. () 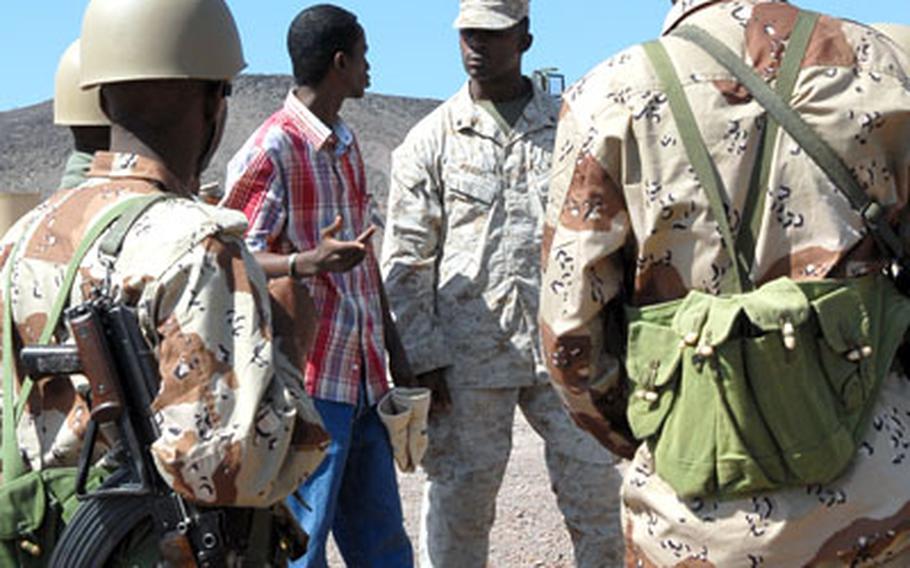 DJIBOUTI CITY, Djibouti &#8212; When Timea Voros touched down for the first time at the airport in Djibouti in November 2002, she was less than thrilled.

As she was driven to the U.S. military base at Camp Lemonier, the civilian contractor recalled gazing out the car window at the place she would call home for the next five years.

Camp Lemonier, a former French Foreign legion base in the northeast Africa country of Djibouti, was then a small outpost where residents were crammed into tents, ate one hot meal a day and had to deal with packs of stray dogs and the occasional hyena.

But much has changed, Voros and camp officials say. The evolving U.S. military mission in the Horn of Africa is reflected in the growth of the camp, which has expanded to more than five times its original land area and added comforts and amenities that point toward the region&#8217;s growing profile in the Pentagon.

Situated near the southern mouth of the Red Sea and amid the neighboring countries of Yemen, Somalia and Ethiopia, the small, impoverished nation of Djibouti &#8212; roughly the size of Massachusetts &#8212; offered American forces a strategically central location. In those early days, the U.S. military was concerned with tracking anti-American extremists in the wake of the Sept. 11, 2001, terrorist attacks in New York City and on the Pentagon.

Camp Lemonier became home to the Combined Joint Task Force-Horn of Africa in May 2003. Before then, it had operated from the USS Mount Whitney which arrived in the Horn of Africa in December 2002.

Much has changed for the task force. The mission has evolved into one focused on humanitarian assistance, joint military training exercises, and the building of schools and wells.

The camp also has grown. It has expanded to more than five times its original land area and added comforts and amenities that point toward the region&#8217;s growing profile in the Pentagon.

U.S. Navy Capt. John V. Heckmann Jr., the current commander of Camp Lemonier, said the growth &#8220;really is indicative of the evolution of the mission since we left the Mount Whitney.&#8221;

The camp originally covered around 97 acres, he said, housing roughly 600 U.S. servicemembers and other personnel. It is presently around 500 acres and is home to about 2,000 people.

Growth was made possible through a new agreement with the Djiboutian government that was hammered out in 2006 and made retroactive to October 2005. The land is leased at a cost of $30 million a year for five years, with options for two additional five-year periods. The base has an operational budget of about $170 million a year, Heckmann said.

The changes include more than additional space, according to Navy Cmdr. David A. Williams, the camp&#8217;s executive officer.

Upgrades have been made in the utilities, the computer system and quality of life, he said. The camp now boasts a coffee shop, a gym that resembles a high-price health club, two cantinas and classes offered by two colleges.

Gone are all but a few of the tents that not only provided uncomfortable lodging, but also were fire hazards. In October, two storage tents ignited, though there were no reported injuries, camp officials said. In their place are 600 air-conditioned trailers &#8212; or containerized living units &#8212; with about 2,000 beds. There also are plans to build an artificial-turf sports field.

While the camp continues to be home to the task force, there is a chance that the recently launched Africa Command will assume residence there.

With the possibility of even more change on the horizon, it is important to retain a certain amount of flexibility, Heckmann and Williams said.

Both Heckmann and Williams would not speculate on the likelihood of AFRICOM coming to Djibouti. The new command is presently based in Germany and will be fully operational in 2008. At the moment only two African countries &#8212; Liberia and Djibouti &#8212; have offered to host it.

Heckmann did say, however, that should AFRICOM come to Djibouti, Camp Lemonier will be ready to transform once again.