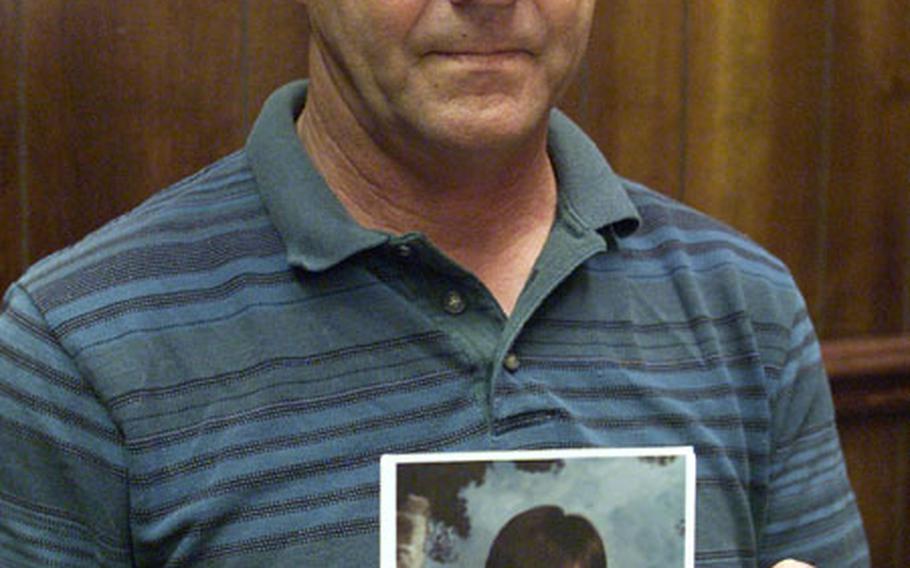 Retired Marine Jerry Ensminger with a picture of his daughter, Jane, who was conceived on Camp Lejeune and died of leukemia when she was 9. (Courtesy of Randy Davey, Jacksonville (N.C.) Daily News)

A health survey of 12,598 children born to women who were living at Camp Lejeune over a 17-year period revealed that 103 children suffered childhood cancers or birth defects, according to report filed by the Agency for Toxic Substances and Disease Registry, a unit of the U.S. Department of Health and Human Services.

The findings do not conclusively link the contaminated water to the defects and illnesses, however; the only conclusion researchers will draw now is that &#8220;the number of cases warrants further study,&#8221; said Scott Mall, an agency spokesman.

In May 1982, scientists conducting routine water testing found traces of the degreaser tricholoroethylene, or TCE, and the dry-cleaning solvent tetrachloroethylene, or PCE, in the drinking water at the enlisted Tarawa Terrace and Hadnot Point housing units on Camp Lejeune.

Eventually, the source of the contamination was traced to the ABC One-Hour Cleaners across the street from the base, and to a vehicle maintenance and body shop on the base.

Because of inconsistent results with initial testing, wells supplying water to the housing complexes weren&#8217;t shut down for another three years.

Mall would not say how the reported results compare with diseases suffered by children in the general population. Of the 103, 33 children suffered from anencephaly, or a congenital absence of most of the brain and spinal cord, and spina bifida; 41 suffered from oral clefts, and 29 were diagnosed with childhood cancers of leukemia and lymphoma.

But according to the Atlanta-based Centers for Disease Control and Prevention, oral clefts constitute one of the most common birth defects in the United States, and that prevalence of cleft lip/palate in the general population is about 1 per 1,000 births. At Lejeune, 12 clefts have been confirmed out of 12,598 births. Another 29 have been reported.

The survey participants, questioned in telephone interviews between September 1999 and January 2002, represent about 80 percent of those eligible to be surveyed, Mall said.

Marine Corps and agency officials estimate that between 16,000 and 17,000 women were pregnant and living on the base between 1968 and 1985, but incomplete records and transitioning Marines and families complicated the search, he said.

&#8220;That nearly 80 percent of those eligible responded to the survey supports the likelihood that most birth defects and childhood cancers among the eligible children have been identified,&#8221; Dr. Wendy E. Kaye, chief of the epidemiology and surveillance branch of ATSDR, said in a statement. &#8220;The key issue now is whether the diagnoses can be confirmed for most, if not all, of the potential cases of the birth defects and childhood cancers.&#8221;

ATSDR is a public health agency responsible for evaluating toxic substances in the environment and how they affect people.

The Marine Corps helped the agency in the survey by finding some of the participants and establishing a hot line, and will continue to support the agency in future studies, Lt. Gen. Rick Kelly, deputy commandant for installations and logistics, said in a statement.

&#8220;I want you to know that the welfare of our extended Marine Corps family is very important to the Commandant and me,&#8221; Kelly said in a statement.

&#8220;We understand scientific research takes time, so we will continue to help ATSDR with its work so they may complete their study as soon as possible.&#8221;

In follow-on studies, health researchers will analyze only children who suffer from anencephaly, spina bifida, cleft lip, cleft palate, childhood leukemia and childhood lymphoma because past research has linked those types of birth complications with the chemicals, Mall said.

So while other children might have suffered from other illnesses, they will not be included in any future studies, he said.

The study, which could take until 2006 to complete, will focus on reviews of medical records of the 103 cases. Researchers also will use a computer model of the Camp Lejeune drinking water system to determine how much TCE and PCE would have been present and which housing units would have received the contaminated water.

This computer simulation will help researchers determine which pregnant women were exposed to volatile organic compounds. Researchers also will have a control group of children born in the same time period and whose mothers lived in the same housing units but experienced no health problems or defects, Mall said.

ABC Cleaners opened in 1954, and the first well was drilled four years later. But researchers only surveyed people born in 1968 and after because that is when North Carolina first began keeping computerized birth records, said Mall, who suggested those born earlier and who suffer similar health conditions monitor the agency&#8217;s research.

The Environmental Protection Agency and Marine Corps have worked to clean the sites over the years. The Marine Corps in the past has estimated having spent about $90 million since 1992 on remediation of contaminated sites, and anticipates spending another $150 million over the next two decades.