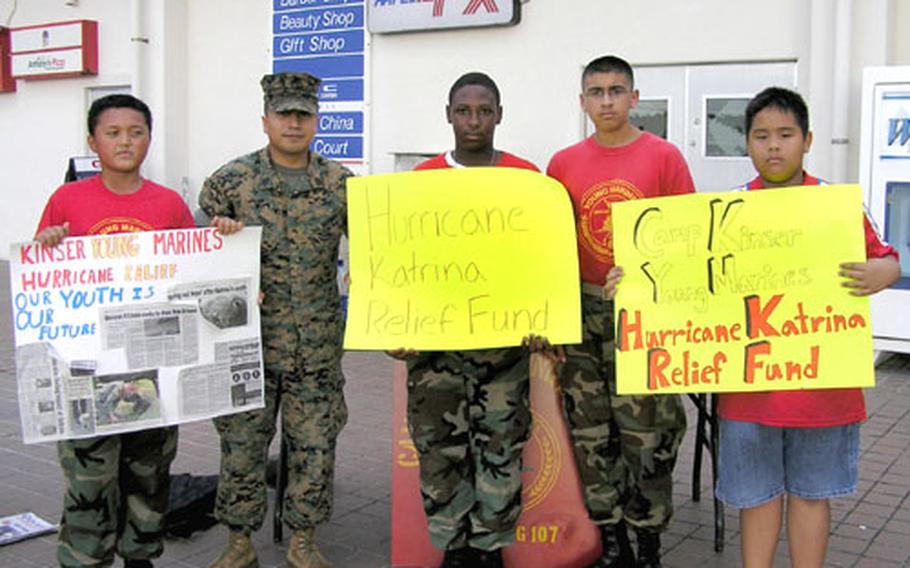 CAMP FOSTER, Okinawa &#8212; Members of the Camp Kinser Young Marines showed their compassionate side recently as they raised more than $1,000 for the American Red Cross to support Hurricane Katrina relief efforts.

On Sept. 16, 11 Young Marines, ages 8 to 14, presented a check for $1,155 to the Red Cross, according to a Marine news release. They raised the money in two hours on Sept. 9 by asking for donations outside stores on the camp. Along with holding signs asking for donations, the Young Marines also performed a little physical training to attract donors.

&#8220;We did push-ups and went to different stores to help collect money,&#8221; Richard C. DeLeon, a member of the Camp Kinser Young Marines, was quoted in the release as saying.

According to Gunnery Sgt. Guadalupe Perez Jr., the Camp Kinser Young Marines&#8217; commanding officer, the decision to raise the money was made after seeing the hurricane&#8217;s aftermath on the news.

&#8220;After discussing it, putting together a collection effort was a no-brainer,&#8221; Perez stated in the release. &#8220;It needed to get done, and the Young Marines were available to do it. They took a lot of pride in their effort.&#8221;

Perez added that the money raised was more than anyone in the organization expected.

American Red Cross representative Chuck Miller accepted the donation and assured the Young Marines their efforts would make a difference in the victims&#8217; lives, according to the release. Miller said the Red Cross on Camp Foster already had received more than $16,000 for the relief effort from servicemembers, their families and civilians.