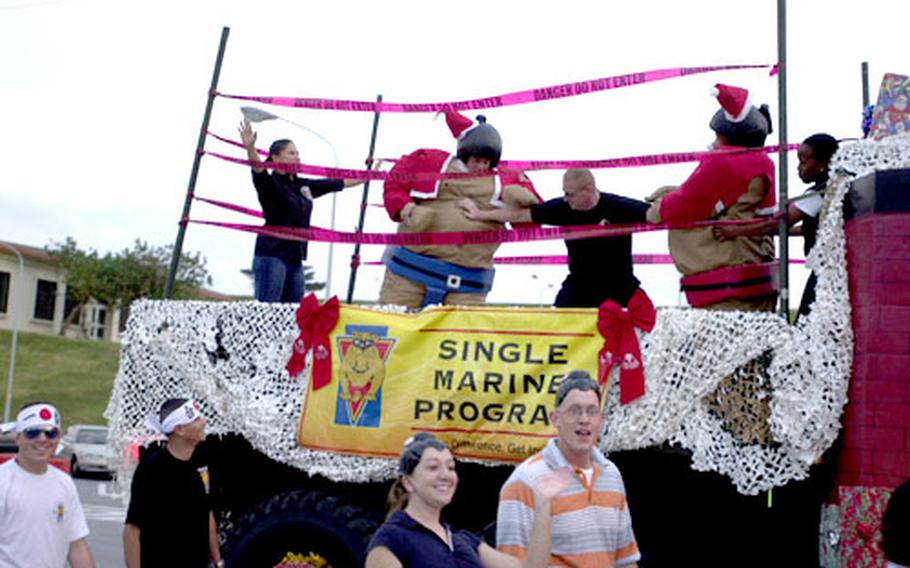 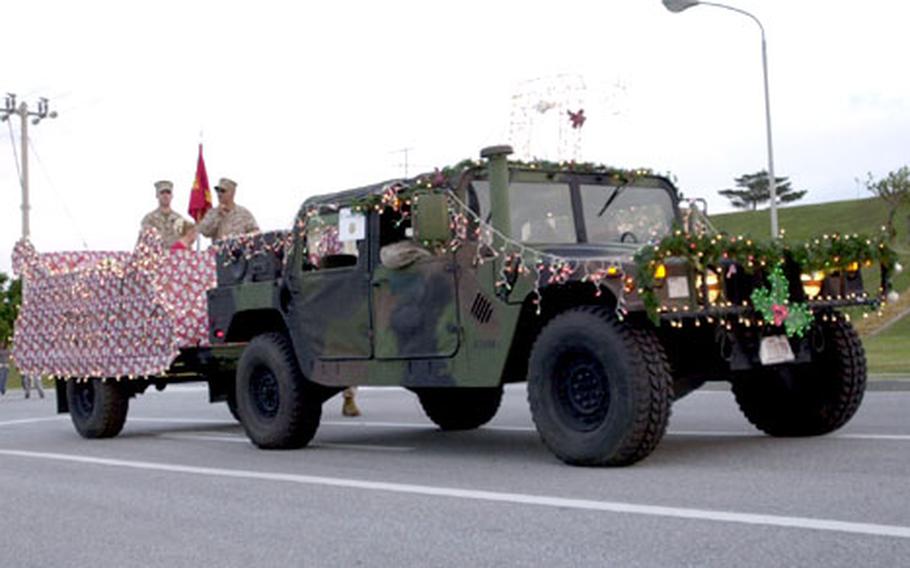 Marines got into the Christmas spirit at Camp Kinser&#39;s parade Wednesday as they decorated this Humvee and trailer for the occasion. (Fred Zimmerman / S&S) 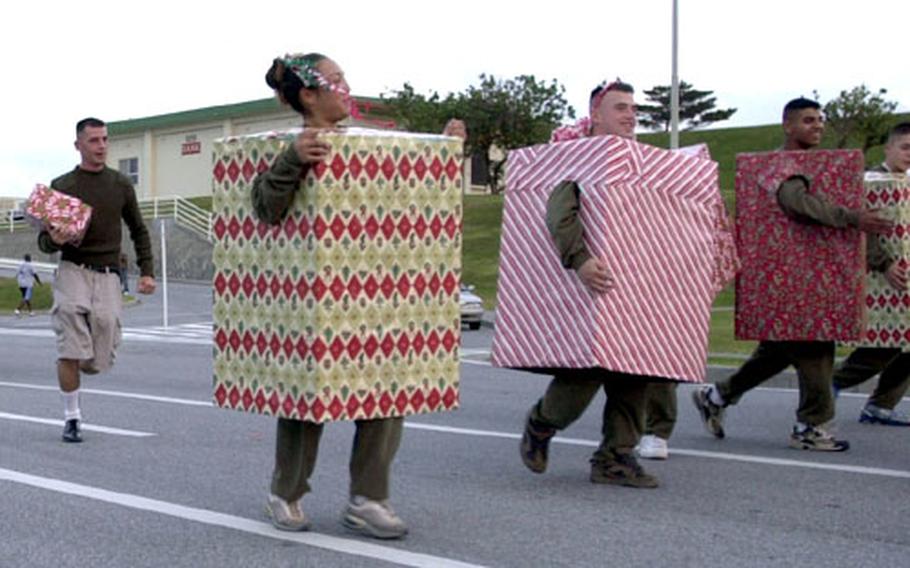 Marines, kids and others dressed as gifts make their way down the parade route during Camp Kinser’s annual Christmas parade Wednesday on Okinawa. (Fred Zimmerman / S&S) 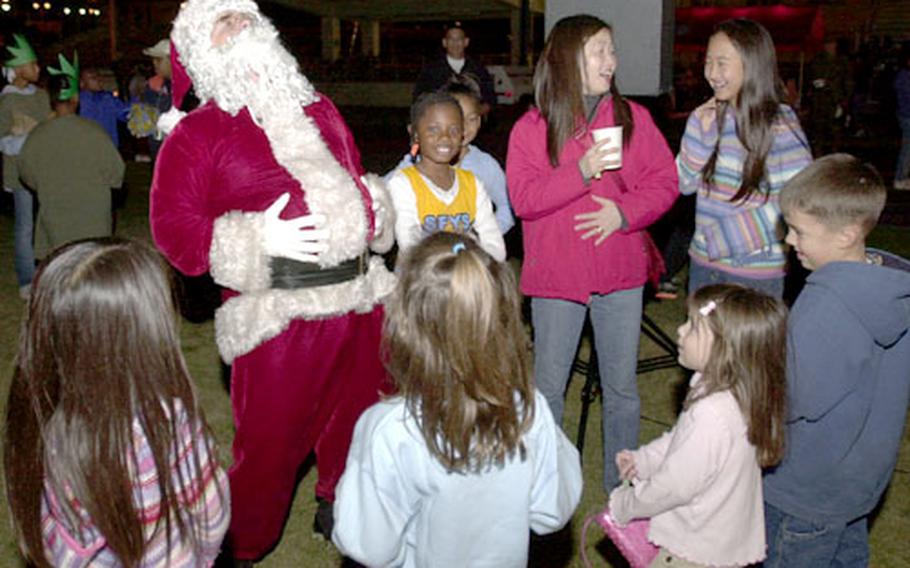 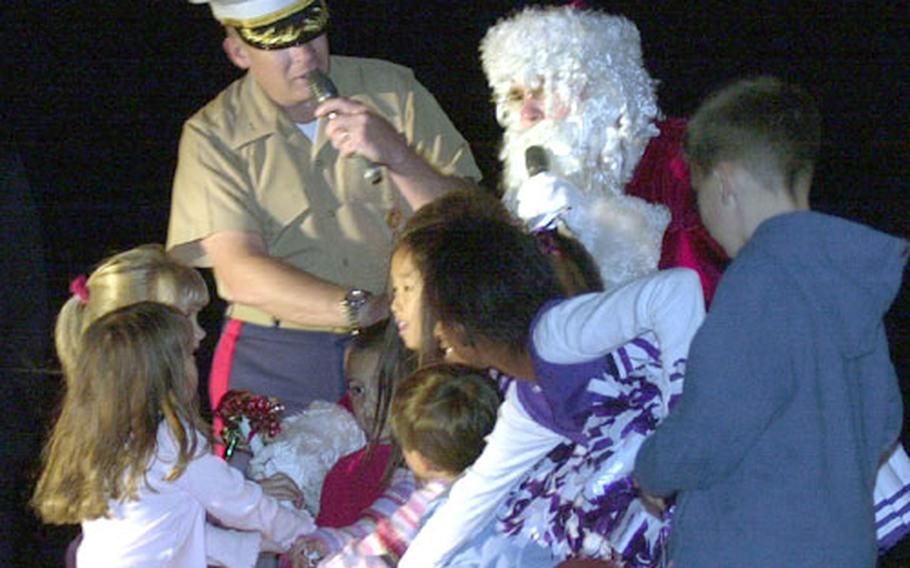 Col. James Kessler asks Santa and his helpers to flip the switch to light the base Christmas tree after the parade. With the help of the children, Santa completed the task. (Fred Zimmerman / S&S)

Marines also showed their lighter side as various units decorated vehicles in Christmas garb and some Marines donned costumes. The Single Marines Program, for instance, used a seven-ton truck bed to create a sumo ring in which two members, dressed in large sumo wrestling costumes complete with Santa hats and jackets, squared off.

But the Marines reverted to tradition &#8212; sort of &#8212; when it came to ending the parade. As usual in such events, the last person in the procession was Santa Claus.

But as the announcer informed the crowd, jolly old St. Nick&#8217;s reindeer were on strike, so Santa was looking for another mode of transportation. A bright red fire engine saved the day: Santa was plunked in the bucket on its ladder and delivered on time.

After the parade, onlookers and marchers gathered at Roberts Field for a brief Christmas concert by the III MEF Band and the lighting of the Camp Kinser Christmas tree.

Camp commander Col. James Kessler attempted to flip the switch &#8212; a large wooden pole &#8212; but said he couldn&#8217;t do it. He called Santa up to complete the task, but he too couldn&#8217;t muster the strength. Several children then were called on stage to assist Santa &#8212; and the tree finally was lit.