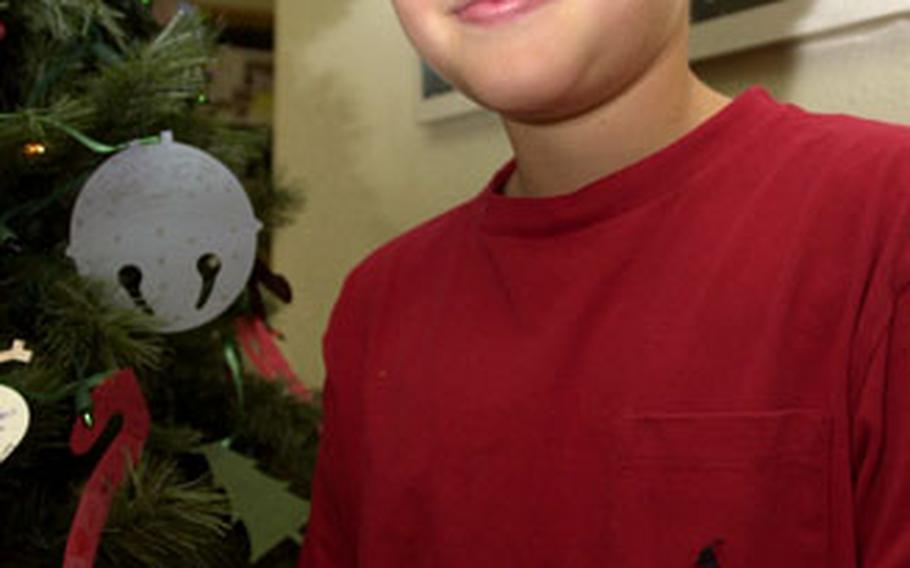 Kinser Elementary School fifth-grade student Jeffrey Black stands by an ornament he made, which wishes his family a good Christmas and that his sister gets everything she asked for. (Fred Zimmerman / S&S)

Kinser Elementary School fifth-grade student Jeffrey Black stands by an ornament he made, which wishes his family a good Christmas and that his sister gets everything she asked for. (Fred Zimmerman / S&S) 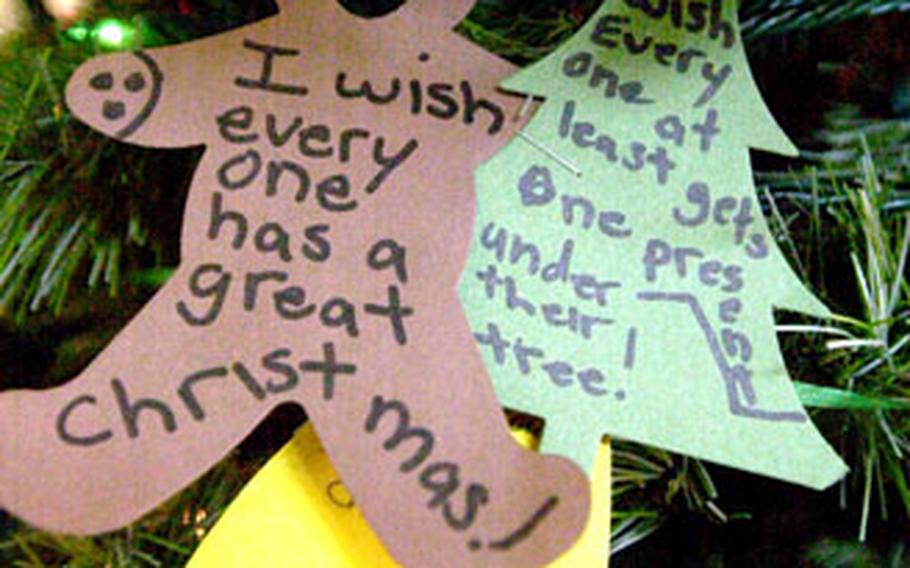 Two of the more than 500 ornaments made by Kinser Elementary School students hangs on the tree just inside the school’s entrance. (Fred Zimmerman / S&S)

CAMP KINSER, Okinawa &#8212; Kinser kids care: It&#8217;s a phrase heard regularly from staff members at Kinser Elementary school and a tradition pupils continued this week as they hung more than 500 ornaments adorned with Christmas wishes in the school&#8217;s entrance.

But what makes these wishes special is that not one of them is for the child who wrote it. They all are intended for others &#8212; mostly people the children don&#8217;t even know.

&#8220;We were excited,&#8221; said fifth-grader Jeffrey Black, 10, the student council president. &#8220;The most exciting part was going to the classes and talking to the students &#8230; especially the kindergarten classes. They all started jumping up and down they were so excited.&#8221;

The messages were written on pieces of colored paper shaped like small gingerbread men, snowmen, lights, candy canes, Christmas trees and bells. Strung together by ribbons, they&#8217;re hung on walls and ceilings by the office and on a Christmas tree in the entrance.

Black said his wish is that his family will have a great Christmas and that his sister will get everything she wanted.

Randi Meyer, a 9-year-old fourth grader, said she wished that every orphan could get the gifts he or she wanted. She said writing the message helped her feel like she was spreading holiday cheer by thinking about others.

Stoller said one of the wishes she liked most was that for a father to return home from Iraq this Christmas to be with his family.

For Kinser students to think about others is nothing new, Stoller said. In the last year they&#8217;ve raised thousands of dollars for tsunami and hurricane victims.