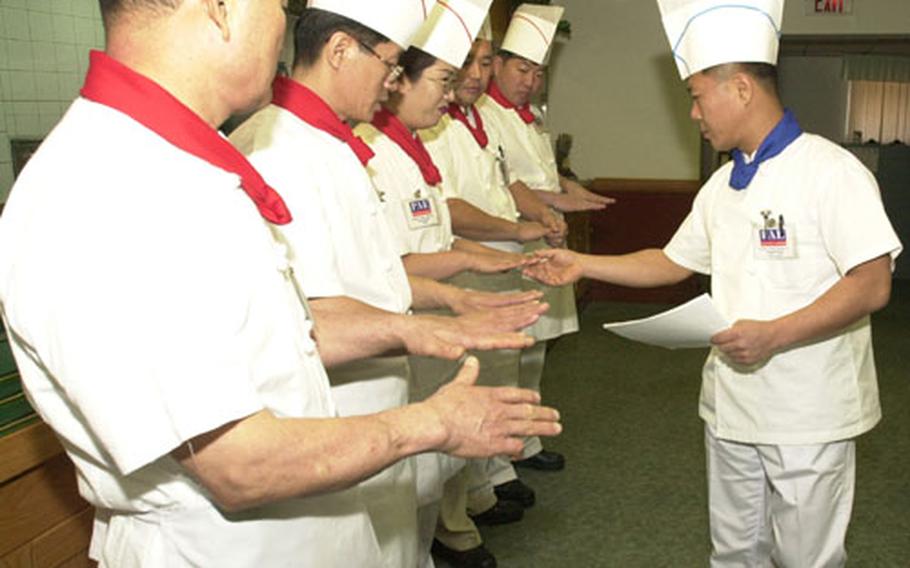 Cooks in the Camp Jackson Dining Facility have their hands inspected for cleanliness by Kim Do Pung prior to the lunch meal on Thursday. (Greg L. Davis / S&S)

Cooks in the Camp Jackson Dining Facility have their hands inspected for cleanliness by Kim Do Pung prior to the lunch meal on Thursday. (Greg L. Davis / S&S) SEOUL &#8212; Camp Jackson&#8217;s dining facility staff members knew they had an excellent establishment. Now, they have the award to back it up.

The facility earned a second-place finish in the large garrison category of the Phillip A. Connelly Awards Program, an Army-wide food competition.

No U.S. soldiers work there: Rath supervises 29 contracted South Korean employees. &#8220;A lot of people have stopped by to congratulate us and to pat us on the back.&#8221;

This was the Jackson staff&#8217;s second straight appearance in the Connelly award program. They didn&#8217;t place last year.

Warrant Officer Peter Mortrynczuk of the Army&#8217;s Center of Excellence, Subsistence at Fort Lee, Va., was part of the three-man team that inspected the operation in early December.

He told Stars and Stripes they were impressed with how well the staff presented a 40-year-old facility.

Rath and Kim Chae-kyu, his shift leader, are traveling to Dallas for the Joint Services Excellence in Food Service Awards on April 12.

Rath said he&#8217;s excited and hopes to learn enough to push his facility into the No. 1 spot next year.

&#8220;Everything from culinary arts and food networking to sanitation and managerial skills.

&#8220;All finalists displayed high standards of excellence, were very competitive and are congratulated for their outstanding performances.&#8221;

While the award and recognition are nice, Rath is happiest for the troops.