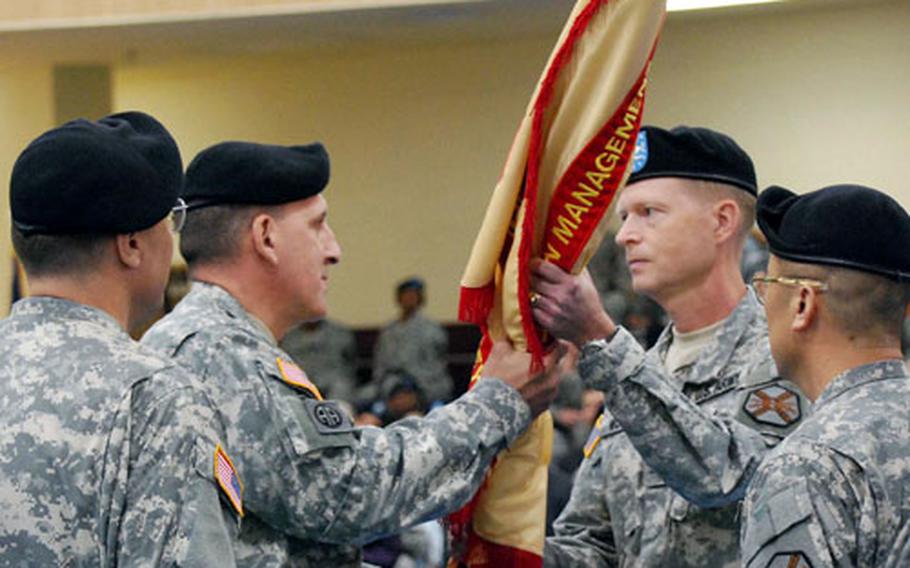 Col. Joseph P. Moore, second from right, is handed the colors of the U.S. Army Garrison-Humphreys during a ceremony at which he assumed command of the garrison. Moore replaces Col. John E. Dumoulin Jr., left, who moves to a new assignment after heading the garrison for two years. Handing Moore the colors is Brig. Gen. John Uberti, commander of the Army’s Installation Management Command-Korea. At right is the garrison’s Command Sgt. Maj. Jason K. Kim. (Kelly Lowery / U.S. Army)

Moore had been director of the Region Transformation Office for the Installation Management Command-Korea, stationed at Camp Humphreys.

Command of the garrison is seen as an especially key and high-pressure assignment because Camp Humphreys in Pyeongtaek is being tripled in size to become the U.S. military&#8217;s flagship installation in South Korea in future years, an intricate, broad-scale project currently slated to cost around $12.9 billion.

Though headquartered at Humphreys, the garrison also includes camps Eagle and Long in Wonju and a U.S. military compound at Suwon Air Base, a South Korean air force installation.

Dumoulin had been &#8220;the right commander, in the right place at the right time&#8221; at Humphreys, Brig. Gen. John Uberti said in formal remarks at the ceremony. Uberti is commanding officer of IMCOM-Korea.

Uberti cited a lengthy list of new facilities within the garrison that had opened while Dumoulin was commander.

They included, at Humphreys, a third family housing tower, new barracks, a child development center, a new extension to the Humphreys Army Lodge, and three new gyms; at Camp Eagle, a new community activity center; and, at Suwon, refurbished barracks for soldiers.

In farewell remarks, Dumoulin thanked his staff, the Humphreys community and others for their support and efforts aiding the transformation.

&#8220;These last two years have been great years &#8230; I knew the job would prove challenging,&#8221; Dumoulin said. But he took satisfaction in what the garrison had accomplished, he said.

Addressing Moore and his family, Dumoulin said, &#8220;You are coming here at the right time. Change is all around us here and you will be here to see it and make it happen.&#8221;

In his own remarks toward the close of the ceremony, Moore pledged &#8220;an unwavering commitment to excellence to the people of our community; the soldiers, their families and those who support them.&#8221;

The ceremony was to have been held at 10 a.m. on Freedom Field but because of rain it was instead held inside the sprawling, newly built Super Gym.

Moore was commissioned in 1985 as an engineer officer. He&#8217;s a distinguished military graduate of Virginia Tech in Blacksburg, Va. He later completed a master of architecture degree there. He&#8217;s also a graduate of the Army&#8217;s Airborne School, its Command and General Staff College, and War College.