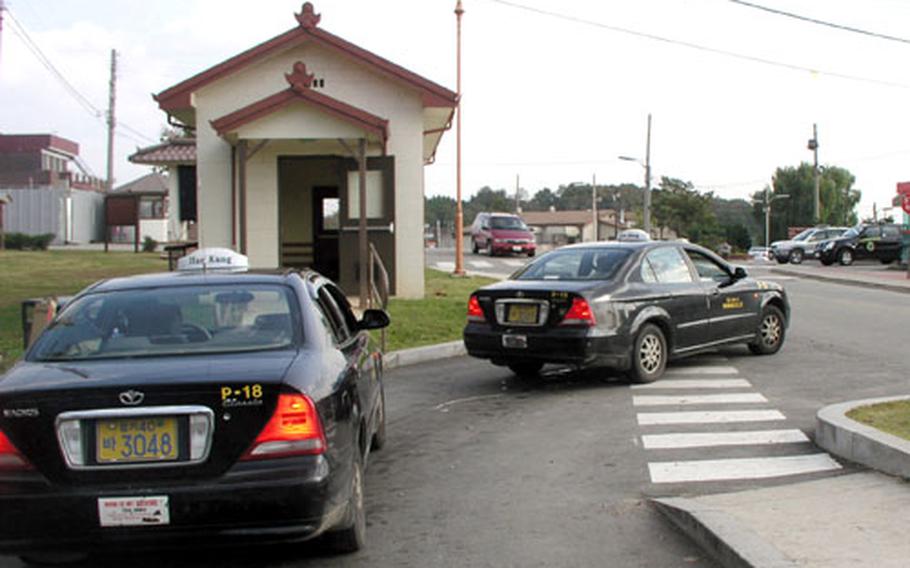 At Camp Humphreys, South Korea, on Friday, a cab pulls out of the taxi stand near the post’s walk-in gate. Post officials are hoping to increase the number of taxis operating on post during peak hours. (Franklin Fisher / S&S)

And they&#8217;re hoping that the Army and Air Force Exchange Service succeeds in negotiating a cap that would limit fares for trips inside the installation, Bob McElroy, chief spokesman for the U.S. Army Garrison Humphreys, said Thursday.

AAFES is hoping to bring in the extra cabs by contracting either with individual drivers or one or more additional companies, or a combination of the two, whatever arrangement will meet the need, AAFES officials said.

Officials hope to add 12 to 15 taxis to those that already work on the installation, McElroy said.

An AAFES spokesman on Thursday said it&#8217;s too soon to know what the actual number of additional cabs might ultimately be.

Haekang&#8217;s current rates are an initial charge of $2.30 for the first mile or five minutes, whichever is reached first, then 30 cents for every 1,200 feet traveled or 90 seconds elapsed, according to Potter.

In July, a second taxi firm began operating at Yongsan Garrison in Seoul and added 50 taxis to the number serving Yongsan.

The company, Yonhap Transportation, charges an initial fare of 1,900 South Korean won ($2.07) with increases of 100 won (11 cents) based on time and distance. That&#8217;s lower than the service already provided by World Cup Arirang Tourism Company Ltd., whose fares start at $2.50 and rise 25 cents for every quarter-kilometer after the first 1.75 kilometers.

Fares inside Yongsan are capped at $3 for all one-stop, on-post trips with Arirang.