Camp Humphreys trying to be a good neighbor in South Korea 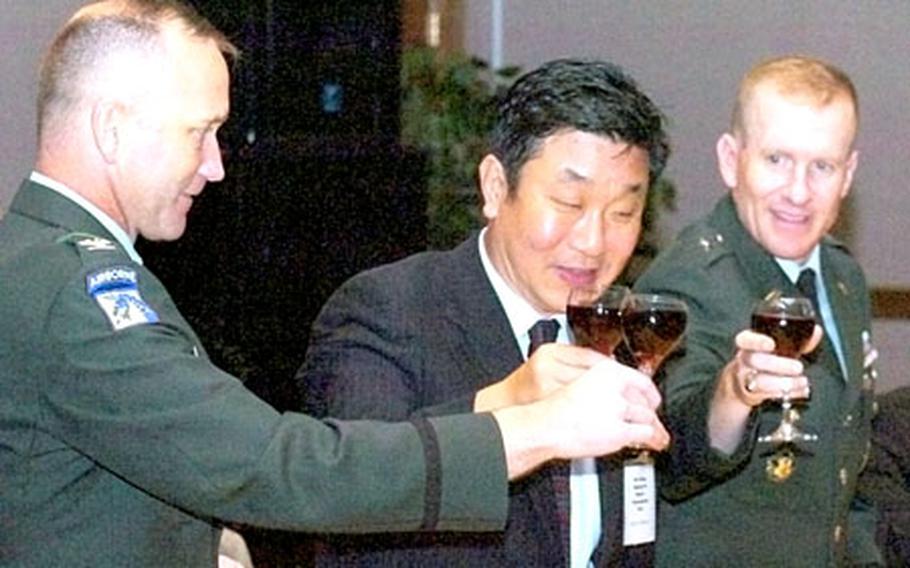 PYONGTAEK, South Korea &#8212; Officials at Camp Humphreys in South Korea have launched the base&#8217;s first Good Neighbor Awards program, one that recognizes Koreans and Americans whose actions promote good relations between the U.S. military and the South Korean public.

The program &#8212; one of the latest moves by base officials to foster good relations with South Koreans &#8212; will present annual awards in three categories: Korean Good Neighbors, U.S. Good Neighbors, and military units at the base that distinguish themselves through some form of community relations.

U.S. Forces Korea commander Gen. Leon J. LaPorte set up the program in 2003. It directs all U.S. military units in South Korea to take proactive measures to win the good will of the Korean public.

Barkley said the awards program is &#8220;a way to increase understanding and also acknowledge the effort on everyone&#8217;s part.&#8221;

Area III&#8217;s Good Neighbor Awards program kicked off June 24 with an awards dinner for 19 Koreans and 19 Americans. A unit award went to the 527th Military Intelligence Battalion, cited for &#8220;total and unwavering support of community relations programs&#8221; that included weekly reading and conversational programs in a public library.

Activities for which awards were made included landscaping or design projects on base; volunteer English-language tutoring in an area high school; volunteer visits to an area orphanage; sponsorship of cultural events; and translation services, among others.

In remarks at the awards dinner, Taliento said LaPorte&#8217;s Good Neighbor Program aims &#8220;to continually improve relations between the United States military and the Korean community through increased positive engagement with our neighbors in a host of plans and programs.&#8221;

He thanked recipients &#8220;for richly supporting the time-honored institutions of friends, neighbors, and allies.&#8221;