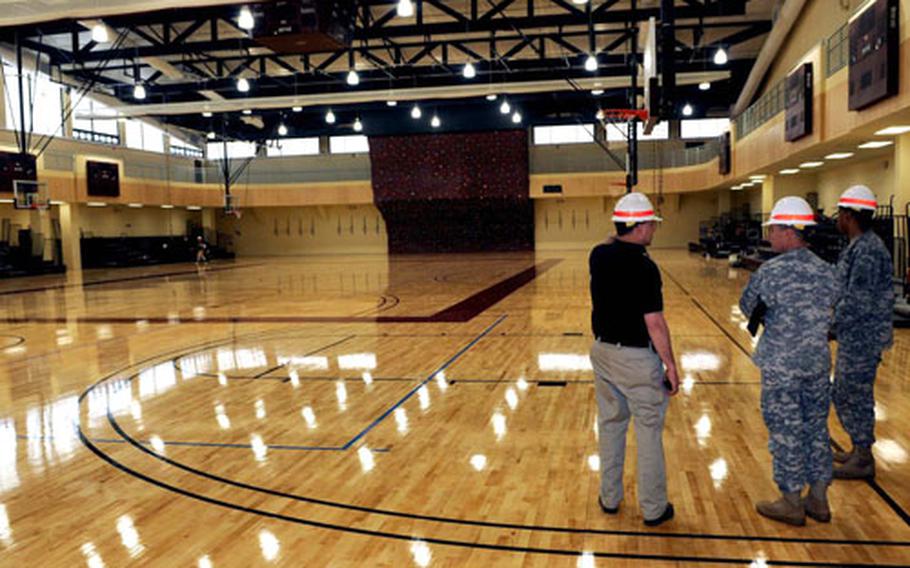 PYEONGTAEK, South Korea &#8212; The U.S. military&#8217;s biggest fitness center in South Korea will open soon at Camp Humphreys, to be followed by another new gym a month later.

The openings will bring to three the number of gyms to come into service at Humphreys this year.

The $18.9 million Humphreys Community Fitness Center, also called the "supergym," is to open Oct. 10 next to Soldiers&#8217; Field. It will be the U.S. military&#8217;s biggest on the peninsula. It stands three stories, measures 109,512 square feet, and boasts a gym, indoor pool, running track and four-level parking garage, among other features.

That will be followed in November by the opening of a gym in the post&#8217;s Zoeckler Station area. No date has been set for the opening.

The Zoeckler gym is of the same design as the MP Hill gym, which opened in February.

The gyms cost about $7 million each, and are two stories with 45,000 square feet of space.

In addition, officials have decided to use the old post gym, Building 111, built in 1976, for teen sports, he said.

That will allow pre-teen youngsters to have to themselves the sports room at the post&#8217;s Youth Services Center. The room is fitted with backboards and hoops for basketball.

Until now, teens and pre-teens had to share the space for sports at the center or use the post gym, whose spaces were dominated by soldiers working out or playing at individual or unit sports.

It also has showers, a sauna and hot tub, offices, classrooms, meeting areas, a juice bar and outdoor picnic areas. The 300-space garage is connected to the fitness center by a skywalk.

McElroy said the supergym has "the potential to be kind of the heart of the community with all it has to offer."