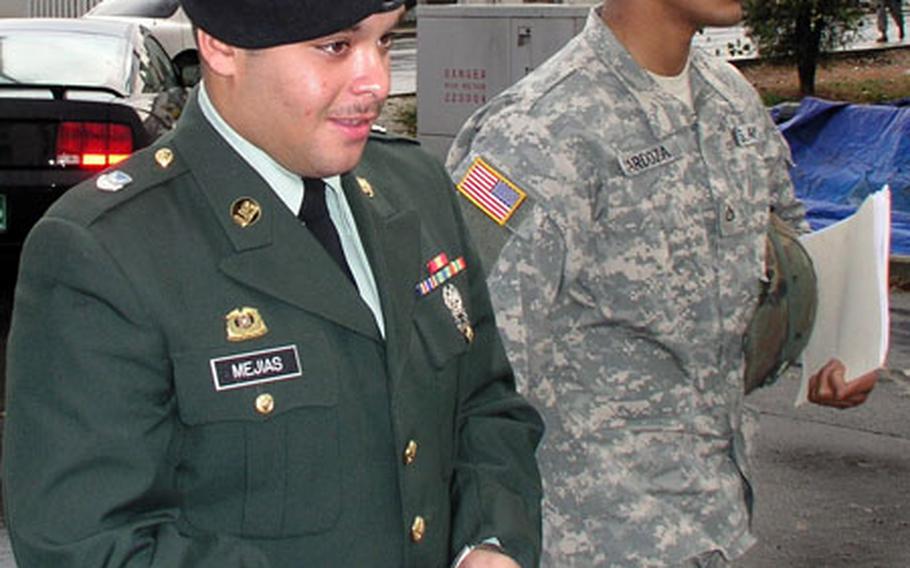 At Camp Humphreys, South Korea, on Wednesday, Army Pvt. Mitchel Mejias Jr., 20, left, of New Hampshire, is escorted in handcuffs to a vehicle that was to take him to the Camp Humphreys jail. Mejias faces nine months in prison and a bad-conduct discharge after pleading guilty Wednesday to an array of charges that included assaulting and being disrespectful to officers and sergeants, and being drunk and disorderly. (Franklin Fisher / S&S)

CAMP HUMPHREYS, South Korea &#8212; A 20-year-old Army private was sentenced Wednesday to two years in prison and a bad-conduct discharge after pleading guilty to numerous offenses that included assaults on officers and sergeants and sexually explicit insults about two officers and their wives.

Other offenses included several incidents of underage drinking and destruction of property.

Under an agreement, Mejias will serve nine months in jail, with four days knocked off for time he spent confined before his trial.

He was tried by Army Col. Gregory Gross, chief judge for the 6th Judicial Circuit.

According to the prosecution, the offenses began June 5, when Mejias showed up drunk for work and got into a shoving match with another soldier.

When a sergeant from his unit moved to break it up, Mejias grabbed the NCO&#8217;s arm and pushed him against a wall, scratching him. Another NCO stepped in, wrestled Mejias to the ground and kept him in a headlock.

Some time later, Company E commander Capt. Joel Gleason arrived. The NCO was told to release the headlock and Mejias was told to stay on the ground face down. But when Mejias began to rise, the NCO resumed the headlock while Gleason and other unit leaders rushed forward to help restrain Mejias.

Mejias began to flail his legs and in the process caught Gleason in the shin and the unit first sergeant in the foot, the prosecution said. Mejias then unleashed a profanity-laced tirade against the NCO and Gleason, he admitted in court.

Military police arrived, handcuffed Mejias, and he spat on one of the MPs before they put him in their vehicle, he told the judge. Inside the vehicle, Mejias kicked and struggled with MPs, threatening them with harm if they didn&#8217;t remove his handcuffs.

Mejias returned to Camp Humphreys at 2 a.m. &#8212; after curfew &#8212; and MPs apprehended him at the gate. He was taken to the post medical clinic for a blood alcohol test.

Returning to the barracks from the clinic, Mejias spoke using expletives to his platoon leader, Capt. Joseph Clark, about his wife. Mejias told the judge he also tried to fight a staff sergeant once he was back at his barracks.

Several weeks later, on July 19, NCOs checking barracks rooms found Mejias passed out after consuming tequila and several bottles of beer. He was taken to the clinic and ordered to take a blood test, but Mejias left.

July 30 brought another drinking incident and Mejias was again ordered to the clinic for a blood alcohol test. Once more, Mejias left the clinic and returned to his room, where his platoon sergeant found him asleep.

But as he was being readied to be returned to the clinic, Mejias broke a glass pane in a door and cut his hands. At the clinic, he smeared blood on the clinic walls, tore up signs, banged on doors and spoke abusively to clinic staff.

Defense lawyer Capt. Jack H. Ko asked Gross to give Mejias a bad-conduct discharge only, saying alcohol had been at the root of Mejias&#8217; misconduct and that a lengthy prison term would impede treatment for his drinking problems.

Following sentencing, Mejias was handcuffed and driven to the Camp Humphreys jail.