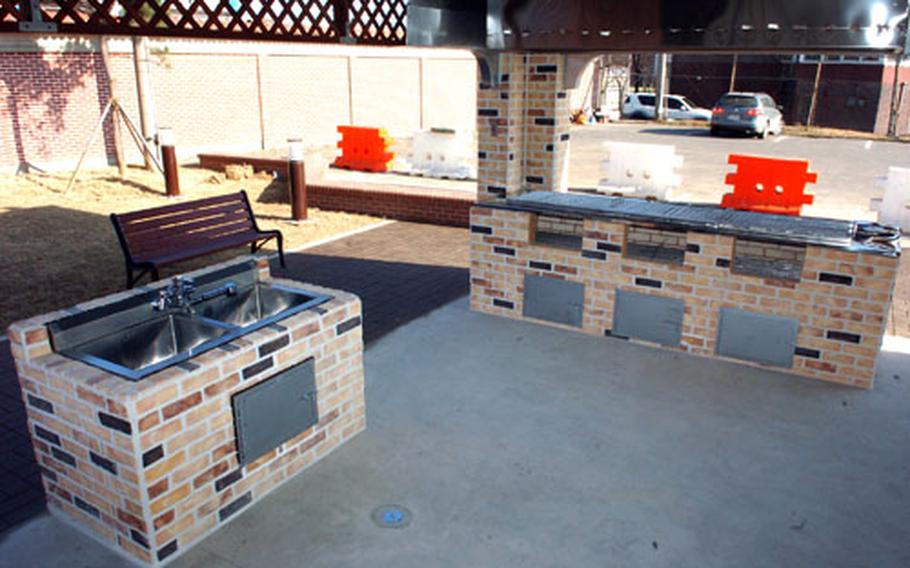 At Camp Humphreys in South Korea Wednesday, this newly built "barbecue gazebo" just inside the pedestrian gate awaits a Friday ribbon-cutting ceremony before going into use. The gazebo will allow units and organizations to hold fundraiser barbecues, selling food and beverages to troops and families. The grill is at the right. (Bob McElroy / Courtesy of the U.S. Army)

PYEONGTAEK, South Korea &#8212; A new &#8220;barbecue gazebo&#8221; inside the Camp Humphreys pedestrian gate will officially be ready for some grilling after a ribbon-cutting ceremony set for 11 a.m. on Friday.

Brick-built with a metal roof, the gazebo is equipped with a hooded charcoal grill, counters, cabinets, a sink with running water, lights and electric outlets. It accommodates six picnic tables.

Units and organizations on Camp Humphreys will be able to reserve the space for fundraising events, post officials have said.

In the past, hosting a fundraiser barbecue inside the walk-through gate was something of a makeshift proposition, McElroy said.

Typically, units would sign out a portable, fold-out canopy for shelter and would have to bring their own tables and grills, set up, then pack up everything afterward, he said.

Now they have a permanent structure in a convenient location, McElroy said.

And &#8220;for the soldiers who actually buy the food there, it gives them a nice place to sit down and eat their hamburgers or hot dogs.&#8221;