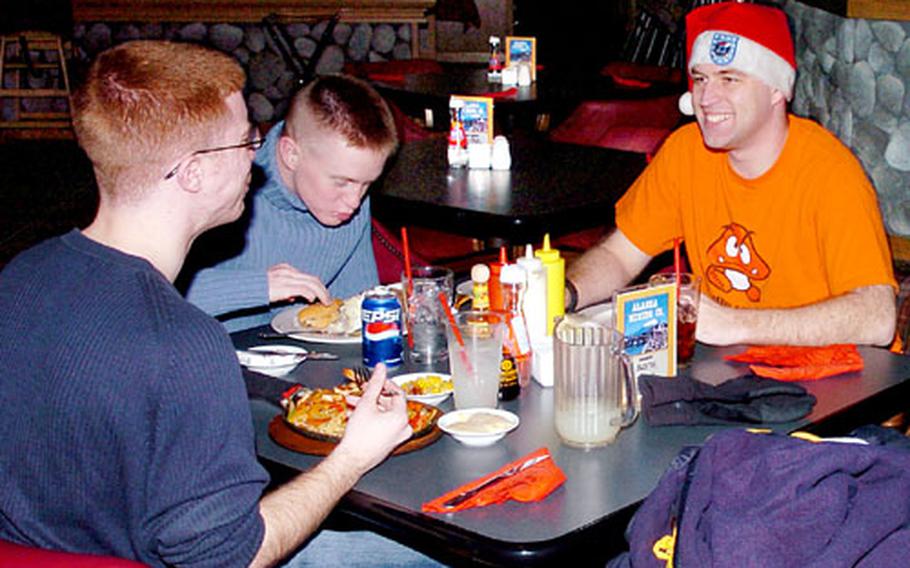 It&#8217;s called the Alaska Mining Company, has two totem poles outside and is open from 7 a.m. to 9 p.m. seven days a week. It&#8217;s on the former site of the Nitewatch II club, which it replaces.

The Army spent about $500,000 to transform the former Nitewatch II into a full-service restaurant that&#8217;s as suitable for families as for single servicemembers, said Mike Ross, business manager with the Area III Support Activity at Camp Humphreys.

Where the former Nitewatch II &#8220;was an old-fashioned Army club,&#8221; the Alaska Mining Company will offer community members &#8220;definitely a relaxing atmosphere for them to take their friends and family to dine,&#8221; Ross said.

The renovation was finished Nov. 30, said Ross, and officials formally marked the opening on a snowy Wednesday afternoon with a ribbon-cutting ceremony.

The restaurant&#8217;s Pacific Northwest theme is expressed partly through the attire of the waitresses &#8212; red and black flannel shirts along with blue jeans and red suspenders &#8212; wagon-wheel chandeliers, a fireplace (gas flames), and &#8220;lots of pictures of Alaska, old mining pictures, antique mining equipment and such &#8212; picks, shovels, gold lanterns,&#8221; Ross said.

The restaurant serves breakfast, lunch and dinner, and has a separate children&#8217;s menu.

But for now, dinners will have to be ordered from the lunch menu, which includes a steak and two seafood offerings. A separate dinner menu will be introduced sometime after the New Year.

Call the Alaska Mining Company at DSN 753-3101 for more information.