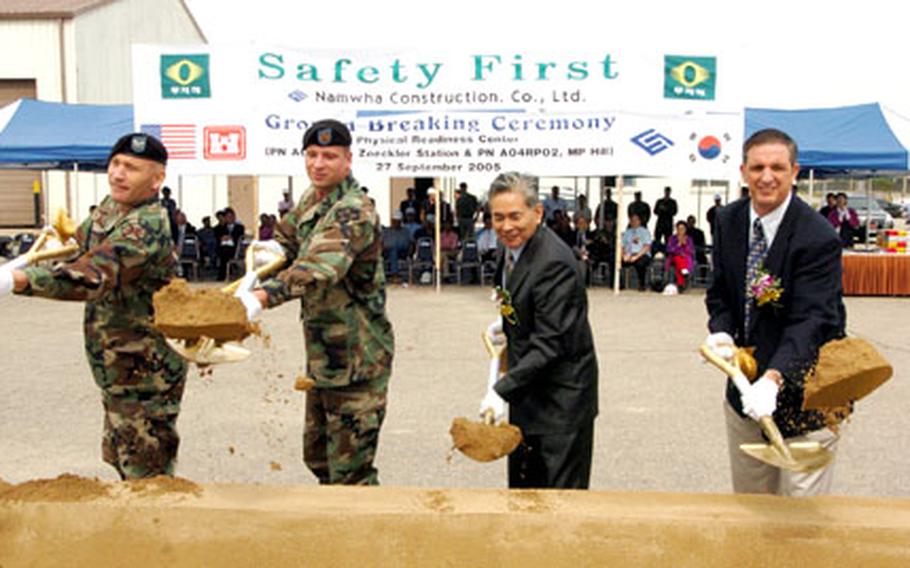 Officials take part in the groundbreaking ceremony. Work is set to start next month and finish sometime in spring 2007. (Christopher B. Stoltz / S&S)

Officials take part in the groundbreaking ceremony. Work is set to start next month and finish sometime in spring 2007. (Christopher B. Stoltz / S&S) 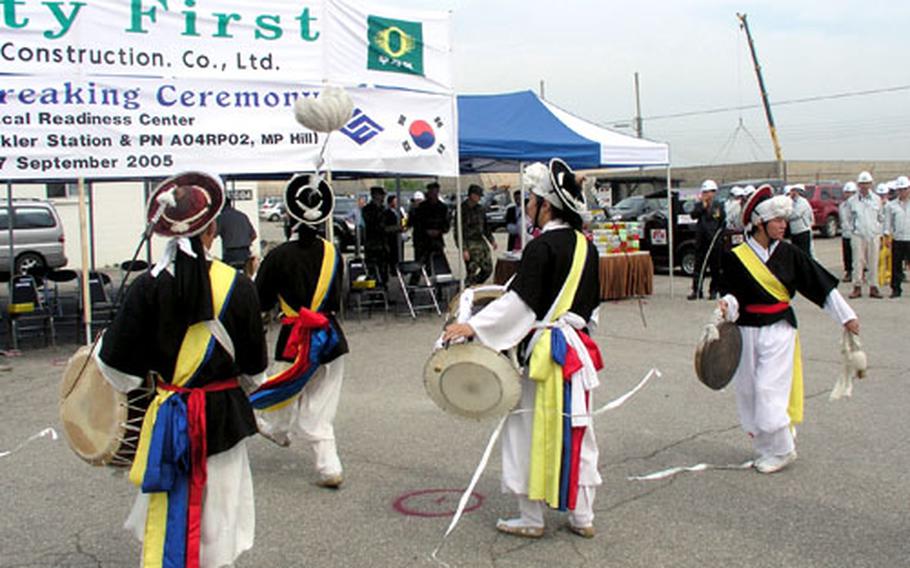 Korean dancers in traditional costume perform at the groundbreaking ceremony for the new gyms at Camp Humphreys. Officials said the facilities will give troops more and better ways of keeping to a battle- ready standard of physical fitness. (Franklin Fisher / S&S) 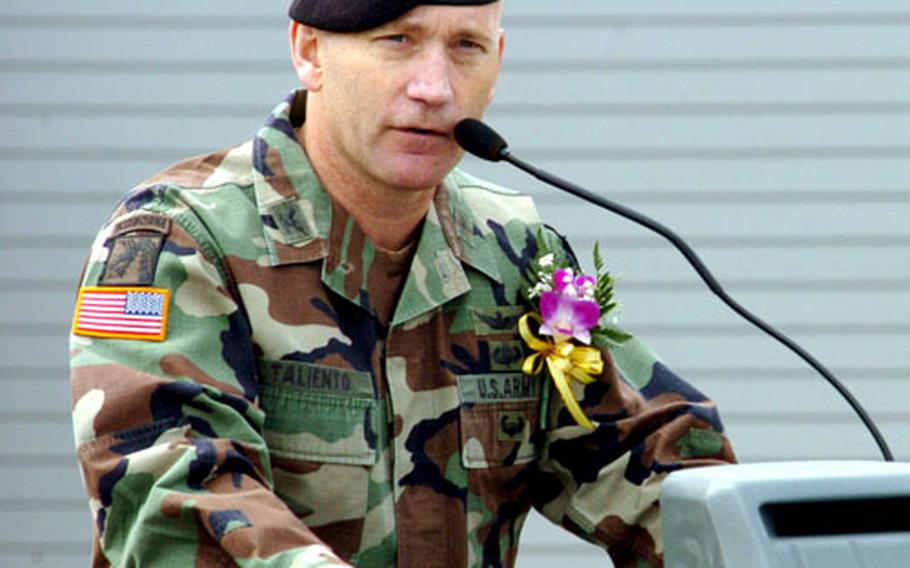 At Camp Humphreys on Tuesday, Col. Michael J. Taliento Jr. hails the start of a 14.5 million construction project that will give the installation two state-of-the-art gyms. (Christopher B. Stoltz / S&S)

CAMP HUMPHREYS, South Korea &#8212; Pile drivers soon will be heard here as two state-of-the-art gyms are built to give soldiers more ways to keep fit and more room to do it in.

Work is to start in October on the identical &#8220;physical readiness centers,&#8221; officials said. Both are to be done by spring 2007, said Greg H. Reiff, U.S. Army Corps of Engineers resident engineer at Camp Humphreys.

They&#8217;ll be bigger and better-equipped than the post&#8217;s existing gym, which was built in 1976, is showing its age and often is crowded, said Jim Howell, Area III Support Activity community recreation director.

Each gym will have an aerobic room with its own sound system, a cardio-respiratory area, weight room, 27-foot-high rock climbing wall, rope climbing, a combat room for boxing and martial arts, separate saunas for men and women, shower and locker rooms and offices, Reiff said. The existing gym has a single &#8220;co-ed&#8221; sauna shared by men and women who typically wear sports clothes, he said.

Total project cost is $14.5 million, Reiff said, with each 45,000-square-foot, two-story gym costing about $7 million. The Namwha Construction Co. Ltd. is to build the gyms under contract with the Corps of Engineers.

Each will have two full-sized basketball courts that can be divided into six smaller courts by using curtains. The courts have automated retractable bleachers and backboards, Reiff said.

The gyms will have two racquetball courts each.

One gym will be built at the MP Hill area in the western part of Camp Humphreys, the other at Zoeckler Station on the eastern part of post. An existing gym in the post&#8217;s &#8220;Downtown&#8221; area eventually is to be demolished.

Officials gave the project a formal kick-off Tuesday morning with a groundbreaking ceremony at the MP Hill site.

In brief remarks, Area III Support Activity commander Col. Michael J. Taliento Jr. hailed the project as yet another signal of the U.S. military&#8217;s commitment to make Camp Humphreys its premier installation in South Korea. &#8220;This is all about transformation,&#8221; he said.

In an interview after the ceremony, Taliento said, &#8220;The current facilities are incapable of meeting the commanders&#8217; requirements&#8221; for keeping troops fit, but the new gyms will give both more space and more equipment for robust fitness programs.

In addition, Taliento said, the three will be be more convenient for troops. Instead of having to take a bus across post, troops would be able to walk to the gym nearest their part of the post.

Camp Humphreys occupies about 1,230 acres in the Anjung-ri section of Pyeongtaek, 45 miles south of Seoul. The U.S. military plans major construction at the installation, which eventually will triple in size, becoming the main U.S. installation in the country.