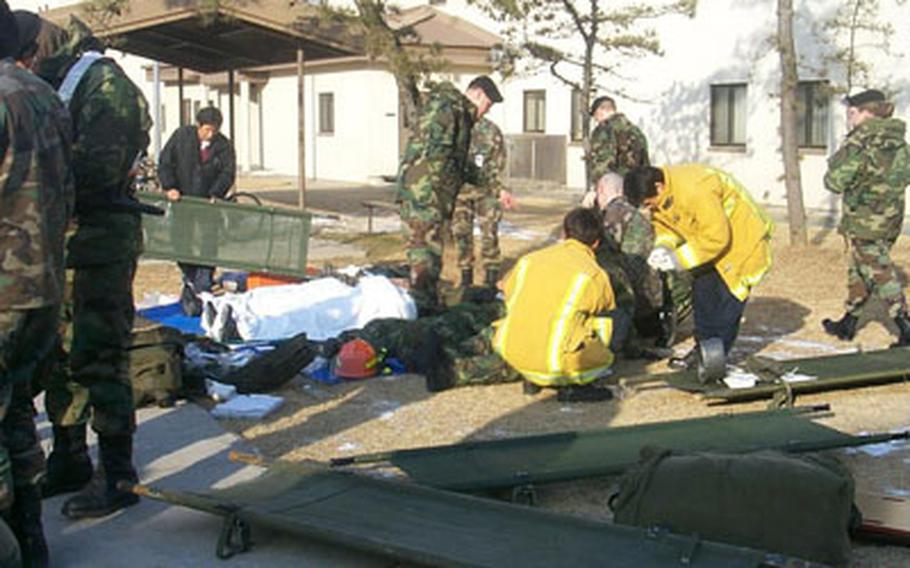 PYEONGTAEK, South Korea &#8212; The Army at Camp Humphreys will hold an anti-terrorism exercise Monday to test the community&#8217;s ability to work through an actual terrorist attack.

&#8220;We use a simulated terrorist incident to check our notification procedures and our ability as an installation and an area to respond to an incident,&#8221; he said.

Area III officials said they&#8217;re not disclosing the type of incident they&#8217;ve scripted because they don&#8217;t want to lose training benefits that can result from surprise.

Officials will use their mass-notification system to alert the community, Teague said.

A team of U.S. Forces Korea observer-controllers will be on the move watching for what strengths and weaknesses show up throughout the exercise. They&#8217;ll then brief the command. &#8220;They give us immediate feedback at the end of the day,&#8221; Teague said.

The exercise allows Area III to document deficiencies and &#8220;best practices,&#8221; he said, which lets the command make changes to support the anti-terrorism program.

Taking part along with Camp Humphreys&#8217; &#8220;first responders&#8221; &#8212; military police, firefighters and medical personnel &#8212; will be South Korean military and police elements on and off post, Teague said, so U.S. forces also will be testing their ability to operate with their South Korean counterparts.

The training is expected to pose some disruption to the installation&#8217;s routine on Monday, he said.

Officials said Camp Humphreys residents can get more information about gate closures and other possible changes by calling the staff duty officer at DSN 754-6111.