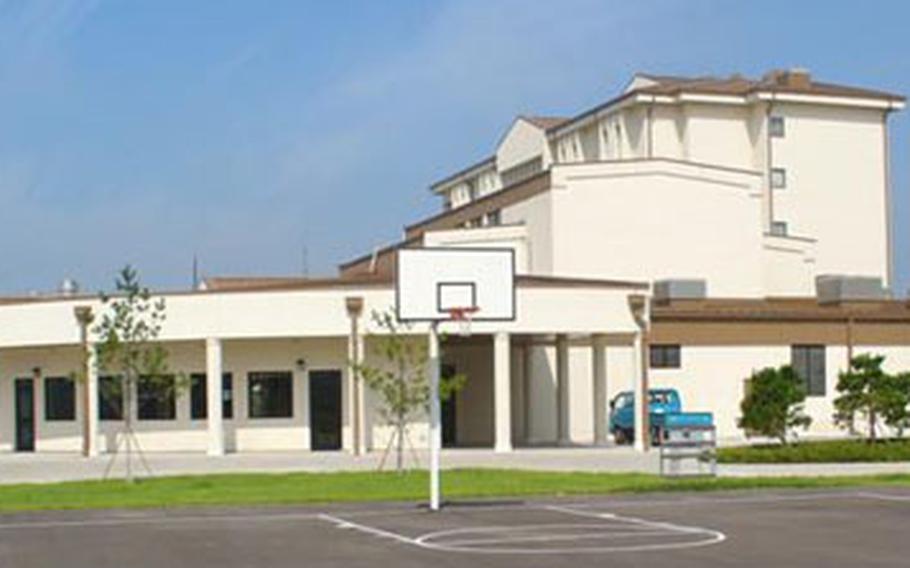 Officials plan a Nov. 9 grand opening for this newly built twin barracks-dining hall complex in Camp Humphreys’ Zoeckler Station section. The Army says the $27 million complex is the biggest of its kind in South Korea. The dining hall is in the foreground and one of the two barracks is behind it to the right. (Courtesy of U.S. Army)

The $27 million complex in the post&#8217;s Zoeckler Station section consists of two six-story barracks and a one-story dining hall that can serve about 376 servicemembers per meal. The complex also features volleyball and basketball courts and a covered picnic area.

About 110 soldiers had moved into the barracks as of Wednesday, Barkley said. They began moving in Oct. 15. The dining hall has been serving three meals daily since Oct. 21.

Each 102-room barracks building can house two soldiers per room.

Rooms have a bathroom with shower and are wired to accommodate phone, Internet and cable TV hookups.

Each building has an exercise room, laundry room and mud room on the first floor; a common kitchen on the second; storage areas on the third, fourth and fifth floors; a lounge on the sixth, and two elevators, said Greg H. Reiff, resident engineer for the U.S. Army Corps of Engineers&#8217; Far East District resident office, Camp Humphreys.

The new barracks now house soldiers from the 532nd and 3rd military intelligence battalions. Soldiers of the 527th Military Intelligence Battalion are to begin moving in later, Barkley said.

The grand-opening ceremony is to be followed by guided tours of the barracks and dining hall.

The dining facility, normally for servicemembers only, will offer a special grand-opening lunch open to others in the post community, including Defense Department civilians, Korean employees, retirees and family members, Barkley said. Those without meal tickets may purchase lunch, she said.

Meanwhile, construction continues at Camp Humphreys&#8217; MP Hill section on a similar but even larger barracks-dining hall complex, Barkley said. Two eight-story barracks towers and a dining hall that can serve 1,300 troops during a single mealtime are part of a $55 million project that also includes additional construction elsewhere on post.

Construction on the MP Hill complex began in August and is to finish in June 2008.