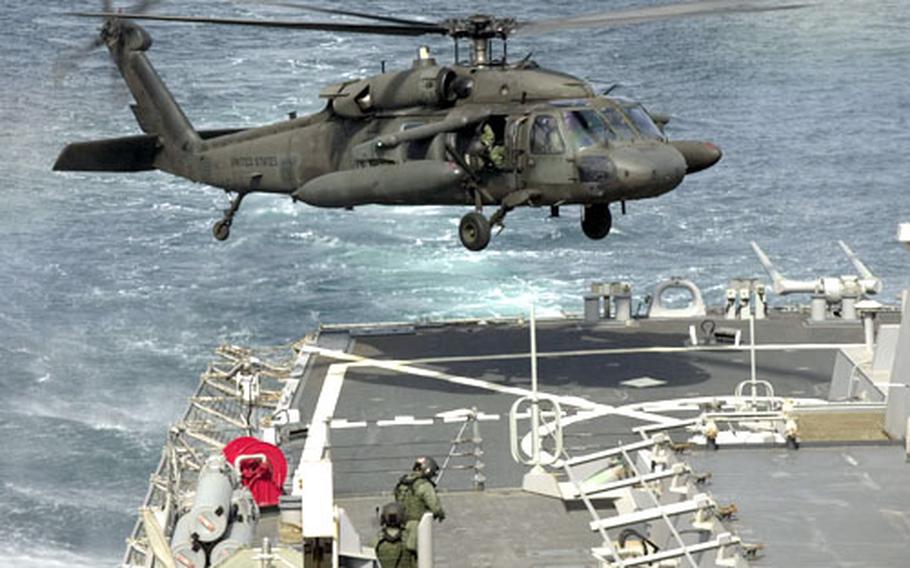 An Army UH-60 Black Hawk comes in for a landing on the back deck of the USS Curtis Wilbur during training Monday off the west coast of South Korea. (T.D. Flack / S&S)

An Army UH-60 Black Hawk comes in for a landing on the back deck of the USS Curtis Wilbur during training Monday off the west coast of South Korea. (T.D. Flack / S&S) ABOARD USS CURTIS WILBUR &#8212; From hundreds of feet in the sky and behind the controls of an Army UH-60 Black Hawk, a landing zone can look as tiny as a postage stamp.

But when the landing zone is on the back of a U.S. Navy destroyer at sea, pilots say that tiny postage stamp moves up, down, left, right and forward into the wind at about 6 to 12 mph.

&#8220;I&#8217;m a little bit nervous,&#8221; admitted Chief Warrant Officer Adam Kohl before heading off to rendezvous with the USS Curtis Wilbur off South Korea&#8217;s west coast on Monday. Kohl was among a group of Army pilots who conducted deck landing qualifications that day.

Kohl and his fellow pilots practiced at Camp Humphreys, landing on a painted &#8220;safe haven&#8221; pad to simulate the back of the ship. They also learned to escape safely if they end up in the water during the training.

Each pilot, following the directions of a qualified instructor, was required Monday to land at least five times on the back of the destroyer, as seas thrashed from the rotor wash.

Helping the pilots land were helicopter crew chiefs, who could be spotted leaning out the Black Hawk windows, counting down the distance to the deck.

After the first landing Monday, the helicopter was met by deck seamen standing &#8220;chock and chain&#8221; duty. While the blades still whirled overhead, the sailors sprinted to the helicopter to secure it to the deck.

Seamen Jeremy Jefferson said the goal is to chock the wheels and chain the helicopter to the deck before the ship rolls or pitches.

The sailors, familiar with Navy helicopter deck landings, indicated Monday&#8217;s training with the soldiers offered a welcome change of pace. Sailors videotaped and shot photos of the helicopter, which barely fit on the landing zone.

O&#8217;Donnell&#8217;s sailors were busy maintaining a &#8220;wind envelope&#8221; for the pilots. They do that, the captain said, by keeping a steady course at a certain speed with the right wind direction and wind speed. That gives the pilots the ideal landing situation, he said.

The Curtis Wilbur and other ships from Destroyer Squadron Fifteen are in the waters off South Korea taking part in the Foal Eagle training exercise, according to Navy officials. The sailors are training with both U.S. forces and members of the South Korean military.

Navy Capt. Robert Girrier, the destroyer squadron commodore, was on the Curits Wilbur on Monday. The yearly exercise is &#8220;all about working closely &#8230; with our [Republic of Korea] counterparts,&#8221; he said.

When the Black Hawk finally touched down again at Humphreys, the air crews trudged back into the office to strip out of the special dry-suits they wear while flying missions over cold waters.